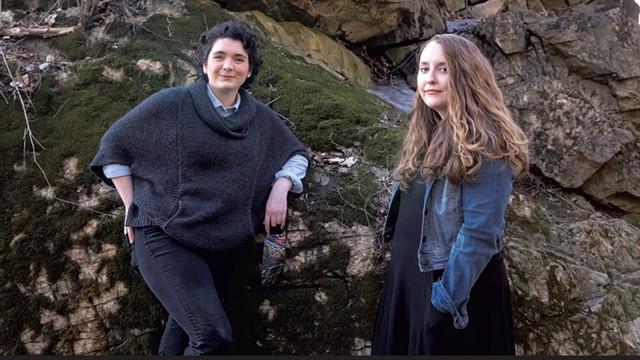 It started with something small: a suspicious spot so tiny it fit inside a freckle. In late 2019, Burlington singer-songwriter Alexa Woodward noticed the strange mark on her shoulder and sought medical attention. It was quickly diagnosed as a malignant invasive melanoma, one of the most insidious cancers. Emergency surgery followed, then a painful recovery.

After the operation, Woodward, now 38, found out she had cleared the margins — meaning the surgery had successfully removed the melanoma. In early March 2020, just as she was feeling well enough to return to the world, the world shut down.

"By March, when I was mobile enough to actually hold my ukulele again and my banjo ... the pandemic hit, and we were just hunkered down," she recalled.

The pandemic has been a productive time for many artists. But the South Carolina native explained that she had been creatively stagnant for years — her last record, Might Nigh, came out in 2014. Not coincidentally, at the time of that album's release show, Woodward was seven months pregnant.

"Having a kid was a very intense creative experience," she explained. "I kind of had, I guess, writer's block for a few years, putting all of that creative energy into [my] child. There wasn't space."

But just prior to her melanoma diagnosis, Woodward had begun writing again in short spurts. Bits and pieces of songs lived as voice memos on her phone. With a renewed sense of purpose following her bout with cancer, not to mention the life-altering reality of the pandemic, she reached out to some old collaborators to record remotely.

The resulting EP is an indie-folk exploration called Voyager. But what sets the project apart are its music videos. For those, Woodward teamed up with a work colleague, data visualization artist Jane Adams, to bring her six songs to life through artificial intelligence-derived visuals that enhance the profound, introspective declarations in her lyrics. The videos incorporate familiar natural elements, such as fire, landscapes and the cosmos. But how they're presented — some like impressionist oil paintings come to life, for example — is bewildering and beautiful.

In the 2000s and early 2010s, Woodward was a full-time, internationally touring musician. She was prolific during that era, releasing four albums between 2008 and 2014. But she eventually transitioned into a more conventional career path, citing exhaustion, a need to pay off student loans and, she said, "feeling like a trucker."

Woodward holds a law degree from the City University of New York, and Adams, 26, graduated with an MFA in Emergent Media from Champlain College. Both currently work at the University of Vermont. The former is the assistant vice president for corporate and foundation relations and principal gifts, and the latter is the data visualization artist-in-residence with UVM's Vermont Complex Systems Center. Adams is also the lead organizer for Vermont's chapter of Womxn in Machine Learning and Data Science.

The two met through their work with UVM's MassMutual Center for Excellence in Complex Systems and Data Science. Announced in 2018, the insurance company's $5 million endowment funds projects and research related to health and wellness trends, employing exploratory visualization tools in an effort to understand population health dynamics over time.

"I have a thing for distilling things down to their essence." Jane Adams tweet this

After many conversations, working dinners and socializing via Instagram, a friendship blossomed between Woodward and Adams. Woodward soon became intrigued by some original digital artwork that Adams had posted online.

"They looked like hand-drawn animations, almost, but had obviously been generated by something else," Woodward recalled.

Adams creates digital art using artificial intelligence machine-learning tools called generative adversarial networks, or GANs. Though popular with artists, GANs can be used broadly in many scientific and technical applications, such as the mapping of dark matter in the universe.

"I don't think that the creators of GANs ... really had in mind the applications that people are using them for with art nowadays," Adams said.

Though she cops to a certain level of gross simplicity, Adams explained GANs in the following terms: Two neural networks, called "the generator" and "the discriminator," engage in a cycle of creation and rejection until the desired outcome is obtained.

The results of such processes can be seen on websites such as thispersondoesnotexist.com. The site displays headshots of average-looking people. But, as indicated by the URL, these seemingly real faces are complete inventions created by GANs.

"My background in design has definitely helped me in terms of how to create something that is compelling and eye-catching and simple," Adams said. "I have a thing for distilling things down to their essence."

That's a good way to describe the Voyager music videos.

"We realized we could look lyrically at each of the songs and find image databases that connected to some of the core lyrics," Woodward explained.

For example, "Waiting on You" is about Woodward's struggle with belief in God as a former Christian. The song catalogs her musings on the ultimately unknowable conundrum.

"I've been waiting on you / If you're there / Could you say something?" she sings.

The gauzy acoustic tune drips with reverb, as if Woodward were playing it from a cathedral dais. The track features Texas-based singer-songwriter Linky Barmore and Daniel Machado of South Carolina outfit the Restoration, who contribute vocally and instrumentally throughout Voyager.

The video features hyperreal images of forests and deserts. They melt, swirl, recede and merge with one another, curling up and spreading out in fluid motion. It seems to consider the vastness of Earth and its extremes — a bit like the difference between heaven and hell.

"I've always loved how much [Woodward's] lyrics relate to the natural world," Barmore wrote in an email. "Those motifs are seen again on Voyager, although here she has focused her lyrics more inward."

The other videos follow suit. "Survival," the EP's opening cut, is represented through an elemental force: fire.

"This is your one chance to live / The world is a story and you're writing it," Woodward sings as flames burst to life and snuff themselves out. Given her recent confrontation with mortality, not to mention the summer of protests that inspired the song, the music and its visual representation work in tandem, enhancing each other.

Right now, the videos are all available to view on YouTube. But Woodward and Adams want their work to be viewable in a more traditional artistic space. Barring any pandemic-related delays, they will present in City Hall Park as part of a new Burlington City Arts event series called Flicks in the Park. The film-centric run begins in early June. Woodward and Adams are scheduled for Thursday, June 24.

Though Voyager was born out of a terrifying reality, it ultimately realigned Woodward's creative mojo.

"It sets you on a different way of thinking about how much time you have to be here, and be with people, and create things," Woodward said.

Voyager is available at alexawoodward.bandcamp.com. Watch the visual album on YouTube. View Adams' artwork at linktr.ee/nodradek.