Aleck & Ivy, The Freak Beneath 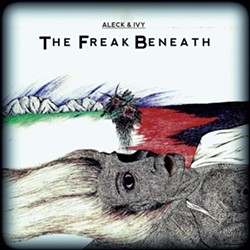 A little more than a year ago, Vermont ex-pat Aleck Woogmaster and Portland, Ore., singer-songwriter Ivy Estelle released their debut EP, Sticks in the Mud. The seven-song teaser was uneven but interesting, promising better things to come.

With the arrival of the duo's first full-length album, The Freak Beneath, it's clear they really were cooking up something new. And, appropriately, they've rebranded as simply Aleck & Ivy. The EP often sounded like two solo artists collaborating; their latest release suggests they've fused into a single organism.

One big change is the music itself. On their last outing, Woogmaster and Estelle relied on beats from Burlington rapper/producer Face One. But this time around, they've taken a DIY approach that's built around looping instruments live. Turns out, they've got a knack for it.

Sonically, The Freak Beneath hails from the early days when house music was still inseparable from hip-hop and drum machines ruled the Earth. It's consistent to a fault, and you might wish they'd used a more diverse palette, especially for the percussion. Still, the arrangements are tasteful and strong. And producer Third Seven's mastery of the effects chain makes the album sound more like late Radiohead than vintage RUN-DMC.

This is an exceptionally sequenced work. A lot of attention has been paid to both pacing and smooth transitions. Indeed, the first five tracks are damn near seamless. The lyrics are equally interconnected, as themes and motifs reappear in new permutations without ever wearing thin. This is perhaps the most impressive aspect of The Freak Beneath: Despite bursting at the seams with ideas and images, it still comes off as a focused project.

Estelle has really come into her own. Her voice sounds stronger and more assured. She also steps up as a rapper on many songs, proving herself an able counterpoint to Woogmaster's dense, stream-of-thought flow. In fact, one of the best songs on the album is "July," a beautifully written heartbreaker about the death of her older brother.

Woogmaster has also improved. His verses here are some of the sharpest compositions of his career. His cadence is more intricate and rhythmic, but what really stands out are the mixed metaphors and layered wordplay. His a cappella piece, "Rust in Piece (Worthy)," is perhaps his best performance yet: thoughtful, sly and still shockingly honest. For a guy who used to use the mic as a Molotov cocktail, the maturity and restraint he shows here is a dramatic change.

How it happened is no mystery. If anything, the process behind personal growth is the core theme of the project. Aleck & Ivy are constantly in dialogue, talking things through, alternating between counterpoint and commentary. If this album is any indication, their live show must be somewhere between a house party and a group psychotherapy session, and something well worth checking out.

The Freak Beneath by Aleck & Ivy is available at aleckandivy.com. Aleck & Ivy appear on Thursday, September 15, at the Monkey House in Winooski; Saturday, September 17, at Elmhill, Inc.'s 50th anniversary party at the Maplehill School & Community Farm in Plainfield; and Wednesday, September 21, at Nectar's in Burlington.