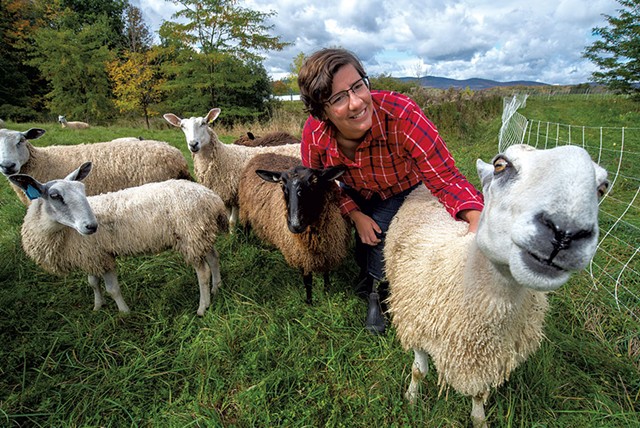 Sheep farmer Annie Hopper had so much wool piling up in her barn that she was using it to insulate her chicken coop. Katie Sullivan had a truck, expertise and an idea.

The two met at a pasture management conference in 2018. A year later, Sullivan purchased 50 pounds of wool from Hopper and started her business, Bobolink Yarns. Now she works as a sort of yarn broker, gleaning wool from Vermont farmers who are raising sheep for meat, milk or fun. Sullivan has the wool milled, dyes it herself and then sells it at a premium through stores and wool shows.

By serving as a connection between the state's widely scattered sheep farmers and their markets, Sullivan has found a way to promote the fiber world she loves. Right now, she's just a small player in a large and complex industry; her goal is for the business to become bigger. Meanwhile, she's one of the few people in Vermont who actually make a living — albeit a meager one — through sheep farming.

"All of us have other careers," Elaine Fortin, a board member at the Vermont Sheep & Goat Association, said of the sheep farmers she knows. She's a retired software engineer who teaches swimming.

"I can pay more because I'm willing to market local wool as a premium product." Katie Sullivan tweet this

Sullivan grew up in a New Hampshire family that was deeply involved in the fiber arts. After a few other career starts in agriculture and social services, she knows she's lucky to spend her days handling wool and using her gift for color and dyeing.

"My secret weapon is that my mother is a lifelong knitter and wrote my patterns," Sullivan said. Her small home in Albany is piled high with yarn and the kits she creates with materials to make hats, socks and mittens. "I was an infant in a basket the first time I went to a yarn shop."

Nobody knows exactly how many people are raising sheep for wool in Vermont, or how much they produce. According to the state Agency of Agriculture, Food and Markets, there were 704 sheep farms in Vermont in 2017, most with fewer than 50 animals.

Wool can be the most lucrative product from sheep if it's treated and marketed properly. But raising sheep for wool requires a level of care and marketing energy that shepherds who raise the animals for meat or milk often don't have.

Hopper, 29, raises sheep for meat. Until Sullivan came along, "honestly, I was putting it in a giant pile and ignoring it," Hopper said of the wool from her 90 ewes on Scuttleship Farm in Panton. Scuttleship can only get 50 cents a pound on the open wool market, called the wool pool, in New England, Hopper said. That makes Sullivan's $3 a pound a relative windfall.

Sullivan pays farmers more because she can use her experience and skill to sell the yarn at a premium. She buys wool from about a dozen farms. Two years into her business, Sullivan is still working through piles of wool that people have been storing for years. She usually purchases about 100 pounds at a time and then goes back for more.

The pandemic prompted a renewed interest in crafts, but it also put the brakes on the in-person wool and yarn sales where sheep farmers sell wool and the products they make from it. Many producers rely on events such as the annual Vermont Sheep & Wool Festival in Tunbridge, which moved online in 2020 and 2021, to sell their products. Rep. Carolyn Partridge (D-Windham) said she missed thousands of dollars in sales when the large wool shows in Maryland and New York were canceled last year. She's counting on this year's New York State Sheep & Wool Festival on October 16 to make up for some of last year's losses.

"If I can have a really good show, it will get me through the winter," said Partridge, who has been raising sheep for 40 years. If not, "it's the kind of thing where I might be spending a portion of my Social Security check to keep them fed. That's how it was last year."

The Vermont Sheep & Goat Association, which has about 175 members, has been trying to find better ways to market Vermont wool for years. For fiber producers who avoid social media, brokers such as Sullivan can help.

"I really enjoy the sheep, but I don't enjoy marketing anything," said Peter Wright, a physician at Dartmouth-Hitchcock Medical Center who raises 15 Shetland sheep on his Bosque Verde Farm in Norwich. He sells his wool through Norwich Knits, a local knitting and craft shop, but has many pounds of surplus. "It would almost take the fun out of it for me to spend time reaching out to Etsy." He hadn't heard about Sullivan's business.

Dave Martin, the president of the Vermont Sheep & Goat Association, has 70 ewes and has been selling wool for 30 years. While Fortin helped him use Facebook to sell wool online last year, he's not interested in doing that again.

"I don't have the energy to maintain it," said Martin, who lives in Underhill and sells some of his wool to Sullivan. "That's an issue with a lot of small-scale agriculture. You can grow the animal, but how do you market, as well? There's a limit to how many hours there are in a day."

Many sheep farmers keep just a few animals that are raised for meat, milk or wool. Whatever their purpose, the sheep generally need to be shorn annually, leaving farmers with a cache of wool. Sullivan looks for high-quality wool that is in good condition, has it milled, hand-dyes it and winds it into 7-ounce bundles called skeins.

Vermont wool isn't in demand like some specialty products, such as cheese and maple syrup, are. Most fiber artists are accustomed to the soft and processed wool produced in Montana, Australia and other dry places, Sullivan said.

"If you go into a regular yarn store anywhere in the country, it'll be piles of fine merino," Sullivan said. But in damp Vermont, that type of wool is difficult to produce. Vermont wool and yarn tend to be coarser and more durable.

"I can pay more because I'm willing to market local wool as a premium product, instead of apologizing for the wool being what it is," she said. "It's durable and a wool to create heirlooms from, and it's more interesting than yet another super-soft merino."

At her home, she held up some fine imported merino.

"This is the Little Debbie snack cake of yarns," she said. Then she proffered a loop of hearty Dorset yarn — named for a breed of sheep, not for the Vermont town — of the kind that makes scratchy but durable sweaters and mittens. "And this is your grandma's granola."

That "granola" is popular in northern New England, but Sullivan said she was laughed out of the yarn stores she visited while on a sales trip in Connecticut. Store owners said they loved the yarn, but their customers wouldn't buy it.

"There are cultural forces at work," she said. "People think softer is better. But softer means pills in your armpits and less durability. You can pay a tremendous amount of money to knit yourself a sweater that will only look new for a year or two."

She's finding plenty of takers, including tourists. Jen Carlo, who recently bought a store in Waterbury called Yarn, said she sold out of Sullivan's hat kit in September.

"A lot of visitors will come in and ask for specifically Vermont yarn," Carlo said.

Lily Trajman, who owns Norwich Knits, views Sullivan's business as a service to sheep farmers. She has a room set aside for locally grown or dyed yarn, including Sullivan's.

At $40 per skein, compared to about $5 for a skein of highly processed wool at one of the chain craft stores, Vermont yarn comes at a premium.

"It's mostly out-of-state people who want something of Vermont before they head back to wherever they came from," said Trajman.

She noted that there's a high hidden cost to the inexpensive, bulk yarn of unknown provenance used by most knitters. Much of it undergoes chemical treatment so the finished product can safely go into washing machines. The bargain prices probably reflect low pay for the people who produce that yarn thousands of miles away, Trajman said; shipping to distant lands increases the environmental footprint.

There could be other uses for Vermont's surplus wool. University of Vermont researcher Kimberly Hagan is experimenting with using wool pellets as fertilizer; Hopper sold her 500 pounds of wool this year. If pellets turn out to be a viable product, that would make things easier for farmers, Hopper said.

"Doesn't matter the color, the breed; you just put it in the grinder," she said.

Sullivan's in the fiber business because she loves the way the fiber looks and feels. She likes her friendly sheep, Bluefaced Leicesters, who graze near her home.

"My sheep have names, but I also eat them," she noted. When she crouched in the pasture on a recent day, three bottle-fed ewes competed for space to rest their chins on her. She's president of the Bluefaced Leicester Union of North America. And she's working with a farmer friend on a blanket-making project using a mill on Prince Edward Island.

Sullivan used to worry that the state would eventually run out of shepherds, putting the kibosh on her business.

"In Vermont, to put a fine point on it, a lot of the people in the sheep business are in the retirement and Social Security time of life," said Sullivan, who is 38. "Then I realized Vermont has an endless cycle of 55-year-olds who move here and get sheep and learn all about sheep, and stop when they are 75."

Younger people such as Sullivan have entered the business in recent years by buying yarn stores or starting farms. Partridge, who has been attending the huge New York State Sheep & Wool Festival for decades, credits knitting magazines for making the fiber arts appealing to a new generation.

The popularity of the New York festival, which drew 30,000 people in 2019, signals to Sullivan that her business can have staying power.

"More and more people are taking up knitting and handicrafts as something that is soothing and tactile and makes you feel you have gotten something done with your hands," she said. "They need that comfort. That is only good news for me and other Vermont shepherds."

The original print version of this article was headlined "Wool Gathering"