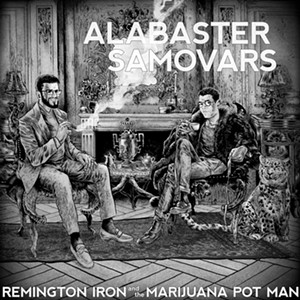 Alabaster Samovars is a rap duo that has, out of nowhere, dropped one of the best 802 albums of the year. Consisting of Burlington rapper the Marijuana Pot Man — yes, really — and Philadelphia producer Remington Iron, the two have delivered an eponymous 11-track magnum opus that's no fat, all frills.

Remington Iron spits verses here occasionally, and they're nice work. But the star of the show is, as he'd put it, "The Marijuana Pot Man, goddammit, I'm the shit/ got the embryonic salmon on my wrist." You can already see where this is going: He specializes in the same surrealist, supersize boasting that's brought fame to writers such as Ghostface Killah and Cam'ron.

The Marijuana Pot Man's "Underworld Dandyism" aesthetic is consistently funny stuff. He is far too creative for the joke to ever stretch thin, and he's a sharp rhyme writer besides. A lot of rappers will wish they'd thought of "the welterweight Walter White" first, but he is definitely the only one out here claiming, "my whip came equipped with a Poggenpohl kitchen."

The bars are brilliant, and I could probably pad the rest of this review with quotables. But it's the delivery that will really force listeners to decide whether Alabaster Samovars is their cup of oolong. The Marijuana Pot Man is deadpan, breezy to the point of sounding bored and always audibly amused by his own jokes. Whether you find that Mitch Hedberg flow endearing or kind of abrasive is a matter of taste.

Either way, it's distinctive. The Marijuana Pot Man's flow patterns are meticulous but camouflaged conversationally so everything swings — more Kool A.D. than MC Paul Barman.

In fact, I even entertained the paranoid notion that Alabaster Samovars was one of Kool A.D.'s innumerable side projects. It didn't help that Kool A.D. did a track with Remington Iron in 2017 in which he actually said: "Still got it, never lost it, alabaster samovars, paper thin parsnip."

To be clear, though: I was very high. The Marijuana Pot Man is his own animal, and quite good at it, too. When he claims, "I don't rap for fame, that could take the thrill out," you believe him.

Alabaster Samovars is a flawless victory on the beats. Producer Iron has been honing his art form for years, and this album is reminiscent of Dan the Automator in his prime. Educated heads will recognized many a loop here, but in true hip-hop form, he makes every break his own. It sounds huge, lush and quite psychedelic.

As a debut album, this is a knockout. It's a collection of strong singles that hang together perfectly, and even the skits are funny as hell. As a critic, I can't help but respect how every aspect of the album is tailor-fit for the Marijuana Pot Man's iconic style.

Alabaster Samovars is a labyrinth of elaborate dick jokes that still manages to be a mature piece of work. It's not for everyone, but any fan of beats and rhymes should at least listen once.

Alabaster Samovars is available on alabastersamovars.bandcamp.com and on SoundCloud.