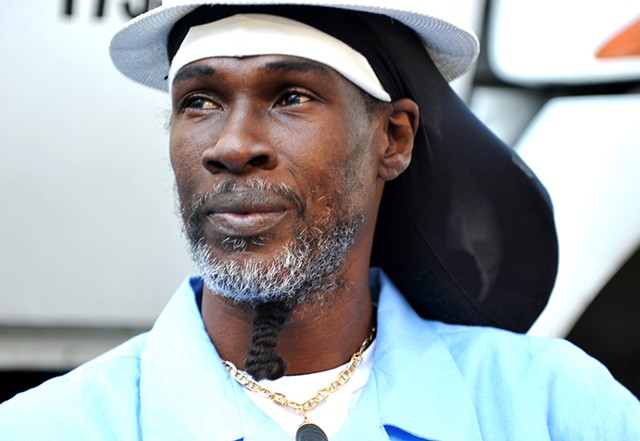 Vaughn Benjamin is best known as the leader and cofounder of the acclaimed St. Croix roots reggae band Midnite. Formed in 1989, that band is widely credited as a torchbearer of roots reggae, bridging the gap between the seminal work of artists such as Peter Tosh, Burning Spear and Bob Marley and the current generation of roots-reggae stars such as Jah9, Chronixx and Jesse Royal.

Last year, Benjamin reformed and renamed Midnite as Akae Beka. The band's membership is almost identical to Midnite's, save for Midnite cofounder and bassist Ron Benjamin. Vaughn Benjamin has been vague when it comes to his brother's absence, citing in several interviews, "Life changes, convictions and revelations."

He is more open to talking about Akae Beka's latest record, Homage to the Land. While the album is informed by roots reggae in style and scope, it bears a distinctly progressive sonic edge. That's especially true of the majestic horn and string arrangements, which frame Benjamin's soulful rasp throughout the record.

On Saturday, February 6, Akae Beka play at the Rusty Nail in Stowe. In advance of that show, Seven Days caught up with Benjamin by phone.

SEVEN DAYS: You're playing the Rusty Nail on Bob Marley's birthday. Obviously, his influence in reggae and beyond is incalculable. But what influence did he have on you personally?

VAUGHN BENJAMIN: The influence comes in multiple ways. It's not just melody and verse. It's about the roots and the history and the story.

SD: Both with Midnite and Akae Beka, you take a global perspective. You write a lot about politics and social issues. Would you say that approach was influenced by Marley?

VB: A global perspective is the responsibility of humanity. Just to know that you're one person here out of billions. The global ideal is to make sense out of the chaos. It is difficult, but it is the work before us. And I hope to make a difference in any way I can.

SD: Akae Beka is almost the same band as Midnite, minus your brother. His absence aside, what are some of the differences between the two groups?

VB: It's all part of the same conversation. I'm more or less putting forward what I've always put forward, which is original music, based in a historical view. We're just doing what we have always done. 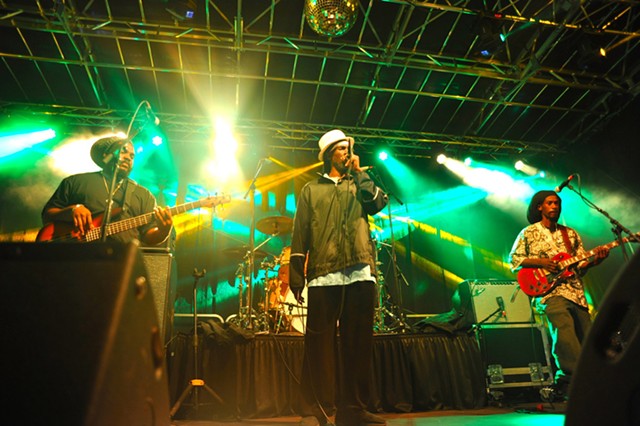 SD: Are you performing Midnite songs alongside Akae Beka material?

VB: All the things I sing I have written over the span of all the years. We basically deal with what the time represents, what's called for at the time. But I don't sing any music that I didn't create.

SD: Recently, a new generation of roots-reggae artists has begun to emerge, specifically from Jamaica, acts like Jah9, Kabaka Pyramid and Jesse Royal. Do you take any pride in the current roots-reggae revival?

VB: To be honest, it's more or less information-driven and principle-driven, the vibration that keeps people returning to roots and culture in music. So what you see is an extension of mind-sets around the culture. And it's a very good thing and a positive thing. So if someone wants to say that about us, I will be happy to humbly accept that as part of the work, you know?

SD: Especially given how popular dancehall has been, seeing a return to roots reggae, especially in Jamaica, has been encouraging for a lot of people.

SD: I was intrigued by the variety of arrangements on Homage to the Land. The album has a roots sensibility and feel but leans on progressive arrangements, especially in the horn and string parts. Were you consciously looking to push the envelope in that regard?

VB: Most of that just happened naturally. Traveling to Costa Rica, I met a lot of new players, the violin players. So it came from new interactions with new musicians. It seemed to me they were very professional but putting forward ideas to be offered to the King of Kings, and in that sense it was a beautiful thing.

SD: On "World Citizenship," why did you insert storm sounds, rain and thunder, into the mix? Were you making an explicit statement?

SD: In your own words, what does international morality mean?

VB: It is what exists now, what people decide is an acceptable mode of behavior for interaction between all of the different nations, and addressing what we would identify as moral breakdowns, from a worldwide, countrywide, even citywide perspective. It is a fact that these things haven't faded. There are still the same vices; there is still envy and corruption and greed and malice on the front pages of newspapers all over the world.

So it comes down to what the people agree about together again. It's not my place to say what some people agree isn't an acceptable mode of behavior. We can come together collectively and decide what is acceptable for humanity and then reinforce through mental and physical resources.

VB: But of course! It is relevant around the world, and America is a part of world interactions.

SD: We're about to begin the process of electing a new president. Do you have thoughts on the way the race is shaping up so far?

VB: As a Rastafarian, I always try to be aware of what the objectives are before us and what we can do to make things a little better. So I'm very aware of what is happening internationally. But I also try not to influence the outcome of any election to which I'm not a citizen of that particular state. So I'll keep those thoughts to myself. But I do know that being candid, being forthright, being truthful, the people who are most fundamentally based in principle, they will end up having the most appeal in times when people are in desperate situations and looking for stability.

SD: So Bernie, then?


The original print version of this article was headlined "After Midnite"