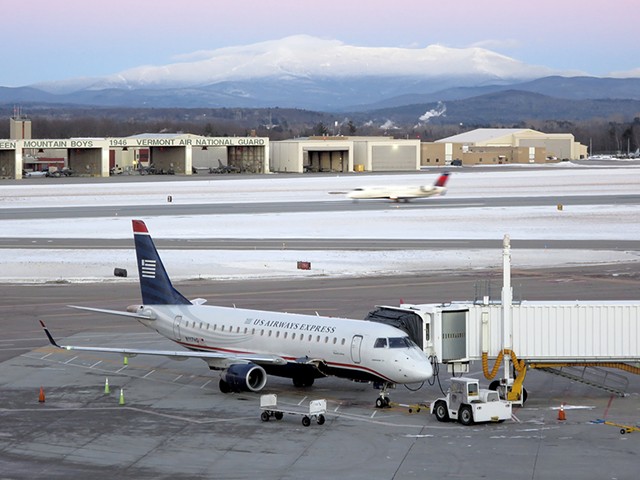 Snow frosted the trees across the street from Burlington International Airport last Friday. The sylvan stretch of open land resembles a park, but it's actually the ghost of a neighborhood that was razed under a controversial airport noise-reduction program that has taken 100 homes. Continuing buyouts have led some to question whether Vermont's largest airport is in the right hands.

The City of Burlington owns and manages the airport, even though its 950 acres are located in South Burlington. Burlington has operated it since not long after the first plane landed in 1920 on a former cornfield three miles from downtown Burlington.

With leadership from aviation buffs and Burlington business potentates, the fledgling enterprise grew and grew. Now Burlington is the largest property owner in South Burlington, and roughly 580,000 passengers fly in and out of the airport annually.

But tensions have grown, and not just from the buyouts. A dispute over the property taxes Burlington pays its neighbor for the airport spurred a lawsuit that was just settled last year. And many people in South Burlington are worried about the arrival in 2019 or 2020 of noisy F-35 jets at the airport's Vermont Air National Guard facility.

Earlier this month, South Burlington Councilor Tom Chittenden introduced a resolution that would ask Gov. Phil Scott to form a committee to examine the viability of shifting airport ownership to the state.

The airport is a regional economic engine controlled by just one city, and it's no wonder the arrangement is problematic, said Chittenden. "This is the root of a lot of our conflict and strife," he said.

Its text airs many of the complaints that are generating friction: that Burlington pledged to end the home buyout program but extended it with little notice last fall; that airport staff restrict the flow of information from the Federal Aviation Administration to South Burlington; and that the buyout program is eating a hole in South Burlington's affordable housing stock.

Burlington Mayor Miro Weinberger has seen the resolution. He's not a fan.

"The City of Burlington has stewarded this institution for decades and decades, and we've done it at some financial risk," Weinberger said during an interview.

There would need to be a clear and compelling case to change the governance, and it's not there, he added. "I think the airport is a success story," Weinberger said. "I think it's a real asset to the region."

BTV is the only municipally owned commercial airport in Vermont but certainly not the sole one in the United States. Cities own some of the largest airports in the country, including O'Hare International in Chicago. But many airports have outgrown city or town ownership and are now operated by regional governments, county authorities or states.

In 2012, when Weinberger was first elected mayor, the airport was struggling with expenses and debts. A committee formed to look at options, including transferring ownership to the state or a regional group.

The idea didn't go anywhere. That's partly because city leaders weren't ready to let the airport go, but also because other communities did not seem eager to take on any of the financial risk of shared ownership. "There wasn't a lot of enthusiasm," Weinberger said.

Passenger traffic and parking garage use have slumped at BTV as the Canadian dollar has weakened and Plattsburgh International Airport is increasingly competitive. In fiscal year 2016, the airport's operating revenue dropped 2 percent, largely due to continued loss of income at the garage. The hefty grant revenue that BTV gets from the Federal Aviation Administration and other sources helped the airport close a gap of $1.7 million between its operating revenues and expenses last year.

Tighter fiscal controls over the past five years have helped turn around BTV's financial health and improve the airport's bond rating in the process. As Weinberger sees it, the airport is in solid shape. It's assessed at $52 million. Burlington would need compensation for a transfer of ownership, Weinberger said.

The mayor concedes that Burlington and South Burlington have had "some recent tough issues" involving the airport. "We are in a time of some tension," he allowed.

But Weinberger insists the new round of home buyouts will be the last.

"We are going to bring the buyout program to a conclusion," Weinberger said. "I want to see it over."

He and airport director of aviation Gene Richards have made similar pledges before — but have not followed through, adding to tensions.

Not all of South Burlington's city councilors are convinced that a governance change is the solution.

"My initial reaction is, this would take a lot of investigating," said Councilor Pat Nowak, who is South Burlington's representative to the airport commission.

She has not taken a position on the resolution but said she has concerns. "There are so many pieces," Nowak said. "Does Burlington want to sell? Does the state want to take it over? Is there interest in the region to do this?"

Nowak voted to authorize more home demolitions last May at an airport commission meeting. Her critics claim she failed to communicate the scope of the program to her fellow councilors and constituents.

She disputes that she kept anything from anyone and says critics misinterpreted her vote.

During a January 23 council meeting, South Burlington patent lawyer and social justice activist James Marc Leas challenged Nowak about what she knew and when she knew it on the new home buyouts. In the wake of that verbal skirmish, Leas decided to run against Nowak in the March 7 election. The airport is a big part of his campaign.

Leas has proposed that South Burlington enact a home "replacement tax" that would require Burlington to pay a fee for every home it demolishes around the airport. Burlington, he points out, has a similar program to discourage gentrification through teardowns.

Leas compares the South Burlington home buyouts to the urban renewal demolitions that erased most of Burlington's Little Italy neighborhood in the 1960s.

It's time for South Burlington to assert itself, according to Leas.

"It seems like somebody has plans for South Burlington without consulting South Burlington," he said. "You know, we're not a colony. We're our own city, and we should have some say over it."

The real issue, he said, is the F-35s and the military-commercial nature of the airport. The powerful jets are too noisy and dangerous for a dense population area, and Burlington should be opposing the jets and helping the Air Guard find another location "far away from people," Leas said.

He's not the only one who is skeptical about a change in governance.

Helen Riehle, chair of the South Burlington City Council, also believes the F-35 noise is the real problem at the airport and that having a different owner wouldn't necessarily address that. But she's open to the discussion.

"I'm not ready to say whether I think it's a great idea or not," she said. "I can see some possible good outcomes, but I also can see the potential for really no change."

It would be a long road to a takeover in the legislature, predicted Riehle, who herself spent 15 years as a Republican state lawmaker.

A few decades ago, Vermont agreed to take over small airports around the state that were ailing, including ones in Rutland, Newport and Shelburne. Some lost money for a while, but federally funded improvements and higher fees helped turn them around. Today, eight of the 10 state airports are operating in the black, according to Guy Rouelle, aviation program administrator at the Vermont Transportation Agency.

Riehle noted that BTV's finances would affect any discussion.

"I don't think Burlington is interested in giving up ownership," she said. "I say that because I believe at the moment the airport isn't a drain on its finances."

If that changed, she added, "Then maybe Burlington would say, 'Huh, maybe we should think about sharing this cost center with the rest of the region,'" Riehle said.

She asserted that airport aviation director Richards, a Weinberger appointee, has not worked well with South Burlington.

"His job with the community, the host city, has been really lacking," Riehle said. "I don't think he provides the kind of meaningful and sincere attention to, and recognition of, some of the community issues."

Richards defends his management. One could argue that the city has a proven track record of managing and growing the airport, while the state has never managed an air facility anywhere near as large or complex, he said.

Change would present many unknowns, Richards continued: "It would be taking an asset that Burlington has invested in for a hundred years and just turning it over to somebody, not knowing where we're going."

What's the state's position? Gov. Scott isn't pushing for a state takeover of the airport, at least right now. The governor "feels the City of Burlington is doing an incredible job managing the airport, and the city has made no indication it's interested in selling the asset," according to his communications director, Rebecca Kelley.

And, for now, it's not clear whether the South Burlington council resolution will be passed. "The state doesn't own it," said Rouelle about the airport. "It's not really our place to get involved unless asked."