Age of Asparagus: Planting for the Future as a Link to the Past | Food + Drink Features | Seven Days | Vermont's Independent Voice

Age of Asparagus: Planting for the Future as a Link to the Past 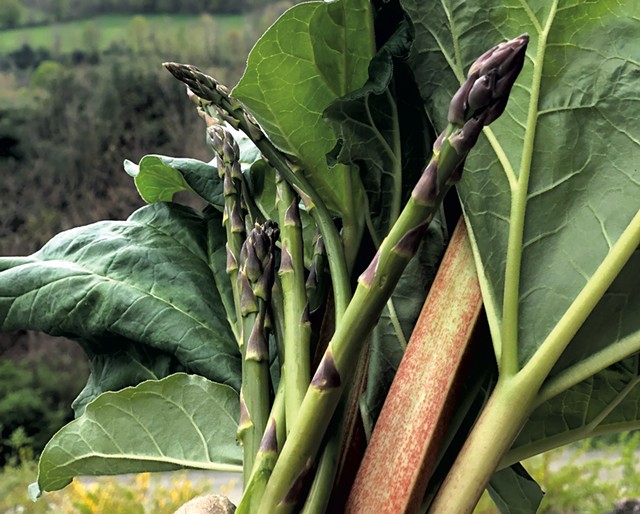 When I was growing up, asparagus meant one thing: must be May.

Once the tender green shoots started popping through the soil, they were on the plate at every meal for a month — roasted, grilled, sautéed, chopped into a casserole, shaved in a salad, pickled or puréed.

My late parents were both teachers, and they spent their summers playing in the dirt. On May 27, 1990, they started the growing season — and the following 30 growing seasons — by planting an asparagus patch in an out-of-the-way corner of their extensive vegetable garden.

I was only 3 years old at the time, but I'm sure of the date. My dad kept detailed garden "lab notebooks" that tracked the variables of weather, pests, seed orders, successes and failures from his annual garden experiments on our southern Vermont hillside.

On the precise, intricately labeled drawing of the 1990 garden, he crossed out "tomatoes," "peppers" and "decorative gourds" and added "asparagus 5/27, 25 crowns." He wrote it in pencil, but it was the most permanent thing on the page. Asparagus are perennial, and they don't like to be moved.

In the patch's third season — the first year it was fully harvestable, since the plants take several years to establish — he started to note when the earliest spears appeared: May 4 in 1992, May 1 in 1993, April 29 in 1994 with a note that the first meal on May 7 was "AWESOME!!!"

He wasn't always so effusive. "Poor" was his way of noting failure — usually of onions and broccoli — along with "chipmunks enjoyed." He had a soft spot for asparagus and its early spring reliability.

The old patch was a jungle of ferns when my brother and I sold the house in late summer of 2020. On my last stroll through the garden gate, the wispy leaves reached over my head and tickled my bare arm, like they had for 30 summers.

As I set out to plant my own patch this spring, I realized how much work had gone into that 1990 project. I'd ordered 50 asparagus crowns from Fedco Trees in Clinton, Maine, back in January. It's an excessive amount, but I envisioned that as they grew tall and feathery, they'd form a long, skinny row along the back fence.

When they arrived in late April, the crowns looked more like washed-up sea creatures than future vegetables. A few days later, I hired someone with a tractor to dig an 18-inch-deep trench in the heavy Vergennes clay.

I spent the next several days hauling wheelbarrows full of compost and fresh topsoil across the yard to backfill the 60-foot ditch. By the time I thumped the 10th load in, I was questioning whether I even liked asparagus and reminding myself of the long game.

After a wine-fueled planting session with friends — laying out the crowns nose-to-tail — they were in the ground.

Ten days later, I noticed the first spears poking up. It will be at least two years before I can harvest a meal, but I already know what I'll write in my own garden lab notebook.