Against the Odds, a Burlington Housing Development Will Remain Affordable — Forever 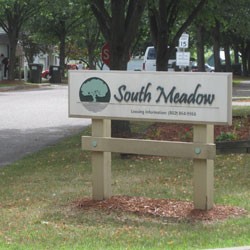 The fate of two low-income housing projects in Burlington hung in the balance last year when Pizzagalli Properties announced plans to sell the Wharf Lane and Bobbin Mill apartment buildings to the highest bidder. Almost 100 renters faced eviction until the Burlington Housing Authority swooped in with a deal that keeps the apartments subsidized for the indefinite future.

There’s no such cliffhanger at South Meadow, a 148-unit mixed-income development off Pine Street between Home Avenue and Queen City Park Road in the city’s South End. Under a financing deal struck with the Champlain Housing Trust that is expected to be formally concluded next month, the development’s cheaper units will remain affordable permanently, and some market-rate units will convert to affordable apartments and condos. Bottom line: The total number of affordable units will grow from 40 to 88.

Like Wharf Lane and the Bobbin Mill, South Meadow was built in the 1980s with federal funds that required that a certain number of housing units rent for below-market rate for a specified period of time: 30 years for the first two developments; for South Meadow, opened in 1987, it was 25 years.

“Many of my peers in real estate called me, asking if I wanted to sell the property,” says Rich Feeley, managing partner of the entity that built and owns South Meadow. “But Champlain Housing Trust seemed to me to be the natural buyers, and in a friendly way they were very persistent.”

The Champlain Housing Trust has assembled a $14.4 million financing package to acquire South Meadow. That will allow Feeley to repay the full $4.7 million in principal and interest on a loan from the city, which was making use of the federal housing development grant that helped build South Meadow.

Since those funds can only be used for affordable housing, the city has in turn agreed to reinvest the money in the project, helping the trust increase the number of affordable apartments from 40 to 64. Another 32 units presently rented at market rates will be gradually converted into owner-occupied condos, 24 of which will be made affordable for low- and moderate-income buyers.

“At a time of declining federal assistance for housing, it was very important to preserve South Meadow,” says Brian Pine, the housing specialist for the city’s Community and Economic Development Office.

Champlain Housing Trust director Brenda Torpy adds, “This is a significant-sized development that would be almost impossible to replace now.”

News of the deal comes as a relief to Alison Marsh, a South Meadow resident who pays $1000 a month for a two-bedroom apartment. That’s substantially less than what she paid to rent an inferior unit in Colchester, she says, where she lived until last year. “We really like living here,” Marsh says. “It’s pretty quiet and it’s well maintained.”

Writer and Champlain College professor Tim Brookes noted, “I have a two-bedroom townhouse for less than many two-bedroom apartments I looked at.” He moved to South Meadow on August 1.

Pine and Torpy credit Mayor Miro Weinberger for helping to make the deal happen, saying his background as a developer of affordable housing enabled him to quickly gauge the stakes and the financing mechanisms.

Feeley gets praise as well. “He’s a different kind of developer,” Pine says. Feeley made accommodations for disabled tenants at South Meadow that were exceptional for the period in which the project was built. “I kind of know what it’s like to depend on a place being accessible,” Feeley says. He lost his left leg below the knee as a result of an injury he sustained during a University of Vermont rugby match in 1970.

As is the case in low-income housing units, many South Meadow residents are also disabled.

The South Meadow project wasn’t always such a feel-good story. Many neighbors opposed the development when it was brought forth in the mid-’80s. George Thabault, then a city councilor, recalls being one of only two South Meadow supporters at a meeting that brought out 200 local residents.

Thabault, who lived in South Meadow with his family in the 1990s, says the development was designed to prevent the “stigma” of living in subsidized housing by making all the apartments — market-rate ones and affordable units — look the same from the outside. Children from South Meadow attend the same schools as kids on nearby streets and use the same neighborhood playground.

“It’s proved to be a successful project,” says Thabault.