After Two-Year Renovation, the Hood Museum Reopens Its Doors 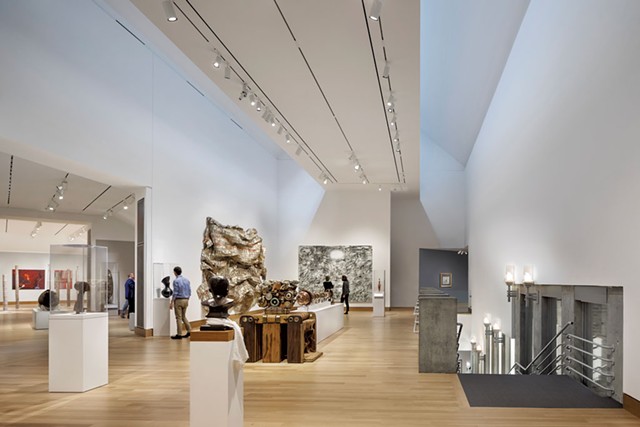 Dartmouth College has been acquiring art and artifacts since shortly after its founding 250 years ago. Today, those objects number more than 65,000. Gathered at the school's Hood Museum of Art, they comprise one of the premier academic collections in the country.

Such a collection deserves a building of commensurate importance, yet the college waited until 1985 to build its first dedicated museum — a quirky red-brick, copper-roofed assemblage of 10 gallery spaces designed by postmodern architect Charles Moore.

Once established, the Hood pioneered the idea of a teaching museum, hiring its first academic curator in 1991. The museum began moving objects into an intimate viewing space so that classes — which now include groups of college students from 18 disciplines as well as the local K-12 set — could examine and discuss them up close.

When Moore designed the Hood, real estate fronting the college green was limited to a narrow, recessed spot, so visitors could access the galleries only by passing through a gateway and negotiating a courtyard. The location was no less problematic in 2012, when Dartmouth engaged the New York firm Tod Williams Billie Tsien Architects (TWBTA) to renovate, change and expand Moore's building.

At last, the public can see the results: The museum reopened last weekend after a two-year building period. According to an ecstatic John Stomberg — who replaced Michael Taylor as museum director in January 2016, well into the design process — the $50 million project, entirely funded by philanthropists, does everything the college requested.

The Hood now welcomes visitors from the green with an unmistakable façade and backlit signage. The renovation has also expanded teaching capacities with three large classrooms in a new object-study wing, added significant gallery and administrative space, and preserved much of the Moore original.

During a media tour last Friday, the building struck this reporter as a beautiful place to see art. It's a masterful interior expansion and renovation project whose exterior is limited by a still-cramped site and the challenge of accommodating an existing building by an iconic architect. Moore's Hood was considered one of a handful of signature examples of his playfully historicizing, stage-set-like approach to architecture. Others include his Piazza d'Italia in New Orleans, the Sea Ranch Condominium complex near San Francisco and the house he designed for himself in New Haven, Conn.

TWBTA seems to be the go-to firm for difficult situations. Its work includes the design of the new Barnes Foundation in Philadelphia, where the firm was required to preserve the entire interior room sequence and art arrangement of the original building. That restraint was "freeing," Tsien commented during an opening-weekend onstage chat between Stomberg and the architect couple.

The Hood project may have been less so. It required intervening in a design by Tsien's mentor: Moore was her thesis adviser at the University of California, Los Angeles.

First, the architects had to address the site: a swath of land between two buildings that, before the Moore Hood, formed a disconnected L around a corner of the green. The two arms of the L are the red-brick, turreted Romanesque Wilson Hall (1885) and the Hopkins Center for the Arts (1962). The latter building, by Wallace K. Harrison, looks like a dry run for his 1966 Metropolitan Opera House at Lincoln Center.

Moore solved the site problem by creating what Middlebury College architecture professor emeritus Glenn Andres called "a memorable sequence of spaces": a covered gateway that spanned the two buildings, punched through by a concrete-columned entry arch, followed by a courtyard that offered a curving ramp that hugged the building and a path that swept through a passageway beneath a cupola-topped tower. Both paths led to Hood entrances that one might not spot until one reached them.

The original museum, said Andres, was "a dramatic, amazing, sequential process of moving through spaces and being manipulated by the architecture. Then, all of a sudden, you were into the museum. If you closed your eyes, you couldn't visualize what the building was. It was more of an experience."

But those who worked in the old Hood, including current deputy director Juliette Bianco, saw the entry sequence differently: as something that stymied public engagement.

Bianco graduated from Dartmouth in 1994 and began working at the Hood two years later. "The archway served more as a barrier than anything. 'Where is the museum?' was the question we got more than any other," she recalled. The obscured entries were "very clever and fun but not the kind of work you want someone to do to get into a museum."

Williams and Tsien's building eliminates that need. Facing the green now is a horizontally oriented façade in light-gray brick; its main mass, a two-story box, hovers over a recessed entry. The right end of this box, defined by a single large square window, projects toward the Hop beyond the footprint of the building. It thus impinges on a view of Moore's cupola-topped tower beyond. Though the façade is impressive, its visual effect from the front is to make the wedge-like site appear even more cramped.

TWBTA replaced Moore's multidirectional courtyard with a light-filled atrium just inside the entrance. Outside, passersby proceed along a long, undifferentiated wall (with its own single window) under Moore's tower. After passing through, a pedestrian can turn around and see the entire south façade of the original building, which here completely hides the new construction.

Back at the Hood's main entrance, flanked by banister-free steps leading down from each of the adjacent buildings, one enters a soaring and appealingly non-orthogonal space that isn't obviously about art. The atrium is a flexible gathering place that preserves part of the exterior of Moore's building. (According to Stomberg, 45 percent of the budget went toward preservation and renovation.) The far end leads directly to the Hop's café, open to visitors as well as the campus community.

One wall leading that way is dominated by a striking, two-story-tall felt wall panel that Tsien and Williams described as a collage of images representing items in the museum: a Hokusai print, a modern vase and circular glass slides from the scientific-instruments collection.

Just off the atrium entrance are the coatroom and object-study center that were missing in Moore's design. (Students used to pile up their backpacks at the guard's desk before trekking to a teaching room carved from a storage area.) The three classrooms' towering doors can accommodate the Hood's largest holding — a 20-by-18-foot work by Ghanaian artist El Anatsui — and the lack of thresholds makes it easy to roll works in, said associate curator of academic programming Amelia Kahl.

Glass doors on the atrium's side serve as the new public entrance to the museum itself. From there, the sequence of galleries continues along the original layout to the old courtyard entrance (now a windowless gallery), up the signature Moore staircase lined with medieval-looking torchières ("sacred ground for architects," commented Williams during the tour) to the upstairs galleries.

The latter include Moore's enormous Lathrop Gallery — minus its catwalk — and his square gallery beneath the cupola. A sequence of TWBTA-designed galleries extends toward the green from the original rooms, which were completely renovated to contain new HVAC and technology systems.

The new galleries, orthogonal white boxes and freestanding walls in the international contemporary art-museum mode, vary track lighting with natural light from two statement windows. One is the projecting façade's window, with its expansive view of the green; the other, a square window placed high in the corner of the final and largest new gallery.

Unlike Moore's building, it must be said, the addition accommodates art without attempting to become a work of art itself.

In Stomberg's opening-weekend chat with the architect couple, Williams mentioned the firm's 1997 design for the American Folk Art Museum in New York City — a building lauded by the architectural world that the Museum of Modern Art purchased and tore down in 2014. Its fate, he humbly suggested, may have been tied to the fact that the design was "more architecture than the art could handle." (He did not address the irony, observed by many, that the destruction was contemporaneous with the couple's intervention in Moore's building.)

Attending the Hood opening last week, Vermont state architectural historian Devin Colman opined that the new building seemed deliberately restrained. "Any Charles Moore building is an object in and of itself; this one was almost a part of the collection," he said. "[TWBTA] can't compete with that. Their addition is very quiet, whereas, when you're in the Moore space, you're aware of it. It's a study in contrasts."

Colman said he regretted the elimination of Moore's "meandering and lively façade" and would have preferred a freestanding addition linked to a restored but intact Moore building.

Andres said he is saddened by the project's "damage to an important icon of American postmodernism" and suggested another site should have been found altogether.

But neither of those alternatives was an option for TWBTA. The architects tackled an impossible site and a daunting request to intervene in a historic structure. They came up with a building that is, most memorably, a setting for an amazing array of art and cultural objects from around the world.

When Roger Campbell reviewed Moore's building in the January 1986 issue of Architecture, the journal of the American Institute of Architects, he wrote: "The Hood's interior, not its exterior, is where the big architectural successes are scored." That may be the new Hood's lasting value, too.