After the Flood? Lots of Carp, Construction and Mosquitoes 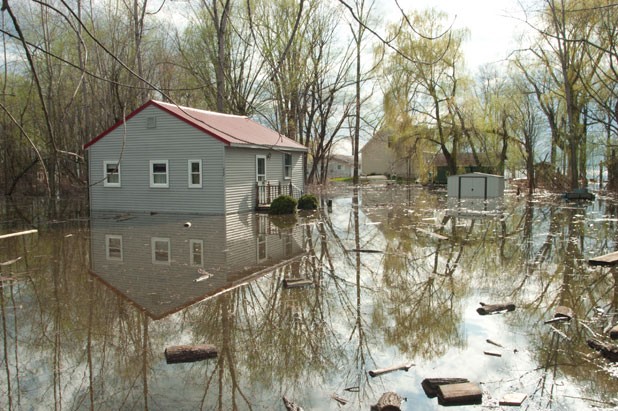 Lake Champlain’s historic flooding is having broad, varied but still-undetermined effects on many Vermonters who live, work or play on or near the sixth-largest body of freshwater in the United States.

And, as with any disaster, there will be at least a few winners along with many losers as a result of the lake’s dramatic enlargement. The flooding is likely to boost a couple of segments of the state’s economy, just as it will benefit a few kinds of plants, animals and insects.

Here’s a rundown of some of the expected outcomes:

FISH — A bigger lake provides expanded habitats for fish, with populations of carp and pike in particular likely to swell this spring, says Mike Winslow, staff scientist for the Lake Champlain Committee. “We’ve seen pictures of carp spawning on what used to be someone’s lawn,” Winslow reports.

The recent alewife die-off around St. Albans and the Lake Champlain Islands had to do with the lake’s temperature — cold! — not the flooding, he says. How quickly the water warms has more to do with “solar influx” than water volume, Winslow adds.

What humans perceive as an extreme event is probably no big deal — evolutionarily speaking — for Lake Champlain’s denizens, scientists suggest. “Fish are pretty well adapted to high-flow events,” says Eric Palmer, director of fisheries for the state’s Fish & Wildlife Department. “I wouldn’t expect a dramatic impact from this kind of flow.”

POLLUTION — “A huge phosphorus load” has been flushed into the lake along with the tons of soil to which the chemical fertilizer is bound, Palmer says. But wider blooms of algae are not necessarily more likely as a result, cautions Eric Smeltzer, a scientist with the Department of Environmental Conservation. In past years, algae eruptions in sheltered sections of the lake, such as Missisquoi Bay, have killed fish and even dogs and rendered the water hazardous for swimmers and boaters.

“A lot of the phosphorus will be sedimented to the bottom of the lake or washed out through the Richelieu River,” Smeltzer notes. The extent of algae blooms will be determined mainly by factors other than the current flood — particularly by weather patterns this summer, he adds.

SEWAGE — Burlington came within inches of experiencing a sewage backup of a sort never seen — or smelled — before, reveals Steve Goodkind, the city’s public works director.

“If the water had gone three or four inches higher,” he says, the sewage-treatment plant “would not have been hydraulically able to handle it. The sewage would have backed up into the plant. Where it would have gone isn’t entirely clear.”

BUGS — It’s going to take a lot of bug spray to shoo the quantity of mosquitoes expected to hatch this spring. Maybe blackflies, too, suggests Michael Sabourin, president of the Vermont Entomological Society. Mosquitoes thrive in standing water, of which there will be plenty as the lake recedes. Blackflies are attracted to fast-moving water. There’s plenty of that, too, due to massive snowmelt and incessant rains, Sabourin observes.

The populations of some types of nonobnoxious insects may decline in the coming months, he adds. That’s because high water has submerged plants they rely on for sustenance.

URBAN FARMING — Many of the dozen or so farms in Burlington’s Intervale are at least a couple of weeks behind schedule due to the Winooski River’s inability to empty into the swollen lake, says Travis Marcotte, director of the nonprofit Intervale Center. No infrastructure has been damaged there, however, and the center was able to harvest trees from its nursery — via canoe, Marcotte reports.

Adam’s Berry Farm has suffered more from the inundation than have the Intervale’s other ag operations. That’s because his plants are perennials and cannot be resown for harvesting this year, explains berry man Adam Hausmann.

Hausmann figures he could lose as much as 30 percent of his annual income as a result of the damage done to his strawberry and raspberry bushes. They’ve been flooded on four occasions in the past eight months, he notes.

Hausmann and some other Intervale farmers have been “having discussions about the fact that we do farm on a flood plain,” he reports. Some of his fellow farmers plan to plant different crops this spring and to leave some pieces of land uncultivated, he says.

ENERGY — All this water should be good for hydropower, right? Wrong, says Dottie Schnure, spokeswoman for Green Mountain Power.

Along with the exceptionally high flow on the state’s rivers has come an inordinate amount of debris, Schnure notes, causing GMP’s eight hydro plants to be shut down periodically. They generate as much as 8 percent of the power the utility sends to its customers — and at a lower cost than any of GMP’s other sources, Schnure says.

With rivers now flowing clear, all the hydro turbines are running normally, she adds.

Where will the driftwood go? Bill Kropelin, chief forester at the McNeil Generating Station in Burlington, says he anticipates the waste-wood depot there will eventually receive large quantities washed ashore by the flooding. It will come mainly from Chittenden County’s local public works departments, although “John Q. Citizen is also able to bring it in.” Kropelin cautions that the wood has to be untreated and unpainted; “the remains of someone’s deck will not be accepted.”

RECREATION — The flood has washed away beaches, trees and some structures along Burlington’s shoreline, says Parks and Recreation Department chief Mari Steinbach.

North Beach remains closed more than two weeks after its scheduled May 1 opening date, she notes. The bathhouse is partly submerged, and the boardwalk and seawall have been destroyed. Damage is extensive at Leddy and Blanchard beaches as well, Steinbach adds.

As much as one-quarter of the Burlington lakefront bike path’s 7.5-mile length may have been at least partly eroded, she calculates. The Lake Champlain causeway, which connects Burlington with Grand Isle via a summertime bike ferry, has been washed away in several sections, says Local Motion membership coordinator Adele Dienno. The ferry’s long-term future is uncertain, she says.

Waterfront Park, built on landfill, is saturated from the high water table and heavy rainfall, Steinbach says. The Community Boathouse listed as the lake rose, leading Vermont Gas Systems to close its connection there, but the 23-year-old structure appears stable, Steinbach says, noting that divers will soon inspect its mooring.

The Community Sailing Center had to vacate its premises alongside the sturdy, if ugly, Moran Plant, which does not seem to have sustained damage, Steinbach adds.

CONSTRUCTION — If anyone stands to benefit from the recent deluge, it’s builders. “A lot of contractors will be put to work,” suggests Joe Sinagra, director of the Home Builders and Remodelers Association of Northern Vermont.

Sinagra thinks Gov. Peter Shumlin’s estimate of some 600 homes destroyed or damaged by the lake’s rise is probably “a low-end figure,” noting that it will cost about $3000 to dry the basement of his own home in St. Albans. “I bet there are dozens, if not hundreds, of homes like mine that aren’t included in the governor’s estimate,” Sinagra says.

Smeltzer, the state environmental scientist, expresses hope that those with damaged retaining walls will rebuild with rocks, vegetation and environmentally benign materials rather than concrete. The historic high water may further inspire some homeowners to undertake preventive work, Sinagra adds.

“You’ve got to call in a professional to deal with mold and mildew,” he declares, “because it can be deadly.”

TRANSPORTATION — Ferry service to and from Charlotte remains suspended because the dock in Essex, N.Y., is underwater, says Heather Stewart, operations manager for Lake Champlain Transportation.

When will trips resume? “Tell me how much sunshine we’ll get,” Stewart replies, “and I’ll give you an answer.” The big boats currently pyling the waters of Lake Champlain are the Spirit of Ethan Allen III and the Northern Lights, two privately operated cruise vessels.

Flooded parts of the company’s Perkins Pier operation require employees to wade around in hip boots, Stewart says. Breakwater Cafe & Grill is submerged, but the optimistic operations chief assures that “it’s all fixable.” Sometime in the coming weeks, Stewart predicts, “people will be sipping margaritas there.”

What’s it going to cost to fix? “We’ve not even started to make an estimate,” she says.

Stewart’s take on the flood might serve as wise advice for others, close by and far from Lake Champlain: “We try to work with Mother Nature,” she says. “You’re not going to beat her. You’re certainly not going to fool her.”