After Sandy Hook, Gun Control May Finally Have a Shot in Vermont 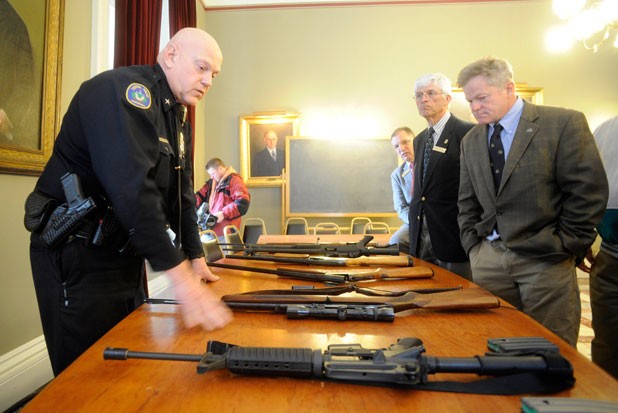 Old and new Vermont coexist in relative harmony as a result of many shared values: conservation, for one. There’s trouble between them now, however, as rural traditions clash with cosmopolitan sensibilities on the issue of gun control.

The conflict — which is as much cultural as geographic — is evident in the recent decision by a Morristown shooting range to ban members of the Burlington Police Department from conducting target practice there. The Lamoille Valley Fish and Game Club barred Queen City cops in retaliation for the Burlington city council’s move to ban assault rifles and high-capacity magazines within city limits.

In a written statement last month, the Burlington PD called it “unfortunate” that a “much-needed community dialogue regarding gun control” has resulted in the loss of one of its principal training grounds. Police Chief Michael Schirling declined last week to elaborate on that delicately worded response, other than to emphasize that his department has taken no position on the proposed assault-weapons ban.

Ed Wilson, a 40-year member of the Lamoille Valley group, defended the ostracism in an interview at the outdoor firing range, which was quiet last Saturday at 8 a.m. “It’s not as though they have no other places to shoot,” Wilson said, adding, “We felt we had to make a stand.”

Wilson said a majority of the 400 families who make up the club’s membership probably think Burlington deserves to be slapped for considering action that would infringe on gun owners’ rights. “It would be so ironic for our members to be shooting here and to watch the Burlington police roll in with … weapons they can bring to our town but we can’t bring to theirs,” he said.

Burlington City Councilor Norm Blais (D-Ward 6) isn’t apologizing for the assault-weapons ban he sponsored, which has the support of Democratic Mayor Miro Weinberger. “I’m embarrassed to say it took the tragedy in Newtown to lead me to do this, but we’ve just been lucky that nothing like that has happened here,” Blais says. “We do need to take the basic step of prohibiting the kind of rifles and high-capacity magazines that have nothing to do with hunting.” The council’s 10-3 vote to advance the proposed ban implies that most of Burlington agrees with Blais.

The rest of Vermont? Not necessarily.

Gun-rights advocates scored a Statehouse victory last month, when Sen. Phil Baruth (D-Chittenden) withdrew a bill banning assault weapons in the face of organized opposition. Now they’re targeting a bill sponsored by Rep. Linda Waite-Simpson (D-Essex Junction). Gun Owners of Vermont, a group that holds monthly meetings at the Rutland American Legion, has declared that it is “committed to a no-compromise position on firearms ownership rights.”

Waite-Simpson’s bill, H.124, is broader than Baruth’s bill but does not ban assault weapons. The legislation would, however, tighten Vermont’s famously lax gun laws in several significant ways by prohibiting possession of high-capacity ammunition clips; requiring background checks for anyone buying a firearm at a gun show; barring felons from owning guns; instituting a mandatory safety course as a condition for carrying a concealed firearm; requiring the state to report people with acute mental illnesses to the national gun-purchase background-check system; and repealing a ban on sale or use of gun silencers.

Waite-Simpson says gun violence in her own community is what motivated her to propose the legislation. She’s referring to two gun deaths in 2006 that resulted from a murderous rampage at Essex Elementary School and the 2009 suicide of 15-year-old Aaron Xue, who was a classmate of one of Waite-Simpson’s daughters.

“This is here. This is real,” she declared at a Statehouse news conference last week.

One of the bill’s co-sponsors, Rep. Adam Greshin (I-Warren), admitted that Vermont ranks as one of the safest states. “But we live in a larger society,” he added. Winooski Police Chief Steve McQueen told assembled reporters that “large numbers of individuals are coming into Vermont to purchase firearms to protect their turf” in drug wars. And state Rep. Mike Yantachka (D-Charlotte) observed, “Firearm regulations from one state to another look like Swiss cheese, and Vermont happens to be one of the holes.”

The Lamoille Valley club’s Wilson, who is a registered gun dealer, rejects such arguments and the legislation they have spawned. Like many gun-rights advocates, Wilson takes an absolutist position on the Second Amendment of the U.S. Constitution, as well as Article 16 of the Vermont Constitution, which declares in part: “The people have the right to bear arms for the defense of themselves and the state.”

He says these rights are “God-given” and cannot be abridged by the state or any town. Wilson declares gun rights to be “the most important rights because what good are the other rights if you’re dead or enslaved?”

Greshin is familiar with that line of reasoning. Referring to Article 16, the state rep insists that “nothing in our bill threatens this right.” And he adds that “even our most sacred rights do come with some limitations,” such as the exclusion of libelous speech from First Amendment protections.

During a later interview, Waite-Simpson waived a wad of identically worded messages she’s received from opponents of her bill, saying, “This is about as helpful as Nancy Reagan telling us to ‘just say no to drugs.’” Echoing that, Essex resident Ge Wu — mother of Aaron Xue — says gun-rights groups won’t even discuss rules related to the safe storage of weapons. Her son took his own life using a weapon that did not belong to anyone in his family and was not properly secured.

“The pro-gun people aren’t even willing to support the education part,” Wu says.

But those pro-gun people may now be outnumbered as the state’s population — and its politics — changes. An articulate defender of the pro-gun position, Wilson regards the Waite-Simpson bill as a serious threat and an illustration of a multifaceted culture clash in Vermont. “I haven’t had to worry about it with guns,” he adds, “until now.”

Greshin agrees that the gun-control debate reflects a divergence of values as the state’s population becomes more metropolitan and diverse. “Vermont is no longer the rural state that everyone thinks it is,” Gershin observes, pointing out that about one-third of the population lives in Chittenden County.

The old Vermont of hunters and target-shooters may be slowly vanishing. According to the Department of Fish & Wildlife, Vermont issued 91,039 hunting licenses to state residents in 1987 — about 25,000 more than were issued in 2011.

Councilor Blais speculates that supporters of gun control now constitute “a silent majority” in the state, suggesting that the Vermont wing of the NRA “is something of a paper tiger.” But Blais says he’s puzzled by the absence of an organized gun-control movement. In other left-leaning states, high-profile liberal politicians have led that charge.

While he doesn’t support President Obama’s call for a ban on assault weapons and high-capacity magazines, Leahy is sticking his neck out farther than ever before, sponsoring a bill to punish “straw purchasing” — when someone buys a gun for someone who is prohibited from acquiring one himself — and to crack down on gun trafficking.

Back in Montpelier, pro-gun-control lawmakers are demonstrating the savvy they will need to get their bills passed. Uniformed police officials stood shoulder-to-shoulder with eight House lawmakers at last week’s press conference. Afterward, Waite-Simpson organized a firearm show-and-tell, during which Capitol Police Chief Les Dimick laid out seven unloaded rifles from his personal collection, including a semi automatic Colt AR-15.

Waite-Simpson said she wanted to give her gun-shy colleagues a chance to become acquainted with firearms. The Essex lawmaker certainly is. She says she has no issue with guns and, to prove it, notes she owns two firearms — a revolver and a hunting rifle — which she occasionally takes to a Richmond range for shooting practice. Her daughters, ages 18 and 20, have also learned to shoot.

But Wilson is not convinced. He tells a story that’s similar to Waite-Simpson’s: He learned to shoot at age 8 in a range his father built in the cellar of the family’s home near Elmira, N.Y., and passed on shooting skills to his own children, now ages 38 and 40, who in turn are teaching his grandkids.

But Wilson comes to a different conclusion: To him and many others, guns are a fundamental right that must be defended against any restrictions. “This goes back a long way,” Wilson declares. “It’s a strong tradition that has to live on.”