After Rutland Voted to Replace Its School Mascot Last Year, Defenders Dug In 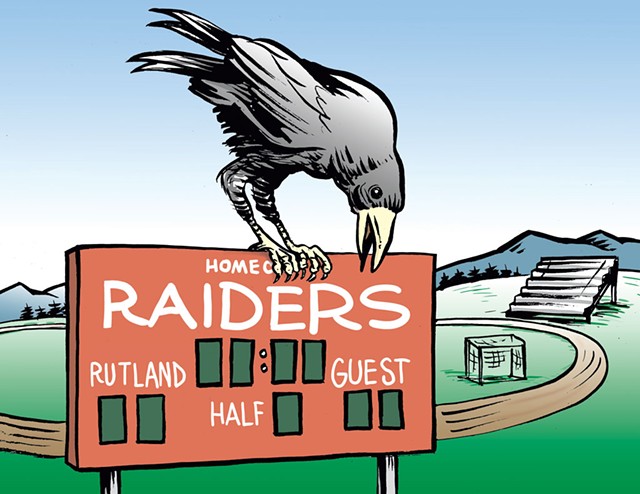 It's been 11 months since the Rutland City Board of School Commissioners voted 6-4 to retire the district's Raiders mascot after students and alumni made the case that it perpetuated racist stereotypes of Native Americans. And it's been seven months since the school board approved a new student-selected moniker — the Rutland Ravens.

But last week, there was no sign of the large ebony bird anywhere in the city.

At Rutland High School, a towering scoreboard welcomed visitors to Alumni Field, "home of the Rutland Raiders." A few miles away, at Dollar General on North Main Street, a cardboard kiosk was filled with messy piles of Rutland Raiders T-shirts and sweats. During the noon rush at the Sandwich Shoppe on Merchants Row, a high school athlete in a Raiders lacrosse shirt with an arrowhead symbol picked up lunch.

The successful campaign to get rid of the Raiders name, and the subsequent backlash it sparked in the sports-focused community, started a debate that's dragged on for close to a year.

The current school board — now with a majority who believe that the Raiders mascot is a tradition worth preserving — has maneuvered to stall the Ravens name from being codified. As the debate continues, Ravens supporters, who say the change reflects Rutland's commitment to being respectful and inclusive, contend that school administrators need to show stronger leadership to resolve the situation.

This year's Town Meeting Day results complicated the situation. Three pro-Raiders candidates — one incumbent and two challengers — won seats, tipping the balance of the 11-member school board to a majority of pro-Raiders.

"I think that it's important to ... look at what's right rather than what's popular." Jenna Montgomery tweet this

In May, newly appointed board chair Hurley Cavacas appointed four board members to serve on an ad hoc committee to determine whether the previous board followed proper procedures when it voted to retire the Raiders name. Cavacas, who had voted against changing the mascot last November, said in a recent interview that he still believes that the Raiders name should be retained, but he is willing to listen to people on both sides.

"In my mind, I believe that a raider is a warrior" and not just affiliated with Native Americans, he said.

Stephanie Stoodley, a new school board member and one of the most ardent Raiders defenders, did not respond to multiple requests for comment but explained at a February school board candidate forum why she is also in favor of keeping the old mascot.

"If we erase history, we will have nothing to learn," fellow pro-Raiders board member Tricia O'Connor said at that forum. "We really need to focus on taking stuff and learning from it, not eliminating it."

On September 2, Burlington attorney Christopher Leopold, who had been hired by the school board to review the mascot decision, presented his findings to the committee. He characterized the board's decision as "valid" and "a binding action," and he recommended that board members undergo training in school board governance. The committee accepted Leopold's findings.

But that doesn't mean the case is closed, Cavacas said. Members of the ad hoc committee will present their views about the attorney's findings to the rest of the board on September 28. Cavacas said it remains to be seen what action the board will take, and some members might call for a reinstatement of the Raiders mascot.

If that were to happen, Rutland would be rejecting a chorus of local and national voices that oppose using Native American names and imagery as mascots.

The National Football League's Washington Redskins became the Washington Football Team last year, with plans to choose a new name in the future.

Maine and Colorado have banned Native American mascots at public schools. In August 2020, the Vermont Principals' Association issued a statement saying that "any mascot ... that has marginalizing, racist or exclusionary elements should be replaced." In March, the Danville School Board voted 4-1 to retire its Indians mascot. The high school is still choosing a new one, but the Indians moniker is no longer used, athletic director Randy Rathburn said.

In May, the National Congress of American Indians wrote to Rutland school officials reiterating its support for retiring the Raiders mascot.

In an interview, Olsen said he's had conversations with individual school board members about the mascot but believes that the decision is up to the board. He noted that mascot debates in Vermont and elsewhere are often long and contentious.

Schillinger said he respects the "deliberate" process the school board is taking to make sure all members of the community are being heard.

But high school student Montgomery — who said she started advocating for the name change last summer as a concrete way to stand up for social justice — said an impartial, cautious approach is not the right one.

"Quite frankly, I don't care how many people ... don't support changing the mascot. I don't think that overrides actual marginalized people saying that this negatively effects them," Montgomery said. "I think that it's important to center the correct voices and look at what's right, rather than what's popular."

Others said the superintendent and principal should show more leadership by supporting the Ravens mascot and replacing the old team name with the new one on signs and uniforms.

Giovanni Falco, who graduated from the high school last spring after serving as senior class president, served on the student committee that chose the new mascot. He said Olsen and Schillinger should "stop hiding behind the school board." If the top administrators threw their weight behind the Ravens, the drama would dissipate, he said.

"The administrators are focusing on their careers ... because the school board is their boss in the end," Falco said. "But a decision has been made."

Last spring, Falco said, Schillinger removed a table Falco had set up in the high school lobby to display potential designs for the new Ravens mascot. Junior Emilia Sabataso, who served on the mascot committee, said Schillinger also rebuffed an offer from a graphic design teacher to have students create potential logos.

"Not having a logo, I feel like, is hindering the actual change," she said.

Rutland alderman Thomas Franco said the school administrators' approach is "really misaligned with their goals of being inclusive as a district and truly trying to drive this element of equity in our schools."

School board member Alison Notte shares that sentiment. The former board chair said that if the administration had stepped in last winter and voiced its unequivocal support for the Ravens mascot, the community likely would have moved on by now. After the first home football game of the season, she and others complained because the announcer identified the Rutland team as the Raiders.

"Throughout the game the fans were roaring with loud chants: Raiders, Go Raiders," reported the Lakeside News & the Rutland Sun, a local weekly paper, under the headline "Some fans won't let Raiders go."

Facebook has amplified the divide. The 148 members of an open group called Positive Change Rutland share posts about where to get Ravens bumper stickers and articles about other communities that replaced their mascots. Meanwhile, on I Am a Rutland Raider, a closed group with more than 1,600 members, people profess their allegiance to that mascot. "There are NO Ravens! Raiders forever!" one comment reads. Members revel in disparaging the new mascot. The group also shares posts that take aim at critical race theory and anti-racist education.

South Burlington High School principal Patrick Burke experienced a similar controversy. In February 2017, the SoBu school board voted unanimously to remove the Rebels mascot because of its ties to Confederate imagery, a move that Burke publicly supported. That resulted in backlash led by members of a Facebook group called the Rebel Alliance.

In the ensuing months, the school budget was defeated twice, the athletic field was defaced with racist graffiti, and Rebels supporters sued the district. In 2018, the Vermont Supreme Court rejected their legal bid for South Burlington to put the mascot decision to a citywide referendum.

"It was very hard," Burke said. He sought counsel from fellow principals in Vermont and around the country.

"Some of what they said to me was, 'You just gotta hang in there. It's actually gonna get better quicker than you think,'" said Burke. "And I remember thinking that was not true ... And here we are: My seniors are my first class to come in as SB Wolves, and it's the most unifying element of our school culture right now, period."

Burke said he sympathizes with Rutland students who are disappointed that change hasn't happened more quickly.

"I think that what they want is their school to be unified," Burke said.

That's what Emelia McCalla hopes for. The Rutland senior said the debate has distracted from more important issues the school board should be focused on, including the budget and curriculum.

"I don't think adults should feel like they can have so much sway over the concerns of students, especially stuff like this, where it's just picking something that represents everyone fairly — having a mascot that everyone can feel proud of and included by," she said.

"It's very disappointing to see adults conducting themselves in this manner, knowing that they're role models for younger people," she said. "I wouldn't want someone to see one of those school board meetings who was from outside of Rutland or outside of Vermont and think that is representative of the students at the high school, because I don't think that's true."

October 20, 2020: The Rutland City Board of School Commissioners votes 6-4 to retire the Raiders mascot.

February 9, 2021: Following a presentation by students, commissioners vote 6-4 to adopt the Ravens mascot.

March 2, 2021: On Town Meeting Day, three school board candidates who campaigned to bring back the Rutland Raiders win seats.

September 28, 2021: The school board may take action on the mascot.

The original print version of this article was headlined "Raiders vs. Ravens"