After Police Shootings, Vermont Cops Are Slow to Provide Statements 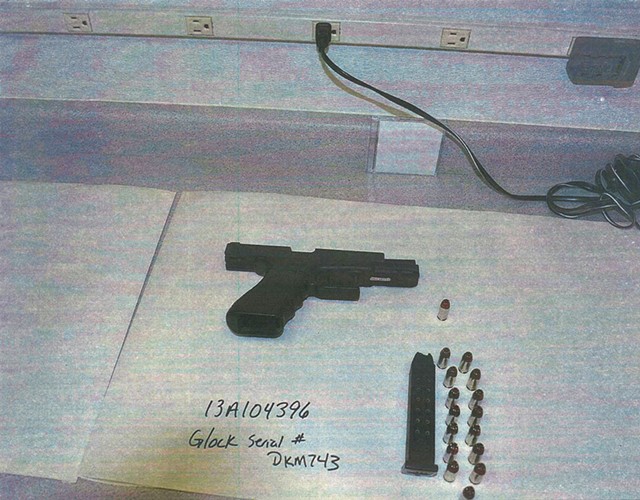 A fatal Burlington police shooting four years ago might have played out differently than initially reported, according to documents recently filed in federal court. In November 2013, Burlington police responded to a call regarding a mentally disturbed man, Wayne Brunette, in the city's New North End. During a brief encounter, then-officer Ethan Thibault fatally shot Brunette. The police corporal justified his actions by saying Brunette was brandishing a shovel when he charged Thibault and fellow officer Brent Navari.

But documents filed last month in a wrongful-death lawsuit brought by Brunette's family show that some eyewitnesses disputed basic facts of the police report: whether Brunette was charging Thibault, what he was doing with the shovel, and how far away he was from Thibault and Navari when the shots were fired.

Investigators at the time were quickly tasked with figuring out whether the shooting was lawful. Yet authorities waited six days to interview Thibault and two days to question Navari, giving them ample time to prepare for and meet with an attorney, the court records show.

That delay is not unusual. Unlike civilians, officers across America who pull the trigger are generally not interrogated right away.

The next year, a Windsor police officer opened fire on a drug suspect during a sting. Vermont State Police detectives didn't interview the officer, Ryan Palmer, until four days later. (Palmer was charged with felony aggravated assault and reckless endangerment but was acquitted after a trial last September.)

In response to police shootings across the country, criminal justice reform advocates are starting to question the practice of delaying interviews with the officers involved.

"Obviously, it provides an opportunity to square up one's recollection and testimony with a theory that would negate any criminal and civil liability," said Burlington attorney Robert Appel, a former Vermont defender general who has filed several lawsuits against police, including Nokes. "In any investigation, the sooner you interview, the fresher and more accurate your recollection will be. It's common sense. There's no possible explanation for that delay except to allow officers to put forward a narrative that conforms with no liability."

Campaign Zero, a national criminal justice reform effort associated with Black Lives Matter, has advocated for a series of reforms to police union contracts. Among them: removing provisions that protect officers from being questioned immediately in use-of-force cases.

No laws or statewide policies in Vermont govern when to interview law enforcement officers who have discharged their weapons in the line of duty. Individual departments decide.

Vermont State Police policy requires that troopers submit a written report within 24 hours of using lethal force and go on paid leave for at least three days. The policy provides no guidance on the timing of interviews.

The Burlington Police Department lacks rules for how criminal investigations of police shootings should be handled. But Burlington Police Officer Dave Clements, who served for years as head of the officers' union, said cops often find themselves in difficult positions. They are encouraged to submit to questioning, Clements said, even though they have the same right as citizens to invoke Fifth Amendment protections against self-incrimination.

Rick Gauthier, executive director of the Vermont Criminal Justice Training Council, which licenses cops and advises police departments, said his organization does not provide model policies or trainings in regard to police-shooting investigations, because the legislature has never requested it. Generally, Gauthier said, law enforcement agencies in Vermont and elsewhere have long believed in delaying interviews.

"There was a school of thought that said you'll get a better interview out of an officer if you wait a little while, in terms of the officer's recollection, because of traumatized memory," Gauthier said. Immediate questioning "was thought to be problematic."

The International Association of Chiefs of Police, an organization of police executives that develops model policies, encourages agencies to delay interviewing officers who use deadly force for a "few hours to several days."

"Whenever feasible, officers should have some recovery time before providing a full formal statement," its 2013 policy paper states. "An officer's memory will often benefit from at least one sleep cycle prior to being interviewed, leading to more coherent and accurate statements."

But some experts dispute that assertion. University of Nebraska Omaha criminologist Sam Walker said it's "not supported by scientific evidence."

In a 2015 report, Walker wrote, "Even if there were scientific evidence that trauma has a negative impact on memory, police unions and their advocates apply that evidence in an inconsistent, hypocritical and self-serving manner, denying the waiting period privilege to crime victims, criminal suspects, witnesses to crimes, accident participants and others whom the police routinely interview."

When Vermont civilians are involved in shootings, police seek to interview them immediately.

During a 2008 fracas on a softball field in Chester, Kyle Bolaski of Springfield fired a hunting rifle and killed Vincent Tamburello Jr. Within hours, police had recorded a lengthy interrogation with Bolaski. He claimed Tamburello had come at him with a wood-splitting maul and that the shooting was an act of self-defense.

That interview has become a key piece of evidence in a case that has dragged on for years. Bolaski, initially convicted, has now won a new trial expected to start later this year.

The Brunette family's suit is set for a preliminary hearing in U.S. District Court next month. The group is seeking unspecified damages for Brunette's death.

In November 2013, Brunette's mother called police to report that her son, who had long suffered from mental health problems, had chopped down a tree in their yard and was out of control. Dispatchers told officers Navari and Thibault that it was a "mental health" call and sent them off to the quiet New North End neighborhood.

The cops summoned Brunette outside. Holding a long-handled spade, he approached Navari and, eventually, Thibault and ignored commands to drop the shovel, according to the officers.

"You're going to have to shoot me," Brunette allegedly said moments before Thibault pulled the trigger, according to Navari's account.

Thibault said he shot Brunette four times during an encounter that lasted two minutes. He radioed for an ambulance and kept his gun trained on Brunette as the man lay bleeding on the ground.

Brunette was pronounced dead at the University of Vermont Medical Center an hour after the shooting.

Two eyewitnesses provided a different account. Contrary to Thibault's claims that Brunette charged at him, they said "it was Thibault that came across the lawn and toward Wayne with his gun drawn," according to court papers filed by the family's attorney, Richard Goldsborough.

An expert hired by the Brunette family used forensic evidence to determine that Thibault was at least 24 feet from Brunette when he fired one of his shots, the lawsuit claims. Vermont State Police, who handled the investigation, never specified the distance.

Thibault has given inconsistent statements about whether he was backing away from Brunette when he opened fire, according to the family's lawsuit.

The lawsuit also raises troubling new questions about Thibault's character. The officer returned to active duty after authorities cleared him of wrongdoing in the Brunette case, but he soon got into more trouble.

In September 2015, Vermont State Police charged him with domestic assault for allegedly abusing his then-girlfriend. Court documents reveal that Thibault allegedly put a loaded gun to his head and threatened to shoot, and also slid the weapon across a table to his girlfriend. Prosecutors dropped the charges on the condition that Thibault undergo a psychiatric evaluation and complete a firearms training course.

He remained on the force.

The next year, Thibault made a late-night phone call to a retired Burlington police officer, disguised his voice and threatened him. Thibault said it was a "jovial prank." He was placed on administrative leave pending an investigation of that incident. He later resigned.

Tristram Coffin, the attorney who represents Burlington police in the lawsuit, declined to comment, referring to written responses he has submitted to the court.

Coffin has asked a judge to dismiss the case, saying that officers acted within legal bounds. While some details of the incident may be in dispute, Coffin argues, Thibault was following his training when he opened fire on a man with a deadly weapon — the shovel — who refused to drop it.

"There is no police manual that definitively teaches how close one officer should allow an apparently deranged and visibly hostile person, armed with a five-foot-long, metal pointed implement, appearing to intend to do harm and not yielding to commands to advance before using force to intercede," Coffin wrote.

Michael Schirling, who was the Burlington police chief in 2013, declined to comment.

The question of how to treat police officers who are involved in shootings isn't likely to go away.

Just last week, St. Albans residents called 911 to report that they saw a man carrying an assault rifle on Lincoln Avenue. When police confronted Jack Laplant, he allegedly aimed his gun at them. Cpls. Michael Malinowski and Jason Lawton responded by shooting and wounding Laplant.

Seven Days telephoned police and prosecutors to ask whether and when the officers had been interviewed. The calls were not returned.