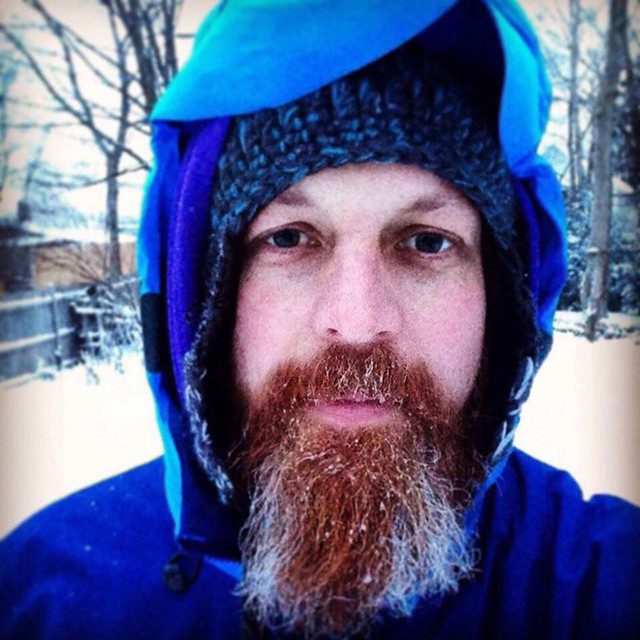 This fall, local composer Greg Davis has been the sonic artist-in-residence at Champlain College in Burlington. The globally renowned experimental musician is the first to hold that distinction at the school, which doesn't have a music program. Davis has spent the fall semester working on new compositions. That's notable, as it follows a five-year period in which he had withdrawn from making music for personal and professional reasons.

From the early 2000s until about 2010, Davis traveled the world as one of the most highly respected artists in the rather nebulous realm of experimental or "other" music. He released some 15 albums on a number of labels, including his own imprint, Autumn Records. He was also a champion of experimental music closer to home, regularly curating and presenting shows in Burlington. It's little wonder he eventually burned out.

For his Champlain residency, Davis says he's returned to making music on a smaller scale, which has fueled him creatively. He has also curated a monthly concert series at Champlain featuring other well-known experimental musicians. Following performances by Ben Vida and Jefre Cantu-Ledesma, in September and October, respectively, the series concludes this Friday, November 20, with Davis performing his new material.

Seven Days recently spoke with Davis at a local coffee shop about his Champlain residency and return to music making.

SEVEN DAYS: Since Champlain doesn't have a music department, it's interesting that they would invite a musician to be an artist-in-residence. What are the goals of the residency?

GREG DAVIS: There are basically three components. The first is that they gave me a little studio up there, so I'm working on music. Another part of it is to set up a concert series at Champlain. So I'm the curator for the series. And the idea was to do three concerts, one per month for the fall term. And I'll be doing the last concert, presenting my new music. And we're going to keep doing it in the spring. I won't be the artist-in-residency anymore, but I'll be curating the concerts.

The third part is doing some classroom visits. I did one the other day, and we talked about how to make your way in the world as a creative person, as an artist or musician, especially the DIY thing. It was cool. I'll be doing another one on musical innovation, which will be more talking about electronic music and synthesizers and that kind of stuff.

SD: What have you been working on?

GD: I'm working on two totally different things that are going in two distinctly different directions. The first thing, which I actually started before the residency, is just pure computer music, all synthesized. It's extreme psychoacoustic music that does weird things with your brain and your ears.

The other thing is a new direction for me. I've been taking snippets from orchestral music, classical music, and weaving that together into this lush, ambient tapestry. That's really pretty and peaceful. I think I'll present that at the concert, because it's what I've been working the most on lately. I think there might be some visuals with it, too, that I created a couple of years ago and would go nicely with it. I also want to present the piece in quadrophonic sound, which is four speakers. That's something I don't get to do much. But in a live context it's really nice, because you can surround the audience with sound.

SD: How has the reaction to the concerts been?

GD: We're getting a mix of students and people from the community, which is really good. Everyone has been engaged and interested. We're doing a question-and-answer discussion after each show. And that's been nice. A lot of people don't have an entry point for this kind of music. It's a brand-new experience. So that gives us a chance to demystify it a bit and put a personal touch on the music. Like, "I'm a normal guy and this is the music I make and why I make it." To me it's important to present the context along with the music. And it's an academic environment, so it makes sense. You couldn't do that at a rock club.

SD: Speaking from personal experience, I can attest that some of this stuff can be challenging.

GD: It can be. If you've never heard sounds like that, you have no point of reference, and it can be shocking and hard to wrap your head around.

SD: With something like psychoacoustics, how much of it is rooted in science and how much is just trial and error?

GD: It's a little of both. There is scientific information about what certain frequencies might do in combination with each other, and that's the starting point. Then it's using your ears and hitting the sweet spot where things are happening. It's creating some sort of third experience where it's not the sounds; it's not your mind; it's somewhere in between. And it's creating this other dimension to the sound, which for most people is really disorienting. But if you're willing to open up to it, it's a magical experience.

SD: It's quite literally mind blowing.

SD: You've been kind of quiet musically for the last few years. Why did you stop making music, and what brought you back?

GD: I took a step back about five years ago. I was reevaluating my relationship with music. I was doing music pretty much full time and did a lot of touring and making records. I spent 10 years putting everything into that. Then I had a kid, and your perspective changes after that. I needed to find a better balance between my musical life and my life. And it's been nice.

The last couple of years I've been easing back into it. And it feels a lot more healthy and comfortable. I know this sounds crazy, but I had to rediscover that I'm just making music because I love it. I like making music and I have ideas about it. It's not really for anyone else, necessarily. It's something I do for myself and then maybe share with other people with a record or a show.

SD: That must be a more fertile, creative headspace to be in, too.

GD: It is. I mean, it's not like I was making music I didn't like during that time. But I got kind of caught up in the hustle and the rat race of the music world: I've got to make a record, then promote it and tour and keep the ball rolling. That's what I got burnt out on.

The kind of music I make, I've never had any delusions of grandeur. I know the ceiling on it. But even within that world, it's the same systems and networks at play. So it's been nice to come back to music in a positive way and reset my intentions about it.

SD: Has your music changed as a result?

GD: For a while I was struggling with what kind of music to make. I'm always interested in different angles of music. And now I feel freer to experiment with things and trusting my intuition. To me being an experimental musician is about being open-minded, trusting your intuition and trying different things, even things that you thought you would never do, just to see where it goes. So it's always changing.

Greg Davis performs on Friday, November 20, 8 p.m., at the Lounge Gallery in the Center for Communication and Creative Media at Champlain College in Burlington. Free.

The original print version of this article was headlined "Reentry Point"