Opinion: After Ferguson, a Consideration of 'Race' 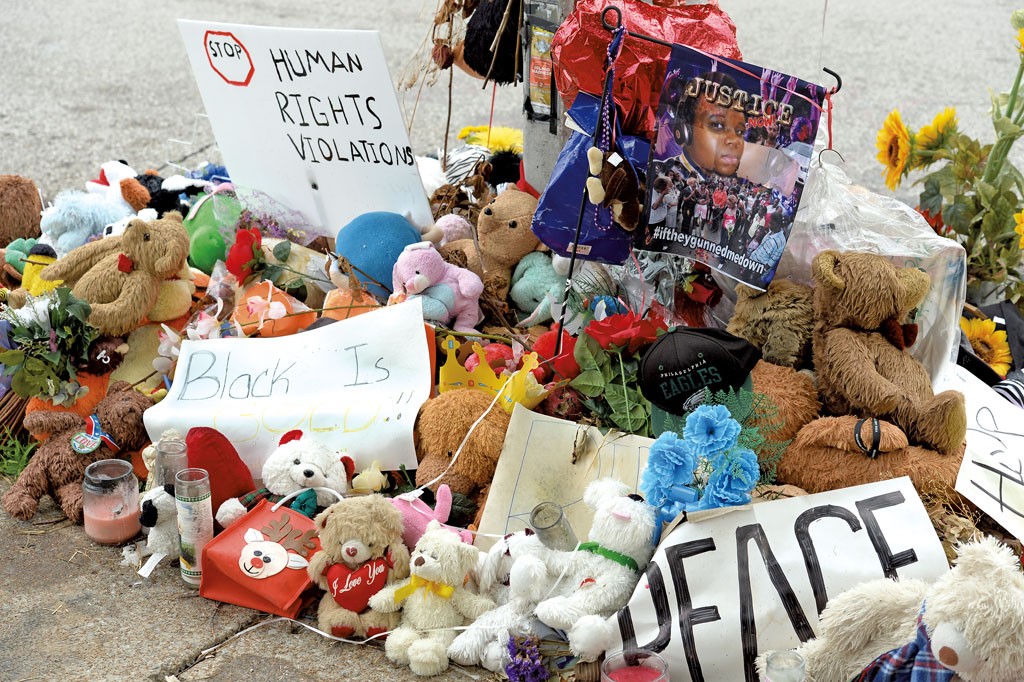 But am I Mike Brown?

A white police officer would never call my neighborhood a "hostile environment," as Wilson characterized Ferguson in his statement to the grand jury.

I would not inspire the near-hallucinatory terror that seized Wilson the day he shot Brown. The cop called Brown "a demon," compared him to Hulk Hogan and, it seems, saw him as the superhuman Incredible Hulk himself. "It looked like he was almost bulking up to run through the [gun] shots," said the officer, explaining why he had to keep firing until the boy lay dead on the pavement.

I have walked down the middle of a street — the start of the altercation between Brown and Wilson — and no cop has driven up to suggest I move to the sidewalk.

I am almost completely certain that no matter how disobediently I behaved, a cop would not shoot to kill me.

As a middle-aged, middle-class white woman, I might ignore this boy and the many other people of color who are brutalized daily by police, prison guards and border patrol agents. But if I do, there will be Mike Browns far into the future.

In other words, as long as I cannot imagine this big, baby-faced brown kid as my son, we're all sunk. Said Baldwin: "We're talking about the life and death of this country."

In the second-whitest state in America, it seems clear that people who think they are white are constantly reminding other people that they are black.

According to a recent USA Today article, in Burlington, Vt., your chances of being arrested are 3.6 times higher if you're black than if you aren't. In Ferguson, Mo., the odds are 3 to 1.

In Vermont, from 2001 to 2010, black people were busted for marijuana possession at four times the rate of white people, according to the Vermont American Civil Liberties Union. The Sentencing Project reports that Vermont's incarcerated population is the second most racially unbalanced in the nation, with a black-to-white ratio of 12.5 to 1, based on prisoners per number of people in the racial demographic.

In a complaint filed in Rutland County Superior Court, and now in federal district court, Aaron Hightower and his nephew, Rahmell Hightower, claim Hatch subjected them to "egregious" unconstitutional treatment, including "assault, battery and unlawful imprisonment" and sexual molestation "under the guise of official duty and routine search." All of Hatch's actions were taken absent anything resembling probable cause.

Within a year's time, Hatch strip-searched Aaron twice and Rahmell once. The precipitating infractions were, in the first case, the one-day-expired license of the driver, a friend of Aaron's; and in the second, the illegally tinted windows of Rahmell's car. In full view of passing cars, the trooper allegedly pulled the men's pants down and shirts up and manhandled their genitals and buttocks.

On the second encounter, Hatch said he smelled marijuana. Rahmell allowed a search of his car, then underwent the invasive, humiliating search. Aaron, who refused to submit again, was arrested and taken to state police headquarters. There he consented to a strip search only under threat of a full-body cavity search. The cop made him spread his cheeks and show his anus anyway. No drugs or other contraband were found in the car or on either man.

Hatch is the same guy who stopped the young African American driver Greg Zullo last winter for having a dusting of snow under his (perfectly legible) license plate. The trooper smelled weed that time, too. When Zullo wouldn't let Hatch search his car, Hatch had it towed to the police station, where again he found no pot. Zullo was left to walk home eight miles in the cold and to pay $150 for the tow. The ACLU is suing the state on Zullo's behalf.

Both suits claim Hatch violated the plaintiffs' constitutional protection from unreasonable search and seizure, apparently a habit of the officer's. "We have had multiple cases in criminal court dismissed because the judge has found that Lewis Hatch's search of persons and vehicles was unconstitutional," said Mark Furlan, the Hightowers' attorney.

But is the trooper singling out black people for abuse? The law makes it hard to affirm. U.S. courts have ruled that discrimination isn't discrimination unless it's clearly intentional. The state police, in fact, have bias-free policing rules. Officer Hatch uttered no racial slurs. The Hightowers' original lawsuit said Hatch targeted them out of "ill will and animus for their race." But when the defendant moved to drop the claim that he had violated the constitutional right to equal protection, the judge in federal court, where the lawsuit now resides, ruled in his favor. "Evidence showing that the challenged conduct was arbitrary is not enough to permit an inference that it was intentionally discriminatory," the judge wrote.

Draw your own conclusion.

Individuals may be bigots. But the state holds the power to define the problem and its solutions, and to visit violence on particular bodies and spirits.

So a cop kills an unarmed man. The police botch the investigation. The prosecutor engineers a prejudicial grand jury proceeding, then stands before the press and presents the alleged perpetrator's case as if he were the officer's defense attorney. (Most experts agree that St. Louis County prosecutor Robert McCulloch would have gotten an indictment if he had wanted one. As New York State Judge Solomon Wachtler once put it, prosecutors have so much sway over grand juries that they can convince one to "indict a ham sandwich.") The cop goes on television to broadcast his "clear conscience."

"What they've gone through is unacceptable," Gov. Jay Nixon of Missouri declared the night after fires in downtown Ferguson. "No one should have to live like this. No one deserves this."

Well said, gov, you might reply — until you realize Nixon was not talking about Mike Brown or his family or the residents of Ferguson. He was lamenting the fate of some people in Ferguson — those who own businesses threatened by fire and looting.

On CNN, Wolf Blitzer also has been preaching to "the looters." "Demonstrations, fine. Protest, fine. Expressing anger, fine," he said on one of many occasions. "But do it peacefully and don't engage in violence."

Yes, it's senseless and wrong to torch a local business. Yes, nonviolent civil disobedience can work. It got the Civil Rights Act passed — in 1964. And 50 years later, police are still killing black kids and getting away with it.

Nixon, Blitzer: You're telling the wrong people to act lawfully.

But, as Baldwin suggests, maybe the whole conversation is wrong.

A tentative and pale Obama told the nation last week, "The fact is, in too many parts of this country, a deep distrust exists between law enforcement and communities of color ... Some of this is the result of the legacy of racial discrimination" in America. But the president had a solution. He was dispatching the attorney general "to help build better relations between communities and law enforcement."

Baldwin was already tired of such talk in 1986. "It's late in the day to be talking about race relations," he answered a questioner at the National Press Club. "And as long as we have 'race relations,' how can they deteriorate or improve? I am not a race and neither are you. No ... One of the things that most afflicts this country is that white people don't know who they are or where they come from. That's why you think I'm a problem. But I am not a problem; your history is."

As long as we do not all think we are Mike Brown, there is no hope for any of us.

The original print version of this article was headlined "Am I Mike Brown?"