After Decades of Feuding, Is It Time to Disband the Tiny Town of Victory? | Politics | Seven Days | Vermont's Independent Voice

After Decades of Feuding, Is It Time to Disband the Tiny Town of Victory? 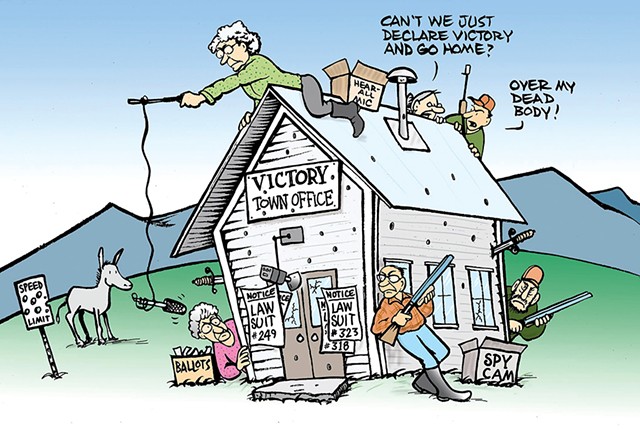 Victory Town Clerk Carol Easter has a lot on her mind these days. Last month, a predecessor sued her, alleging she committed "massive voter fraud." Meanwhile Easter, one of 72 residents in the tiny Northeast Kingdom burg, is helping to lead an effort to disband the town altogether and transform it into an unincorporated "gore."

But Easter had a more pressing concern last Tuesday. The white-haired 72-year-old, who moves slowly but is always quick with an acerbic response, pointed to a new security camera mounted high on a wall and trained on her desk in Victory Town Hall.

"They've been spying on me," Easter told a reporter.

They, Easter said, are longtime rivals who would like to catch her doing something illegal. Led by selectmen Walter Mitchell and Walt Neborsky, the group has gone as far as to change the padlock on a town-owned cabinet in which footage from the camera is stored. No one but Mitchell and Neborsky is allowed to access the images.

The allegation might sound paranoid to anyone unfamiliar with how Victory governs itself. But Easter's rivals happily confirmed that she is telling the truth.

"Mr. Mitchell put the lock on there," Neborsky explained. "When somebody needs to get footage, he opens it up and can do so."

Two years ago, Seven Days visited Victory to document a decades-long feud between two factions of residents battling over minor matters. There were allegations of slain pets and misappropriated town money, and some of the players openly wished their opponents dead. The Essex County Sheriff's Department started sending an officer to keep the peace at selectboard meetings.

Despite the law-enforcement presence, the feud has intensified, spilling over from town hall into the judicial system.

In addition to the voter fraud case, the bickering parties have filed at least five other lawsuits in the past year. One alleges malfeasance in a justice of the peace election. The Elizabeth Brown Humane Society, run by Mitchell's wife, is countersuing the town after a politically charged property tax dispute. And a kennel owner down the road from the humane society claims town officials and a neighbor harassed him.

Victory's population could fit into a Chittenden County apartment building. But Vermont Secretary of State Jim Condos, who advises officials on election laws, said his office has spent more time dealing with complaints and questions from Victory than from any other community in the state. Condos confirmed that the fighting has escalated.

"Essentially, what you've got is the Hatfields and McCoys going at it," Condos said. "It seems like all they do is file lawsuits against one another and try to make life difficult for one another. You wonder what's next."

"Essentially, what you've got is the Hatfields and McCoys going at it." Secretary of State Jim Condos tweet this

Victory was one of the last towns in Vermont to receive electricity and, sitting 15 miles northeast of St. Johnsbury, is among the most isolated communities in the state. Residents live primarily along three dirt roads etched into two hillsides, divided by 20,000 acres of state-owned forests and bogs. There are only two ways into town, but in winter and mud season, one of them, an unmaintained class-four road, is impassable. In the past year, town officials have debated taking down the speed limit signs, because so many locals use them for target practice.

The latest conflict erupted in March, when former town clerk Tracey Martel, an ally of Mitchell and Neborsky, filed a lawsuit against Easter and some of her political associates on the Victory Board of Civil Authority. Martel alleged that the defendants had packed the voter checklist with nonresidents to help their side's election prospects on Town Meeting Day. Additionally, the lawsuit accused Easter of being deliberately slow in sending out absentee ballots to supposed political enemies and inappropriately helping an infirm woman fill out her ballot.

Martel lost to Easter by three votes in the town clerk's race. Easter's husband, Lionel, tied Otis McKennistry in their race for a selectboard seat.

"Numerous nonresidents who are political allies of the individual defendants have been placed on the voter checklist, and voted by absentee ballot in the March 7, 2017 election," reads the lawsuit, filed by Deborah Bucknam, the Republican candidate for Vermont attorney general who lost last fall to Democrat T.J. Donovan.

"We're not playing games with the checklist," Easter said, calling allegations to the contrary "nothing but lies. These people have bullied us and bullied us."

Martel did not respond to a message seeking comment. But, in an interview, Bucknam pinned blame for the ongoing bickering on Easter, Loomis and their other allies.

"The people I represent have not engaged in name-calling at all," Bucknam said.

The Secretary of State's Office examined claims that people added to the checklist had inappropriately voted in Victory, Condos said. The result?

"We have not seen any true voter fraud," Condos said, though he added that he could not confirm whether everyone on the checklist lived full-time in town.

Laws covering residency and voter eligibility are complex. Generally, Condos said, people can be registered in a town if they spend a certain amount of time there, or move away but intend to return. As long as they vote in only one place — and Condos said everyone on the Victory checklist voted only in town — they have likely done nothing wrong.

"It's not as simple as one would think," Condos continued. "Someone could live in a different town or state and still maintain that they held onto their residency in Victory."

Easter knows that now. Just last year, she and her allies on the Board of Civil Authority tried to boot Neborsky's two stepsons and his wife, Ruth, off the checklist, saying that they were not permanent residents of Victory. That spawned yet another lawsuit.

A judge sided with the Neborskys and restored all three to the list. The sons were away at college and in military service. Ruth Neborsky's residency was also at issue. Easter — her next-door neighbor — maintained that she no longer lived with her husband. Neborsky denied that.

A few votes can make all the difference in a town where almost a third of the residents holds elected office, and power swings back and forth between factions in close, bitter campaigns. Money is certainly not the motivator: Victory's operating budget was a mere $112,000 last year.

Still, the town coffers have been a source of controversy.

In 2016, Barre accountant Bonnie Batchelder, who had been commissioned to study Victory's books between 2009 and 2012, revealed her findings. She said she discovered "alarming information" including misuse of town funds for purchases, discrepancies in transaction checks and invoices totaling more than $250,000, and missing tax forms and bank statements. Her findings focused on the offices of town clerk and road agent — positions held by Walt and Ruth Neborsky during that timeframe.

Regardless, Walt Neborsky won a seat on the selectboard in March 2016, dethroning Loomis and joining his ally Mitchell in taking the majority on the three-person board. Neborsky and Mitchell then fired Batchelder and refused to pay her fees, according to meeting minutes.

"The audit was bogus," Neborsky told Seven Days. "There is no truth to it. There is no money missing; everything was there."

"The audit raised a number of questions which, on further investigation, were resolved," Illuzzi said. "It didn't appear as though there was criminal behavior."

Two weeks ago, someone posted a flier at the nearby Mooselook Restaurant and at Barnie's Market. It pictured Easter, Loomis and two of their allies, Sandy Hudson and Jan Stanley, beneath a written message: "You can't fix stupid, but you can vote it out."

Loomis called the flier — for which no one has taken responsibility — "childish."

As they did two years ago, some residents suggested that the tensions will ease only after some of the protagonists pass away. But in recent weeks, a few of the combatants have proposed a different solution: Perhaps the Town of Victory itself needs to die.

In February, Loomis, Easter and others circulated a petition to hold a town-wide vote to disband Victory and make it the seventh unincorporated community in Essex County. There would be no more selectboard, no more town clerk, no more Board of Civil Authority to fight about. But the other side is — spoiler alert — vehemently against the idea. At least for now, it's been tabled.

No one in the Secretary of State's Office could recall the last time a Vermont community disbanded, Condos said, adding he isn't sure what the procedure would be.

But if Victory went that route, the former town would likely join six other unincorporated areas that are run by a single manager. Three elected representatives of the Unified Towns and Gores in Essex County chose that individual, who arranges for essential services. Who selects the reps? The voters in the unincorporated communities.

That means: Victory's messy brand of democracy could go regional.