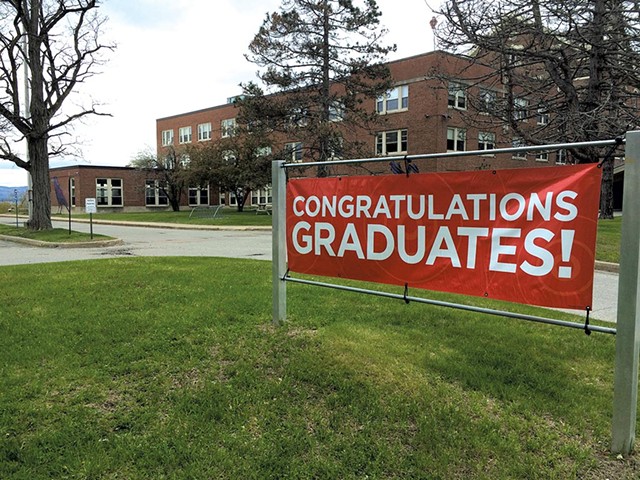 Two days after it handed out diplomas to 55 smiling graduates, Burlington College announced that it would close permanently at the end of the month because of "crushing debt," lack of cash and the impending loss of accreditation. Observers have wondered for years how the tiny liberal arts school could work its way out a financial choke hold.

Monday's announcement settled that question, but it raises a number of others. Where will the remaining 100 students go? What will happen to the property? What does this mean for ongoing disputes over donations to the college? And who is ultimately responsible for the school's downfall?

That last question has immediate national political significance. Jane O'Meara Sanders, wife of presidential candidate Bernie Sanders, was the school's president when it took on the debt that led to its demise. Under her leadership, Burlington College bought a new 32-acre lakefront campus in 2010 using $10 million in loans from the Roman Catholic Diocese of Burlington, the former landowner, and People's United Bank. The board of trustees supported the purchase but forced O'Meara Sanders to resign the following year under mysterious circumstances.

At a press conference held Monday, interim president Carol Moore, who was hired last year, refused to assign blame to any particular person or administration. But within hours, many national news outlets had picked up on the connection between O'Meara Sanders and the imploding college. Politico ran a story with the headline "Real estate deal brokered by Bernie Sanders' wife sinks Vermont college."

The Washington Post's James Hohmann concluded that the college's collapse is "a big problem" for the campaign, suggesting that it gives credence to the criticism put forth by Hillary Clinton's campaign that Sanders hasn't been thoroughly vetted by the media and is "making fantastical promises that are unfeasible."

The Sanders campaign has so far refused to comment.

In Vermont, the culpability question isn't just about politics; for people grieving the loss of the school, it's personal. And O'Meara Sanders isn't the only person facing scrutiny.

Mark Profit, a 2007 graduate who designed his own economics and political science major, said, "This wasn't just a college ... It was unlike anything I have ever been involved in. It was unique, and now it's gone." Founded in 1972, the school catered to nontraditional students.

Profit said he and other alumni, some of whom are still paying off student debts, plan to demand answers. "We're not letting this go. Somebody must be held to account." He also pointed out that while most of the attention has been focused on the college's recent presidents, its board of trustees shares fiduciary responsibility for the fail.

Local activist Robin Lloyd was among the board members who supported O'Meara Sanders' plan to buy the new campus. "Did we sufficiently vet it? I feel we didn't," said Lloyd, who explained, "I was relying on the financial knowledge of other people on the board, and Jane's enthusiasm for it, and also on Jane's fundraising ability."

Among those "other people on the board" was its then-treasurer, Jonathan Leopold. As Burlington's chief administrative officer under then-mayor Bob Kiss, he received much of the blame for the Burlington Telecom scandal, which broke the year before the Burlington College land deal went through. Leopold, who resigned from his city hall job in 2011, could not be reached for comment.

O'Meara Sanders left the same year, and her chief financial officer, Christine Plunkett, took over as president. Plunkett served until 2014, when she resigned unexpectedly in the middle of a student protest. At that point, the college was on the verge of going broke, and the board appointed Mike Smith as interim president. Under his direction, the college gained some stability by selling 27 acres of land to developer Eric Farrell, reducing its debt by $7 million.

Moore, who took over in February 2015, insisted the college was on the upswing. At the press conference, she told reporters that her administration had cut operating costs by 80 percent, and enrollment was on pace to increase next fall.

The turnaround could have continued, Moore suggested, if People's United Bank hadn't decided in late April to terminate the $1 million line of credit it had made available to the college.

According to board member Tom Torti, who is president of the Lake Champlain Regional Chamber of Commerce, the credit line was critical to the college's survival, because it needed cash to weather "the cyclical nature of tuition and federal student aid reimbursements."

The bank's decision to pull out took Torti by surprise. "My feeling as a board member was that we were as close as we ever have been to financial solvency ... We had gotten through that bleak period, and we were building back our reputation." 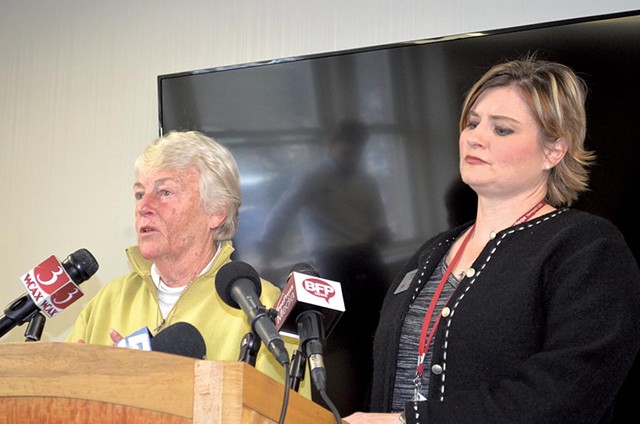 Neither Torti nor Moore would speculate on the bank's logic, and its Vermont president, Michael Seaver, told Seven Days that he couldn't comment on client matters.

Smith said he was also surprised by the bank's decision, because "all indications were, the school was headed in the right direction." Furthermore, People's United was financially protected if the school were to close, according to Smith.

He thinks the reason might have something to do with another controversy that dates back to O'Meara Sanders' tenure.

It's unclear whether the feds complied — Miller and the FDIC spokesperson both declined to say. Asked by reporters Monday whether the college was under federal investigation, Moore responded, "No comment."

During a later interview, Torti told Seven Days, "I have heard that federal people have been asking questions." But he said he hadn't been interviewed and didn't know anything more.

He predicted that such a response would "only heighten" it.

The fate of the college's line of credit was up in the air at the time the New England Association of Schools and Colleges was deciding whether to continue accrediting Burlington College. After it placed the school on probation nearly two years ago on account of its shaky finances, NEASC voted to revoke its accreditation, starting next January.

"They ran out of time and money," explained Barbara Brittingham, president of NEASC's Commission on Institutions of Higher Education. "The school had made some progress there, but not enough," she said, noting that the college continued to have "enrollment challenges." Asked whether uncertainty around its line of credit played a role, she said, "Certainly it would have been better to have a line of credit."

Moore disclosed Monday that Burlington College, People's United Bank and developer Farrell have an agreement that allows Farrell to purchase the college's remaining property from the bank. Farrell said he isn't sure what he'll do with the additional property. "The only thing that is probably safe to say is, that building won't be residential," Farrell said, explaining that he's already planning to build up to 770 units on the land he currently owns.

He declined to say how much he'll pay for the extra real estate.

An ongoing lawsuit against the college could complicate the deal. Last February, the executor for the estate of former Burlington College professor and donor Jason Conway sued the school for allegedly spending student scholarship money to pay for expenses. The plaintiff's attorney, Norm Blais, said he had reached a settlement agreement with the college but was waiting for People's United Bank to sign off on it when the school announced it was shutting down. Now that appears to have fallen apart, and Blais has filed a request in Superior Court asking for the equivalent of a mortgage on the property as security while the case continues to work its way through the court system.

Of course, the looming lawsuit, financial fracas and political implications are beside the point for Burlington College students who are suddenly without a school. Of 70 currently enrolled, 30 have put down deposits for the fall semester.

Moore said the college has already made arrangements with Champlain College, Marlboro College and the Vermont State Colleges to allow students to transfer and carry over their credits. But she acknowledged that in some cases, students might be on the hook for higher tuition costs. Others may be forced to adjust their interests. None of the institutions that have signed up to accept students offer majors in transpersonal psychology, nor do they have paralegal certificate programs.

Athena Pepe, a current student, declined an interview, saying, "I'm too stressed out to talk about it."