After Arson, Burlington Church Gets a New Steeple 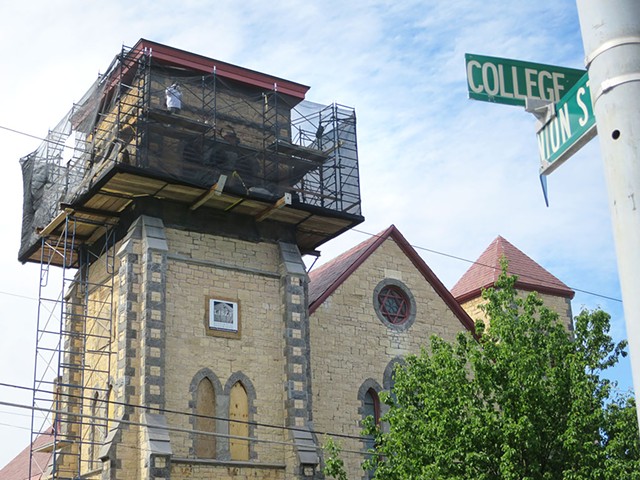 Burlington may not have much of a skyline, but a few of its taller architectural elements do command attention and admiration. One of those — the steeple of the College Street Congregational Church — soon will be restored to its position of prominence in the cityscape after a nearly three-year absence.

The 60-foot octagonal spire topping the 150-year-old Gothic Revival building was destroyed in an early-morning fire set by an arsonist in October 2013. A replica of the original will be put in place by J.A. Morrissey contractors of Williston in late August.

Barre-based Southgate Steeplejacks is building the replacement in accordance with specs supplied by Burlington architect Ann Vivian. Jay Southgate, the company's founder and owner, has restored or built 160 steeples over a 20-year career; he says the Congregational Church job is not the most difficult he's had. "But it is one of the sweetest," Southgate attests.

The unusual red slate steeple, with its illuminated clock and dormer windows, qualified as "an absolute showstopper," affirms Paul List, head of Liszt Historical Restoration, which is carrying out preparatory work on the church's tower.

In addition to the steeple, the church features yellow sandstone blocks on its exterior walls that are accented by gray limestone quoins. The two-tone masonry, combined with a red roof that matches the steeple, makes the Congregational Church a striking presence on the corner of College and South Union streets. Plus, the building's colors darken and become streaked when wet with rain.

The church may have had an even more arresting look when it was built by Boston architect J.D. Towle between 1863 and 1866. The weathered yellow stones we see today were originally pale pink, List notes.

Liszt Historical Restoration (the owner, an amateur violinist, added a Z to his business name to link it with Hungarian composer Franz Liszt) is replacing some weakened gray marble quoins with darker stones near the top of the tower on which the steeple will sit. Mortar is being repointed there, as well.

Tom Corr, vice president of the restoration company, climbs down from the scaffolding around the tower to explain Liszt's aims and methods. "Inappropriate maintenance over the years and plain lack of maintenance" account for the need to stabilize the tower before the steeple can be reerected, Corr says. "The fire didn't help, either," he notes.

Vintage materials are being used to preserve the integrity of the original design, Corr adds. Replacements for the decaying quoins come from the Champlain Black Marble Quarry on Isle La Motte, the source of stones used to build the church. Similarly, the red slate for the new steeple was cut from the same quarry in Granville, N.Y., that supplied the original tiles. And the newly inserted lime putty mortar, which Liszt produces, is the same substance workers slathered between the stones a century and a half ago. It was also used in ancient Rome.

"This is the way the old world was built," List declares as he gestures toward the church.

Although the exterior retains a handsome appearance despite the loss of the steeple, the church does seem stunted to longtime admirers. The disappearance of the clock, which could be relied on for accurate readings, has likewise disconcerted some patrons of the nearby Fletcher Free Library and Greater Burlington YMCA. They gaze skyward only to realize they now have to look down at their smartphones to learn the time.

Jonathan Farrell, head of the Congregational Church committee in charge of the restoration, especially yearns for the return of the clock, which was repaired after having suffered severe damage in the fire. Twice a week, Farrell used to oil and wind the timepiece manufactured by E. Howard & Co. of Boston.

The bill for the restoration project will total about $820,000, Farrell says. Much of that cost is covered by insurance on the steeple; donations from members of the congregation cover the rest.

Farrell, who lives a few streets away, saw the steeple burning after being alerted by a friend who had pedaled past the church on an early-morning bike ride. "I had a helpless feeling," Farrell recalls. "It was like watching a friend in a hospital through a glass partition."

He's pleased, he says, to have helped organize the restoration of a church with a proudly progressive history. "It was founded by people opposed to slavery, and it was there during the women's suffrage movement, the civil rights movement, the achievement of marriage equality," Farrell recounts. "I'm hoping it will be there during movements in the coming years."