After a Murder and Increased Drug Use, Complaints Mount at Burlington’s City Hall Park 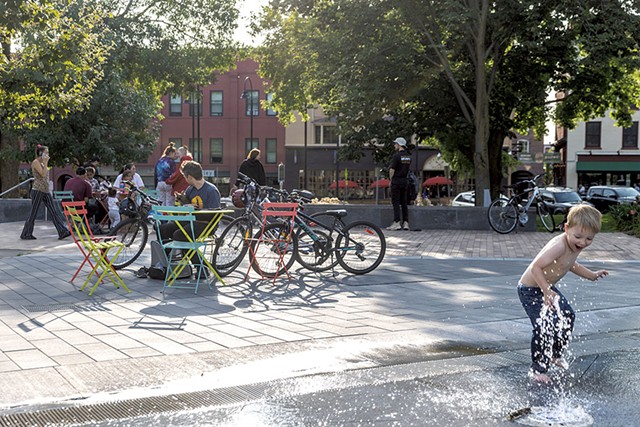 Mayor Miro Weinberger, a student of urban design, had championed the idea that the $5.75 million renovation would transform how residents perceive and use the green space abutting city hall. He dedicated the "revived" park to the victims of COVID-19, a pandemic then still raging, and said he hoped it would serve "as a beacon of hope and renewal in these times."

Nearly two years later, City Hall Park is a long way from fulfilling that optimistic vision. Despite a blitz of city-sponsored events that have drawn more visitors, the park increasingly serves as visible evidence of the city's most pressing challenges: its housing crisis, the spike in gun violence, and a social services system that can't handle the pandemic-propelled surge in addiction and mental illness. The mayor is facing pressure to bring change to the park, though the complexity of the situation, coupled with widespread staffing shortages, suggests an immediate solution is unlikely.

Earlier this month, the park was the site of a late-night, execution-style murder — the fourth time shots were fired there since June 2021. Some visitors use drugs inside the park's new public restroom, and, on August 20, a man was found dead from an apparent drug overdose in a public bathroom inside city hall. Between July 2021 and June 2022, emergency crews took 10 people from the park to the hospital as a result of drug overdoses. 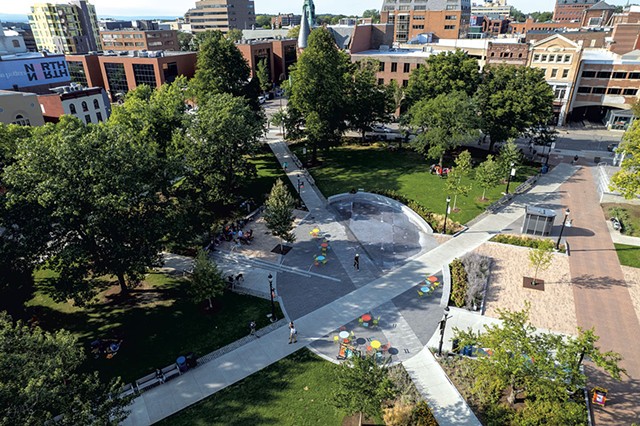 Burlington police are on pace this year to receive more calls for problems in the park than at any point in the last decade. Weinberger said the number of complaints he's fielded in recent months is "unprecedented."

"I think, at times, it has been worse than prior to the pandemic," he said.

That sentiment is shared by local business owners, who didn't hold back during a September 9 meeting with the mayor. The park has become a "poster child" for the city's problems and a public relations disaster, said Eric Farrell, a developer of upscale apartments.

"I think the perception is: If we can't clean up City Hall Park, then we've lost control of the entire city," Farrell said.

Many of the 100 or so people who attended the virtual public safety town hall spoke in similarly pitched tones about how unruly behavior throughout the nearby Church Street Marketplace is disrupting their businesses and scaring off customers. Ernie Pomerleau, whose late parents donated $500,000 to the City Hall Park renovation and have their names etched into the new fountain, bemoaned "aggressive" panhandling on Church Street and the number of drug users and homeless people sleeping in and around the park.

"This thing is beyond epic," Pomerleau said.

Deb Miller, co-owner of Ken's Pizza and Pub, claimed that tourist visits to downtown Burlington had been replaced by "gangs."

City Hall Park has long been a contested space, thanks to its central location near essential services and a boutique shopping district. Those with a voice in city politics have expressed safety concerns for years, while others have detected in such complaints a bourgeois discomfort with the presence of the poor, homeless and nonconforming.

When the park was closed for construction in 2019, a couple of homeless men who frequented the park formed a mini-encampment on a nearby sidewalk in protest; business owners complained that other displaced park-goers were disrupting Church Street. The construction also displaced the city's beloved Saturday farmers market, which moved to a location on Pine Street and has yet to return downtown.

Weinberger believed that improving the park's design and hosting more events would attract people there and, in turn, deter crime and antisocial behavior. The extensive renovations, nearly a decade in the making, were financed through a mix of philanthropy, tax increment financing and other capital revenue streams, along with about $1 million in general taxpayer funds.

There's a lot of great stuff happening in the park. Michael van Gulden tweet this

"There's a lot of great stuff happening in the park," said Michael van Gulden, CEO of Chocolate Thunder Security, a private security firm the city uses at city hall. His staff generally wear yellow polo shirts, carry walkie-talkies and are unarmed. Van Gulden attributes some of the public perceptions of the park to the "haves" being "dismayed by the people who have not."

Yet a video posted to Twitter of a recent encounter between a Chocolate Thunder security guard and a park-goer only underscored the current tensions. The video captured an employee named Mac McGill confronting a shirtless man who McGill said was injecting drugs on the steps of city hall.

"I'm minding my own fucking business," the man can be heard telling McGill, who is pointing and yelling at him when the 35-second clip begins.

"No, it's my business when you've got a drug kit on the fucking steps!" McGill replies.

McGill then tells the man that "you're on your way to dying young" and to "get off the stairs." A second video captured McGill picking up a needle from the top of the steps, then accidentally pricking himself with it.

The city hired Chocolate Thunder to monitor city hall and City Hall Park in 2021 but scaled back the arrangement this year to exclude the park due to staffing constraints, Weinberger said.

In an interview, McGill said he was posted at city hall part time for nearly a year — usually as the only uniformed rule enforcer in the area. Police, he said, almost never responded when problems arose. McGill said he'd been threatened so many times at city hall that he began carrying pepper spray, but he was proud of his work.

After the video was posted, McGill said he was offered a new post in Essex, which would have doubled the length of his bus commute from Montpelier. Instead, he quit but considers his departure a "de facto firing." Van Gulden declined to discuss McGill's employment but said he was not fired.

"Obviously I'm the problem in City Hall Park, not the needles, not the drugs, not the execution-style murder," McGill said sarcastically.

Howard Center's Street Outreach program, a team of six when fully staffed, can help when people using the park act in problematic ways, said Deanna Ryerson, the organization's crisis director. Street outreach workers get to know regular park visitors over time and help connect them to social services when desired. Those relationships are helpful when someone's in crisis, she said, but their knack for empathetic conversation and de-escalation isn't a panacea, especially for more serious behaviors involving weapons or drug sales. Law enforcement and social workers each play important roles, and neither has the resources needed to meet the scale of the problems Burlington is facing, she said.

The city created a plan this summer to restore regular police foot patrols downtown, but Weinberger said the department frequently doesn't have enough officers on shift to make that happen. The mayor said he thinks the problems at the park have been made worse by an evolving drug market that has pivoted toward fentanyl and methamphetamine. Meanwhile, homelessness has gone up dramatically, Weinberger said, with between 60 and 70 people sleeping outside in Burlington every night.

"These are big factors that certainly are not specific to City Hall Park, but I do think that City Hall Park is a place where ... you can really see them very visibly," Weinberger said.

There are times when people from "enormous socioeconomic difference" have been able to enjoy City Hall Park simultaneously, the mayor said. But he worries that the park's reputation is keeping kids and families away. He said the King Street Center, where his wife works, got raincoats and water shoes for children in its Head Start program so they could take trips to the park's new fountain. They haven't used the equipment once this summer, Weinberger said.

Officials are working aggressively to come up with new solutions, the mayor said, but it's going to take time because the drivers of the problems are complex and resources are limited.

"We are going through a historically challenging time, and it's not just here," Weinberger said during his recent meeting with business owners.

At the same time, the mayor told Seven Days, he doesn't want to impose new rules or policies that could push out park users "because of the way they look, the way they dress ... that doesn't meet some middle-class standard." Howard Center's Ryerson also questioned the notion that the city can simply "clean up" the park.

"When we say 'clean up the park,' what does that actually mean?" Ryerson asked. "And where are those people to go for help, and how are they going to get help, and do they want help?"

"We need to offer certain services. We need to address these very serious concerns. But we need to embrace everyone along the way," she added.

The park was getting ample use last Thursday. A couple groups of regulars hung out in different quadrants, chatting, eating and sharing smokes. A Jay-Z song floated from a portable speaker as families, including some with infants and toddlers, passed through or ate lunch. A woman with a walker sat on one bench; on another, a younger person toting a sealed Childish Gambino record drew in a sketchbook. On a third bench, a man was gripping a sizable glass bong, and on a fourth, a Seven Days reporter surveyed his surroundings.

In the northeast corner, near the Whiskey Room, a man who appeared high ambled awkwardly on the sidewalk for about an hour, as if he were trying to balance on a paddleboard. He eventually removed his shirt and disappeared in the direction of Church Street.

As the noon lunch hour wound down, about 40 people were spread across the park. One woman's particularly conspicuous setup included camp chairs and a hamper's worth of clothes that she'd draped over benches to dry. She was bent over the edge of a mulched bed of plants, tossing handfuls of roots into a cardboard box — weeding.

The original print version of this article was headlined "No Picnic | After a murder and increased drug use, complaints mount at Burlington's City Hall Park"