After a Lost Pandemic Year, Rice’s Stunt Nite Brings Students Together in Song and Dance 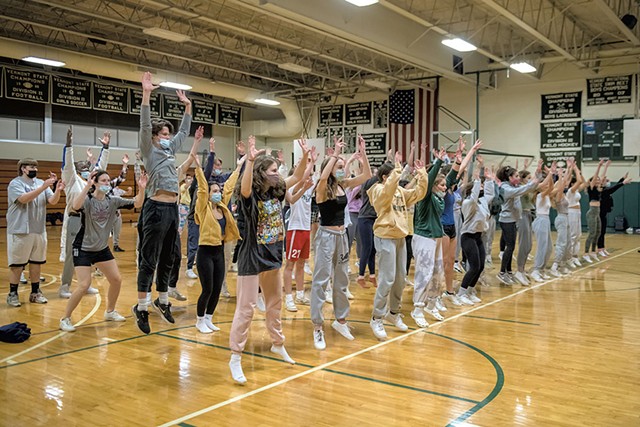 Grace Kline was extra busy in late October and early November. The 17-year-old Rice Memorial High School senior from South Hero was wrapping up rowing season, working on college applications and staying on top of her six courses, including two advanced placement classes.

Nevertheless, she added to her schedule auditions and rehearsals for Stunt Nite, an annual Rice theatrical production that culminates with performances at the Flynn Main Stage in Burlington during Thanksgiving week.

"At Rice, you're the lame one if you don't do Stunt Nite," Kline said.

Rice students — and behind-the-scenes elders — have been putting on Stunt Nite for 91 years. This year, 340 of the South Burlington Catholic high school's 400 students are participating, according to organizers. The event is a competition among the four classes, whose costumed students perform acts with singing, dancing and comedy before an audience of family, friends, alumni and judges. 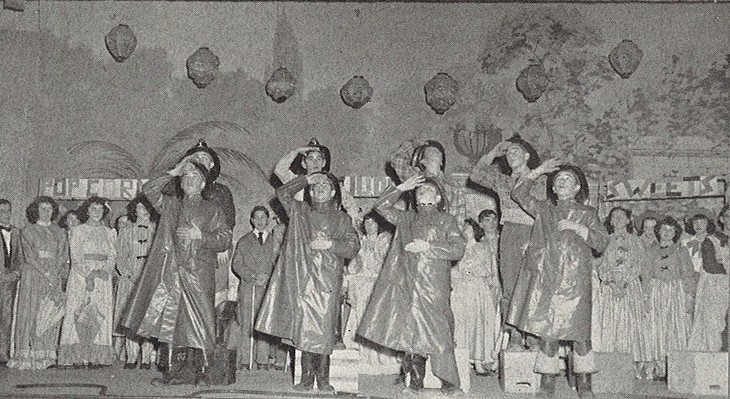 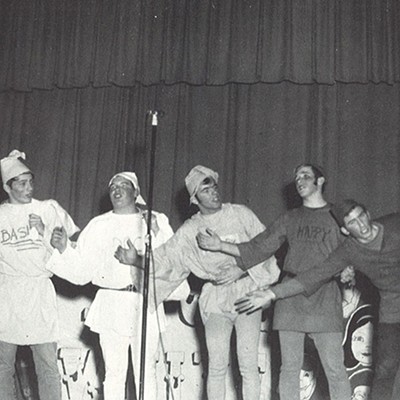 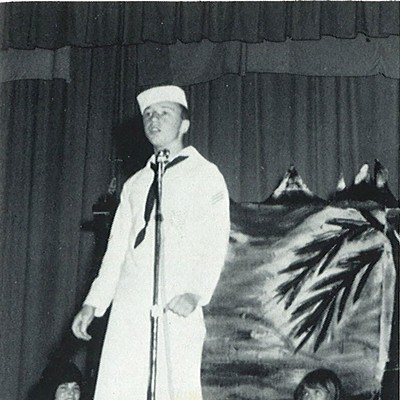 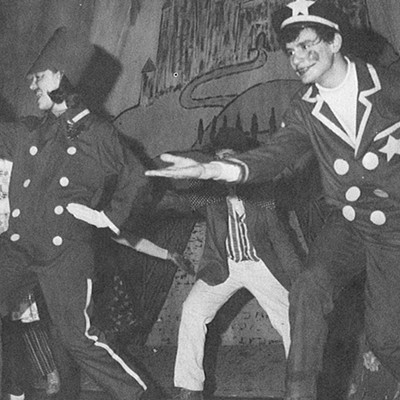 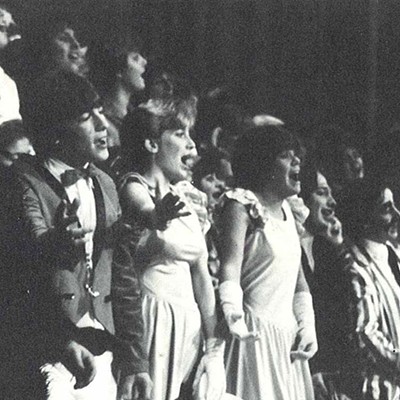 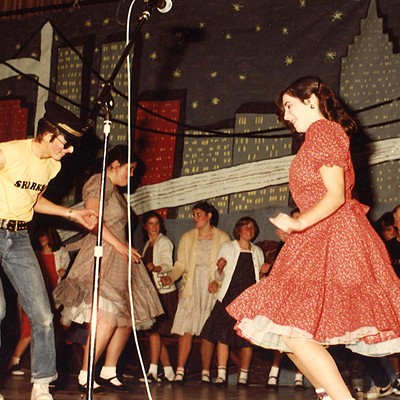 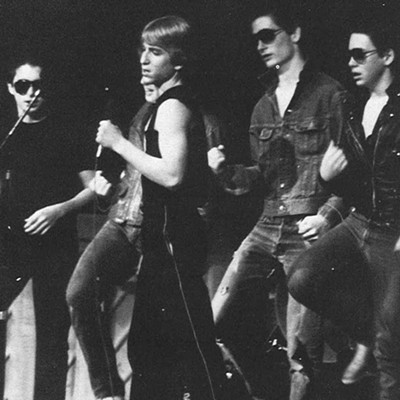 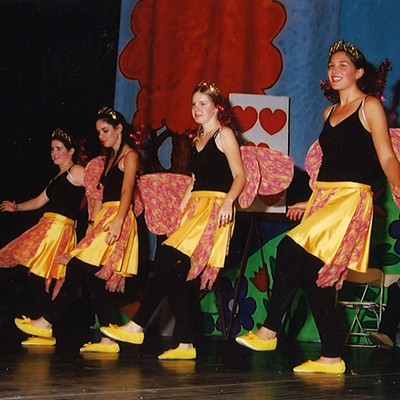 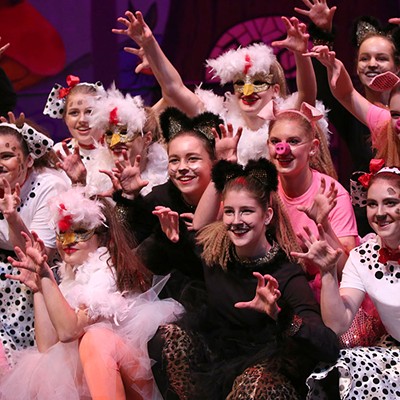 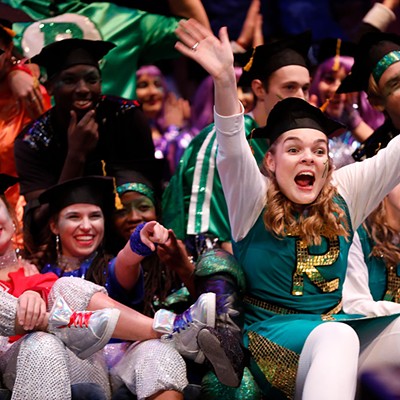 During recent rehearsals at school, masked kids could sneak peeks of each other practicing routines with props that included umbrellas, suitcases and beach balls. The theme of each parent-scripted show remains top secret until the dress rehearsal at the Flynn — held this Friday, November 19. The public can attend matinee and evening performances on Tuesday, November 23.

After a Stunt Nite-less 2020 due to COVID-19, students say they're excited for its return.

"It feels like we've been away from it so long," senior Caitlin Balon said during a recent rehearsal. "But I think we all jumped back into the craziness of Stunt Nite like it happened yesterday."

"We want to win bad," her classmate Kline said. "This is our year to shine. It's all you dream about since your freshman year."

The production dates back to May 1929, when Cathedral High School, Rice's predecessor, hosted an event called Vaudeville Nite. The show was a hit, so a second one was presented in November of that year, establishing the fall tradition.

As a clip under the heading "Amusements" in the May 18, 1929, edition of the Burlington Free Press revealed: "The Cathedral High school auditorium was packed to the doors last night at the vaudeville entertainment staged by the members of the school student body. There was action every moment and the students displayed a degree of talent unusual for high school age."

Stunt Nite is rich in tradition and big on rules. The former includes a pizza party at school after the performance, as the judges' scores are tabulated and students await the midnight announcement of the winner. Meanwhile, parents do a little partying of their own.

"I wouldn't miss it," said Jerry Tarrant, 55, Rice class of 1984. "It's a very fun community environment. We shoot out of the Flynn and grab a quick beer [at RJ's] between the shows."

Better known for his prowess on the hockey rink than onstage in high school, Tarrant nonetheless remembers singing "Tiptoe Through the Tulips" with his friends at Stunt Nite. A state hockey title eluded him in high school, but Tarrant's class scored three consecutive Stunt Nite victories.

Stunt Night regulations and guidelines can be found in a 32-page handbook compiled by the show's director, Catherine Metropoulos of Charlotte. She's the mother of three former Rice students and grandmother of eight. "My grandson is a freshman at CVU, and it's killing me," said Metropoulos, who has directed Stunt Nite for 20 years.

Her duties range from ensuring that each class has a full slate of volunteers to selling ads for the program and selecting the judges, who remain anonymous but must be familiar with the event. 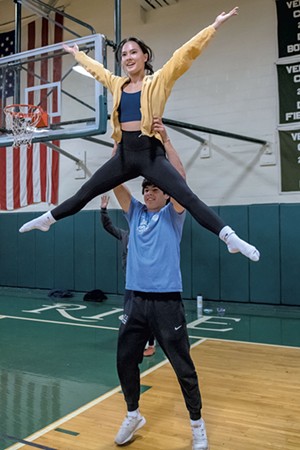 Metropoulos bakes trays of baklava and cookies for the Flynn tech crew. But she's not interested in a thank-you present from Rice. In lieu of flowers or chocolate, she asks that the school purchase something in her name for the students, such as books for the library.

"Stunt Nite is for the kids" is Metropoulos' refrain. But that doesn't mean it's a casual affair. "It's very professional," she said. "I have high expectations."

The guidebook informs Stunt Niters that each class' show must be no shorter than 25 minutes and no longer than 30, or the cast will be penalized. Rehearsal is limited to 21 hours. Costume changes are disallowed, unless they occur onstage with permission from the director. Judges score on originality, humor, story flow and group talent.

In the interest of promoting originality, four pages of the handbook list songs that have been performed at Stunt Nite over the past 20 years. Scriptwriters might want to steer clear of "Techno Jingle Bells," "Achy Breaky Heart" and "Werewolves of London."

One way to ensure originality is to have a 16-year-old write a song, as did Catherine Viner of Shelburne, who's been composing since fifth grade. She'll perform her song "Into Pieces" on voice and guitar in the junior class show.

"Stunt Nite is a magical experience," Viner said. "Even if you don't think you're good at anything, and you're nervous, you make so many friends. ... It's really special to come together with your classmates and make something you're proud of and show it to thousands of people."

Senior Aaron Grenon, 17, of Milton, said Stunt Nite is a chance to get together with kids you might not hang out with and "have a really good time."

"After a year off, I think we are all roaring and ready to win," Grenon said.

Mindful of not revealing too much about the senior show, Grenon said it's mysterious with "amazing comedy." 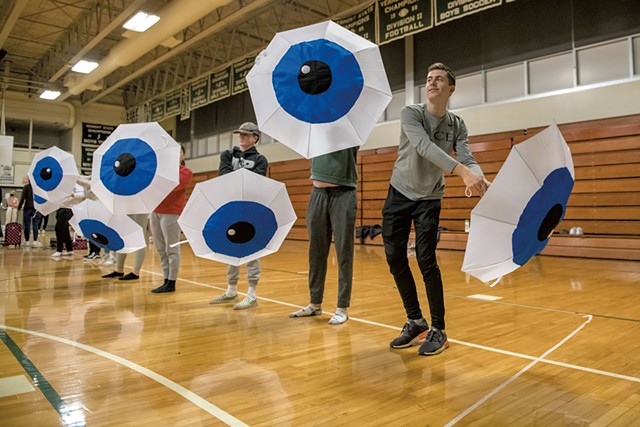 "I didn't come here because Rice was a Catholic school," Mount said one night while outside the school gym, where seniors were rehearsing. "I came here because it was a good school. Stunt Nite allowed me to break out and build new friendships."

However, he noted that the adult-written material can sometimes be "difficult for some of the students to connect with." The writers sometimes employ "tropes about high school students" to appeal to an older audience, he said.

His coach — the Stunt Nite term for the director of a show — is Clem Potvin. A 1979 graduate of Rice, Potvin is in his 14th year volunteering as a coach. He started when his son Isaac, now 29, was a first-year. Potvin has coached the current group of seniors since they were ninth graders.

"Last time I saw these kids, they were sophomores," he said. "They're taller than I am now. I think they really missed it, and they're a little more appreciative this time around."

Maybe appreciation for Stunt Nite grows over time. Tarrant, the '84 alum, thinks of his own son, Cole, who graduated from Rice in 2020 — the year without Stunt Nite.

"I probably missed that night of Stunt Nite for my son more than anything," Tarrant said. "He'll never get that back."

Mary Ellen Johnson, née Walsh, 73, of the class of '66 was winless in four Stunt Nite competitions. Her younger sister, Christine Anderson, 70, belonged to a class that triumphed four straight years.

The string of defeats hasn't tarnished Johnson's happy tap-dancing memories. Back then, each class at Rice had about 300 kids, and Stunt Nite dress rehearsal was held on Thanksgiving. Walsh remembers her mother carving turkey at the Thanksgiving dinner table and almost simultaneously sewing sequins on her daughters' costumes.

A retired kindergarten teacher at Mater Christi School in Burlington, Johnson has been a Stunt Nite judge — a role she said was far more demanding than dancing with friends — and she's watched her former students perform. But she won't be in the audience this year.

"I'm waiting for my grandson, in seventh grade, to be in it," Walsh said. "And then I'll go back."