After a Lifetime of "Cheap Art" Making, Bread and Puppet's Founder Installs a Museum Show 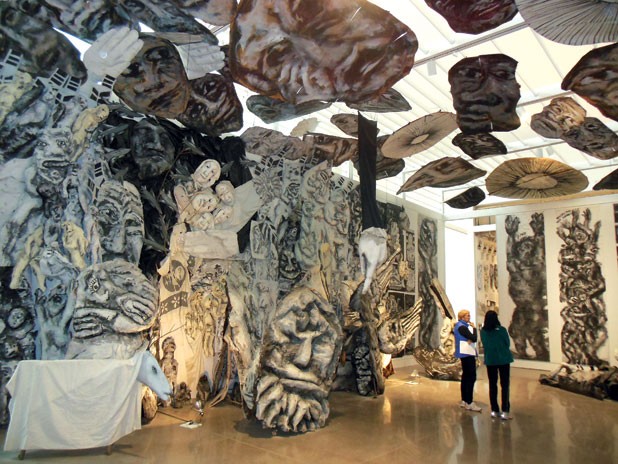 Peter Schumann’s first solo museum show coincides with the 50th anniversary of Bread and Puppet Theater, the agitprop troupe he founded on Manhattan’s Lower East Side and transported to the Northeast Kingdom of Vermont in the 1970s.

Titled “Peter Schumann: The Shatterer,” this ascetic yet exuberant exhibit is the main attraction at the newly renovated Queens Museum in New York City. It’s an apt venue. The “outer-borough” institution pulses with the energy and diversity of the city of which it’s a part, but it contains none of the glitzy excess that has come to characterize New York’s art scene. The same could be said of Schumann’s show.

Its curator, Jonathan Berger, has crammed two rooms with papier-mâché figures, inky banners, handmade books, paper lanterns, faces peering down from the ceilings, and barely comprehensible manifestos and jeremiads scrawled on walls in English and German. It’s a riotous, rollicking assemblage accompanied in the museum’s atrium by a giant mural of a beastly, flag-waving creature slinking sideways. Schumann, 79, painted it on a 40-by-100-foot wall with a brush attached to a long stick.

“The Shatterer” includes no colors, however, other than black, white and gray. For all its brio, the show has an austere, almost postapocalyptic aura. Its human, animal and indeterminate forms all appear mournful or pained.

This is Bread and Puppet’s signature style, which will be familiar to anyone who’s gone to Glover to witness or take part in the group’s performances — or to visit its own museum in the Schumanns’ barn. The Queens Museum show makes clear that the Bread and Puppet brand is very much the product of Peter Schumann’s personal vision.

The uninitiated, however, will be left uninformed. The museum has provided no texts to elucidate what viewers are seeing, or even any background material on Bread and Puppet or its founder. There is only this introductory explanation by Schumann himself: “The shatterer theme is from a) my nazi childhood when worldshattering was the law of the land and b) from Oppenheimer’s famous Bhagavad Gita quote ‘I am become death the shatterer of worlds’ at the occasion of the first atomic bomb explosion.”

The artist’s statement doesn’t explain that J. Robert Oppenheimer (1904-1967) was an American physicist who was instrumental in developing nuclear weaponry. It also fails to note that Schumann was born in Germany and lived under Nazi rule for the first 11 years of his life. He immigrated to the United States in 1961.

“The Shatterer” does make clear that Schumann’s own aesthetic is similar to that of the arte povera (poor art) movement that arose in Italy at around the same time Bread and Puppet was starting to stage its populist, politically charged pageants in New York and Vermont. Everyday materials get transformed into what Schumann calls “cheap art.” By demonstrating that beauty doesn’t have to depend on money, Bread and Puppet implicitly rebukes the propriety of both the artistic and political establishments.

But that doesn’t mean the mainstream will in turn reject Schumann’s Sturm und funk. New York Times critic Holland Cotter loved “The Shatterer,” writing in a recent review that it is the “most moving component” of the displays reinaugurating the museum. The show presents “art for one and for all, straight from the hand, right to the moral core,” Cotter declares.

Karen Papadopoulos, a visitor from Leverett, Mass., was also much impressed by the exhibit. She and her husband, Ralph Hurwitz, had come to New York to attend a wedding, but they made sure to check out Schumann’s show after reading the Times’ review. The two are longtime Bread and Puppet fans who make “an annual art pilgrimage to Glover,” Hurwitz noted.

Papadopoulos said she’s “always impressed by what Peter is able to do with ordinary objects.” Schumann, she observed, “can animate cardboard.” It was a particular pleasure to witness “The Shatterer,” Papadopoulos added, because “it represents the culmination of an artist’s life’s work.”

“The Shatterer” is on view at the Queens Museum, Flushing Meadows Corona Park in Queens, N.Y., through March 30. queensmuseum.org