In late May, Rachel Kring noticed a few fuzzy little caterpillars crawling around a table in her Hinesburg backyard. A few days later she went outside to find a dark swath of the insects clustered on the side of her house. Soon, hundreds of caterpillars were dropping from the branches of backyard trees, swinging from silken threads and feasting on leaves.

In Essex, a similar scenario was playing out at ShawnnaLea Zemanek's townhome: Just a few caterpillars on her trash and recycling bins at first, then a burst of hundreds on the exterior siding. She grabbed a hose to spray them off, but in minutes they were crawling back up. "Drowning them wasn't even working," she said.

Kring and Zemanek aren't the only ones under siege. In recent weeks, hordes of gypsy moth caterpillars have appeared on trees and backyards in the Champlain Valley. It's been 30 years since the state has seen the species in such high volume, according to state entomologist Judy Rosovsky, who works in the Agency of Agriculture, Food and Markets.

"We're in the middle of an outbreak," said Rosovsky. "There's no question about that."

She characterized the caterpillar infestation as "startling." Last fall, there were reports of large numbers of gypsy moth egg masses, but "it wasn't clear to us that it was going to be this bad, this soon," she said. Similar outbreaks have been reported recently in upstate New York, central Pennsylvania and Ontario.

Rosovsky attributes Vermont's insect explosion to the absence of a caterpillar-killing fungus called Entomophaga maimaiga. The fungus, native to Japan, was accidentally introduced to the Northeast in the late 1980s and quickly began devastating the moth. Fungal spores penetrate the moth larvae and, as the fungus grows, it devours the larvae from the inside out.

But because of a prolonged period of dry weather, the water-loving fungus is "in a hunkered-down stage" and not proliferating, Rosovsky explained. She sees a link between the gypsy moth outbreak and climate change: Since she moved to Vermont in 1985, she said, there's been a clear warming trend and an increase in hot, dry summers.

"We're in the middle of an outbreak. There's no question about that." Judy Rosovsky tweet this

Gypsy moth caterpillars — with their hairy bodies, yellow heads, and rows of red and blue spots — are "gross," said Zemanek. They're also voracious eaters that can strip trees bare. Their preferred meal is oak leaves, but they'll feast on maples, pines and other species, too, according to Josh Halman, a forest health expert in the Vermont Department of Forests, Parks and Recreation.

Defoliated trees lose the ability to photosynthesize their food, Halman explained. But that doesn't mean they're doomed to die. Since trees generate and store carbohydrates throughout the year, they have reserves they can draw from. It typically takes several years of defoliation to kill a tree. Since the caterpillars are chomping on leaves early in the growing season, there's still time for the denuded trees to grow a second flush of leaves by midsummer, Halman said.

The caterpillars' leaf binge will only last another few weeks, he said. Then they'll become pupae and transform into moths in August.

The male moths "will fly around and drive everyone crazy," while the females will lay anywhere from 600 to 1,000 eggs in tree bark in late August or early September, Rosovsky said. The egg clusters — oval-shaped beige masses with a hairy protective covering — will encase the eggs until the end of April, when they start hatching again. If homeowners spot the egg masses on their trees in the early fall, they can scrape them into a bucket of soapy water to kill them, Rosovsky said. 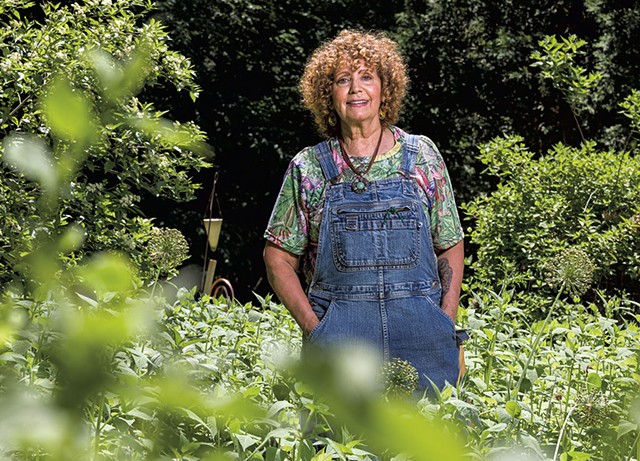 Jane Schlossberg, who lives on 84 acres that straddle the St. George/Hinesburg town line, says the caterpillars have wreaked havoc on her property. They've stripped the leaves off the oaks and draped themselves over the roof of her house. They also poop constantly. The caterpillar frass — little brownish-black pellets of chewed up leaves — sounds like rain as it falls from the trees.

Caterpillars molt five or six times in their lifespan, shaking off bristles that float in the air like feathers and land on Schlossberg's skin, causing a rash she likens to poison ivy.

In search of ammunition against the pests, Schlossberg called University of Vermont Extension entomologist Margaret Skinner. The bug expert recommended wrapping the base of the affected trees with burlap. The caterpillars now congregate there in writhing piles several inches thick, "like the 'Twilight Zone,'" Schlossberg said. She pummels them to death with a rock, which she said gives her a macabre sense of satisfaction.

Elsewhere in Hinesburg, Kring has been battling her infestation using another tactic Skinner suggested. She wrapped her tree trunks with duct tape coated in petroleum jelly. The caterpillars gather near the tape and Kring brushes them into a bucket of soapy water. She's also used a Shop-Vac to suck them up, which she said has provided entertainment for the neighbors.

"We're homeowners that are going to try to battle them, even if it's futile," Kring said. "I can't just give up." She said it seems like her dual strategies are reducing the number of caterpillars.

In Essex, Zemanek has found some relief by spraying a mixture of soapy water and vinegar around the foundation and siding of her house. She recently saw a neighbor using an electric fly zapper to kill the caterpillars. 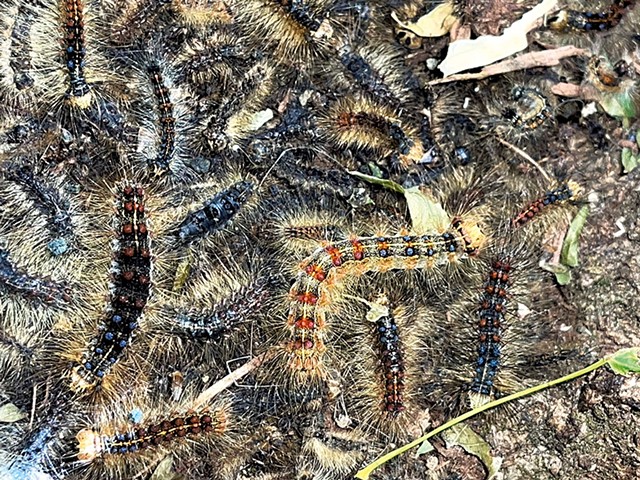 State forestry workers are preparing to assess the damage. In July, Halman will conduct aerial surveillance from a small plane to see where defoliation has occurred. Combining that information with citizen reports will provide a clearer picture of the most affected areas. Next spring, foresters will wrap burlap around trees and later count the gypsy moth egg masses that accumulate under the cloth — one clue to the probability of widespread defoliation in 2023.

Halman said it's too early to predict what's in store for next year, but the caterpillar clusters will likely return if conditions remain dry and the fungi stay dormant.

If that's the case, Rosovsky said, the state might help coordinate a spraying program for those communities hardest hit by the caterpillars; landowners would pay for it. A bacteria-based organic pesticide known as BTK (Bacillus thuringiensis var. kurstaki) could be sprayed from a crop-dusting airplane on badly affected areas of the state soon after the gypsy moth caterpillars hatch next spring. In order to work, the bacteria must be sprayed when the caterpillars are less than half an inch long, meaning it would not be effective now, Halman said. The spraying approach was used several years ago when there was an outbreak of forest tent caterpillars in northern and central Vermont, he said.

Those broader mitigation efforts are no solace for homeowners trying to manage the insects right now.

"This land is like my family. I nurture it. I love it. Seeing it go through this was a sad acceptance of what's happening," she said. "There's not much I can do except crush as many of these buggers as I can."