After 63 Years on Shelburne Road, Kaigle's Citgo Is Closing 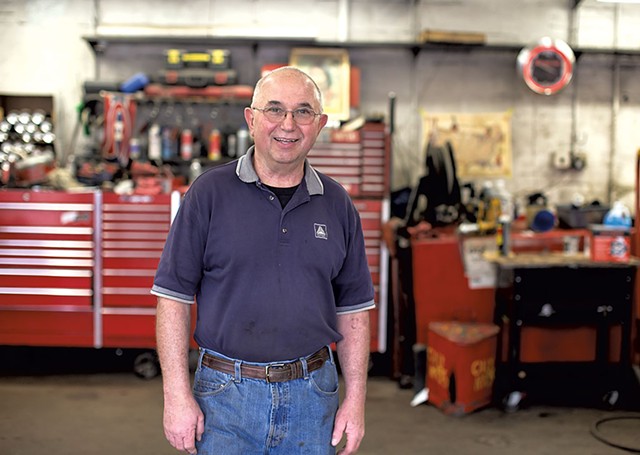 For six decades, Kaigle's Citgo has stood as a landmark on the southern border of Burlington and South Burlington. If you could somehow Marty McFly your way back to May 1956, when Armand "Freckles" Kaigle opened the gas station under the name City Service, the differences in the surrounding landscape would strike you immediately.

While the area wasn't exactly farmland, "This was the outskirts of town," says Ray Kaigle, 66, the late Freckles' son and the station's owner since 1982.

It would be another eight-plus years before Interstate 189 would open, connecting U.S. Route 7 to the interstate — and thereby inviting the outside world to Burlington, for better and worse. In the succeeding decades, nearby shopping centers on either side of Shelburne Road would be built, razed and built again. Condo complexes would pop up all around the gas station as if in some life-size game of SimCity.

A Ben Franklin five-and-dime begat Walgreens. Empire Video begat Blockbuster, which begat not just one but two chain restaurants, Chipotle Mexican Grill and Five Guys. A Sears department store begat Price Chopper, which begat the sprawling Market 32. That grocery store currently houses a Starbucks and stands directly across the street from another giant supermarket, Shaw's — and another Starbucks.

As Shelburne Road has changed, so have the cars that travel it, from Bel Airs and Corvairs to Datsun 510s and Saab 900s to Outbacks and Priuses. And the crew at Kaigle's Citgo has serviced them all.

Over the years, the modest three-bay garage and filling station on the corner of Shelburne Road and Farrell Street has remained pretty much the same, from its unassuming white façade to the lot where Christmas trees unfailingly crop up the day after Thanksgiving. Most importantly, for generations, customers could count on good treatment as they pulled up to the gas station's full-service pumps and rang the bell that spurred a friendly attendant to action — often one with the surname Kaigle.

"I've always tried to treat my customers like I would my family," Ray Kaigle says, "because that's how my dad did it, too."

But soon Kaigle and his staff will change their last air filters, rotate their last sets of tires and top off their last gas tanks. On Sunday, June 30, Kaigle's Citgo will close for good, marking the disappearance of yet another small piece of Americana and yet another family-owned business along one of Vermont's busiest arteries.

"What a tremendous loss to the community," says Joe Hagan, a Burlington-based pediatrician and longtime Kaigle's Citgo regular. "Not only is Ray a dynamite mechanic, he's kind, and his rates have always been more than generous. Plus," Hagan notes, "there's not many guys who'll work on a 1968 Karmann Ghia."

If you've driven past the gas station with any regularity in the past 30 or so years, you've probably noticed Hagan's classic Volkswagen parked there, especially in the spring when he's getting it road ready. The sporty, bright-orange coupe has a way of standing out. Hagan has been bringing the car to Kaigle for service for about three decades, along with all of his family's vehicles.

"I've always had our cars serviced with Ray," Hagan says. While his family's two Priuses generally need service at a Toyota dealer, he still brings those cars to Kaigle's for inspections and tire changes out of respect and admiration for Kaigle himself.

In one way, Hagan suggests, Kaigle was ahead of his time: "Even before there were gas stations that don't look like gas stations, places like Cumberland Farms, every gas station sold cigarettes," he says. "Ray stopped selling cigarettes a long, long time ago, because it was the right thing to do. He's just that kind of a guy."

Kaigle is slight of build but has strong, wiry forearms, corded from years of twisting wrenches. Speaking with the slight twang of a native Vermonter, he has a genial manner and the kind face to match. More than once during an interview with Seven Days, he removes his glasses to wipe away tears as he discusses closing his shop.

Kaigle prides himself on doing things the right way, a principle he says he learned from his father. "He had a 10th-grade education and didn't know the first thing about working on cars when he opened this place," Kaigle says. He notes that two other gas stations opened and closed in the building between 1953, when it was built, and 1956, when his father took over. "But he knew how to treat people, and that went a long way."

Kaigle started working for his dad in 1966, first pumping gas — which was 19 cents per gallon, he recalls — and then gradually learning how to work on cars with the shop's mechanics. Just as importantly, he learned how not to work on them.

"Dad said to always be truthful, which is what I tell my employees, too," he explains. "If there's a job that we can't do, I'm going to send you to someone that can."

Kaigle conveys genuine dismay when the topic of crooked mechanics comes up. "I've seen what some guys do to people's cars, and it's terrible," he says.

"When my father opened, there were something like 26 garages along this stretch of Shelburne Road, and everybody ate," he recalls, implying that there's always been plenty of work to go around without bilking your clientele.

That honorable, old-school philosophy has endeared Kaigle to generations of customers. Ironically, it's also the reason he's walking away.

From the time it opened, the gas station's building, pumps and gas supply were leased to Kaigle by Burlington's Champlain Oil, owned for decades by the Cairns family. Kaigle says he's always had a good and close relationship with the Cairnses. But when Waltham, Mass.-based Global Partners bought out Champlain Oil in July 2018, Kaigle says, he saw the writing on the wall.

"There is only one thing they care about: money," says Kaigle of Global. "We're not even Kaigle's to them," he continues. "We're 'Location 480.'"

He recites a litany of escalating conflicts with the corporation, from more minor grievances such as missing invoices and rude reps to bitter disputes over the terms of his lease contract and cost increases that might have put him out of business anyway.

"I've seen what happens when these big guys come in and take over," he says. "So I told them that I won't stand in their way."

When Kaigle's Citgo closes on June 30, the building will go up for lease. As of this writing, Kaigle says, no new tenant is lined up.

Vermont landscape artist Peter Fried has painted portraits of both Kaigle's and the Gulf station just south of the I-189 interchange on Shelburne Road. The painter, who was raised in Scotland, says the stations drew him because he sees them as representing an aspect of American culture that is increasingly scarce in Vermont. 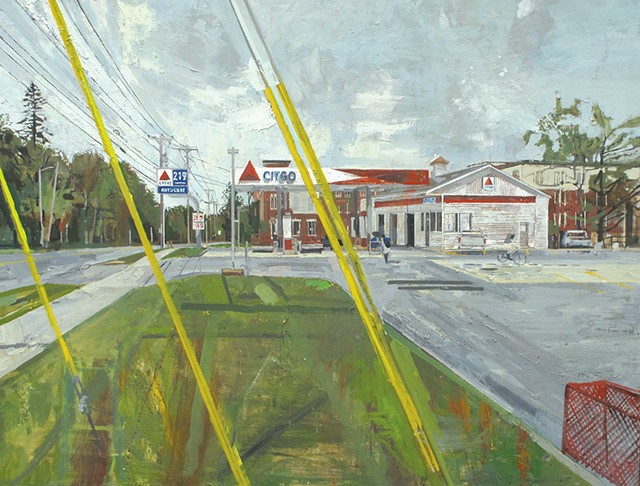 "Vermont is a very frustrating place for a European to be, because it doesn't really hit the high notes of Americana and American excess," Fried says. "You don't even allow billboards. So Kaigle's and the Gulf station are about as good as it gets.

"There's something about the ubiquitousness of gas stations that's very interesting to me," he continues. "Gas stations are a cultural litmus test, in a way, because they represent the design sense of that particular age."

In Fried's view, family businesses like Kaigle's Citgo represent both a cultural and a personal legacy. Over the years, Kaigle has employed his own children, his brothers, two sisters-in-law and one of their daughters. That's in addition to countless nonrelatives who have worked at the garage, many of whom Kaigle says he considers practically family.

"It's an incredibly commendable thing that the Kaigle family gave its labor to provide a vital service to the community," Fried says. "And that might be part of a passing era, where [now] things become more and more corporate and faceless."

After he closes his garage, Kaigle plans to take a month off to spend with family — in particular, a new granddaughter he's only seen a handful of times. The break will be long overdue for a man who works 100 hours a week, starting at 4:45 a.m. every day.

Then, of course, he'll get back to work.

Kaigle reveals that he's currently seeking a space to open a new garage in the Burlington area. If he finds one, it's a good bet his customers will follow him.

The original print version of this article was headlined "Changing Stations | After 63 years on Shelburne Road, Kaigle's Citgo is closing"