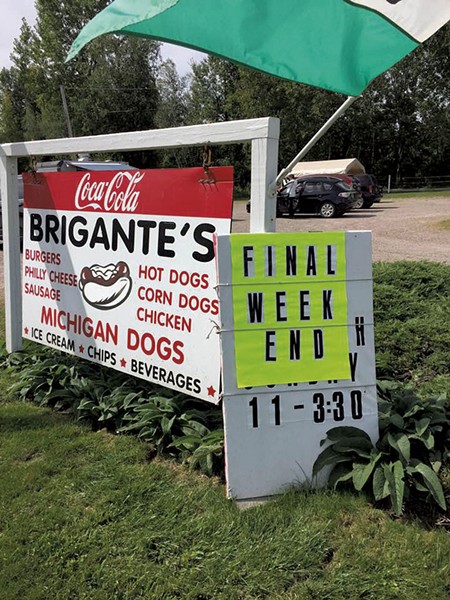 Brigante's Snack Bar closed on Sunday after 28 years in business on Severance Road in Colchester. The seasonal mobile eatery was owned and operated by Frank and Dottie Brigante, who ran it for more than half of their 53-year marriage.

"At 74, we had to evaluate if we were able to continue it," Frank Brigante told Seven Days on Monday. "This past summer was probably the toughest one of all. With the heat in July and August, we decided it was time to take another direction in our lives and spend a few years able to enjoy summers."

For its first 15 years in business, the stand was open six days a week from 11 a.m. to 8 p.m.; after that, the Brigantes cut their hours to part time and kept the snack bar open Wednesday through Sunday from 11 a.m. to 3 p.m.

"We wanted to be there ourselves; we made that a key part," Brigante said. "One of the driving forces behind keeping going was our customers. They became friends as much as customers. We had a nice steady following, and we just love them to death."

Brigante's used local produce, including tomatoes and peppers grown by Frank's brothers Cosimo and John. Packets of Brigante's Michigan seasoning were for sale at the stand and several local stores. Brigante hopes to continue selling the spice blend; beyond that, he is unsure what the future holds.

The original print version of this article was headlined "Final Season"

The Magnificent 7: Must See, Must Do, October 29 to November 4