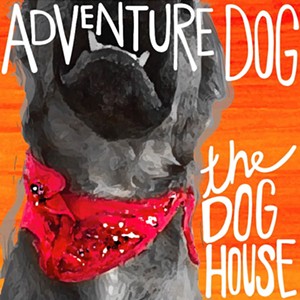 UK trip-hop legends Massive Attack recently announced that their 1998 masterpiece Mezzanine would soon be available as a can of spray paint. Seriously. Apparently, a crack team of Swiss scientists figured out how to translate the album's digital bitstream into strands of DNA stored in something called TurboBeads. Nearly a million nano-copies of the record are then housed in chic, limited-edition aerosol spray cans. Welcome to the future.

But the question is: Did Phish encode Junta, Lawn Boy and A Picture of Nectar to DNA a long time ago? And did they rig up some kind of secret misting station at the tippy-top of the University of Vermont's Ira Allen Chapel? Are microscopic copies of "Golgi Apparatus" and "Stash" spraying out over campus, saturating and infiltrating the minds and creative spirits of UVM's young musicians like some kind of psychedelic chem trail? Can you think of a better explanation for Groovy UV's never-ending stream of jam (and jam-adjacent) bands?

Whether it's merely a cultural legacy or something more sci-fi, bands like funk-rock five-piece Adventure Dog continue to emerge from the campus on the hill. And they all kinda sound like Phish. But to be fair, this particular group doesn't sound too much like them. Protracted jams are largely excluded from its five-track debut EP, The Dog House.

Earlier this year, Adventure Dog picked up some steam. The recent grads won UVM's Battle of the Bands — beating out soon-to-be superstar Princess Nostalgia and others in the final showdown. They also appeared at two high-profile music festivals (Waking Windows and Tumble Down) and have expanded their touring radius well beyond Burlington's downtown core.

Singer Andrew Tonra's vocals are cool, smooth and seductive. His intonations, on "Calamari" and elsewhere, are charismatic yet slightly staid. He sounds great, but could he be more adventurous?

Opening track "No!" is essentially one long, unobtrusive groove. A spaced-out synth careens over a grounded bed of keys and guitar. Things come to a boil when horns arrive, but they quickly return to a simmer.

"Serenade Yourself" is basically a déjà vu of "No!" "Dog House" showcases standout work from trumpeter Adam Schini and saxophonist Derek Dykstra. "Cottontail" is straight-ahead funk with heavy wah on guitar — yet it heads back to the Phish tank with a harmonious choral hook.

For a band with "adventure" in its name, Adventure Dog play it pretty safe on The Dog House. And you should have no trouble picking up on their music's genetic lineage.

The Dog House is available at adventuredogmusic.bandcamp.com. Adventure Dog perform on Wednesday, November 14, at Nectar's in Burlington.