Jacques Moninga's favorite English language instructor is Alisha Ivelich. The Congolese native has never talked to her nor met her, but he said he's learned a lot from watching her EnglishClass101 videos on YouTube.

"Yes, I can say [hers are] the best," said Moninga, who also speaks French, Kibembe, Lingala and Swahili.

He used to watch the YouTube videos on his smartphone. But since a friend gave him her old laptop, he has relished watching on a bigger screen. When the polyglot has questions, he writes them down and waits until Monday evenings to discuss them with his other English teacher, Raichle Farrelly.

For the last couple of years, Farrelly, assistant professor of applied linguistics at Saint Michael's College, has been teaching English to adult students with refugee backgrounds. While many organizations provide similar community English classes, Farrelly's offering on Monday evenings in Winooski's Champlain Mill is unique because she required that every student be a Swahili speaker.

"I speak enough Swahili to clarify things and also to establish relations," said the teacher, who cofounded an NGO that provides access to education for children in remote villages in Tanzania.

The use of a first language in the English language classroom is an important tool for clarification, Farrelly explained. Furthermore, if the students chat among themselves in Swahili, everyone can be part of the conversation.

About two months ago, Farrelly added a new component to her class: tech education. Her students already had smartphones and were proficient with WhatsApp, the messaging and voice-over-internet-protocol service, which allows them to connect with relatives still in refugee camps in Tanzania.

But digital literacy is more than simply using social media and apps. Most of Farrelly's students don't have a laptop or know how to use one.

Being technologically literate plays a major role in finding jobs, developing professional skills and paving the way for upward mobility. The Vermont Technology Alliance published a report in 2016 stating that nearly every job and industry in the state requires some use of tech skills or tools. Tech employment, the organization wrote, was projected to grow at an annual rate of 7.5 percent from 2014 through 2022.

Some adult refugees in Vermont not only have to overcome the language barrier, they also have to address the skills gap as they seek to integrate into the workforce.

While young newcomers get a lot of support from schools and other service providers, their parents are the "sacrificed generation," noted Farrelly. They perform unskilled and low-paying jobs and pin their hopes for upward mobility on their children.

Her students currently hold jobs that don't require that they be tech savvy. They're housekeepers, custodians or production workers. They're also working so much that they don't have time to learn enough English, Farrelly noted. Some are not even literate in their native language.

While it's unlikely that most of her students will need tech skills at their workplaces, Farrelly wants them to have access to digital literacy education. At the very least, digital proficiency can make mundane tasks easier.

For instance, one of her students waited for a year before moving into a new residence, Farrelly said. The woman had to depend on her case manager to search for available housing. Had the student been computer literate, Farrelly suggested, she would have been able to check listings herself and possibly move out sooner. Similarly, parents could learn more about their children's educations if they knew how to navigate school websites.

"I think if they can feel more comfortable with technology, they can access more information," said the educator.

Each week, Bjorn Norstrom from Technology 4 Tomorrow brings laptops to students in Farrelly's class. When the nonprofit was founded in 2012, it focused on serving the senior citizen community.

But since 2015, Technology 4 Tomorrow has been a partner of Parent University, a program that familiarizes parents, particularly those of immigrant or refugee backgrounds, with the Burlington School District and their children's education. 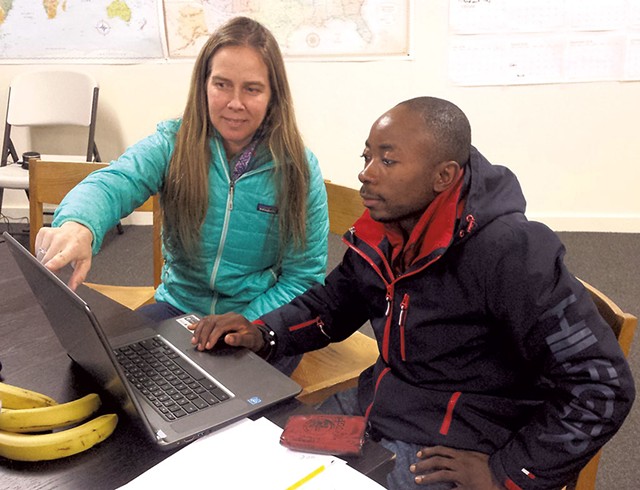 When Norstrom first came, he and Farrelly helped the students create their own Gmail accounts, practice sending and receiving emails, and practice touch-typing. One student recoiled and didn't want to touch the laptop, said Farrelly, who recently joined the nonprofit's board. But 20 minutes later, he was "pecking away" at the keyboard.

"I was surprised when [Norstrom] came," recalled Moninga, 24, whose tech skills had previously been limited to using Facebook and WhatsApp.

When he got home that night, Moninga didn't sleep. He was hooked on touch-typing and kept practicing. These days, he sometimes has a typing competition with his teen cousin. When he uses his laptop, he feels as though he's working in an office, Moninga said. He also reads news from the internet and has improved his Google search skills.

"I'm a little bit good," said Moninga, "because I can try to find something and see the answers."

Last week, Farrelly convinced him to apply for a seasonal job online with UPS. Moninga hesitated initially because he didn't think he spoke enough English.

"You've got that down," said Farrelly, reassuring him.

While completing the application, he used Google to look up the address of his former employer and picked up keyboard shortcut tips from his teacher.

Born in the Democratic Republic of Congo, Moninga and his family fled an armed conflict in their country and lived in Nyarugusu Camp in northwestern Tanzania for 17 years. After completing his secondary school education in the camp, he worked as a social worker there for three years. Moninga, his grandmother, and his aunt and her children resettled in Vermont in 2016.

Though he would like to resume his education full time, his family — both in Vermont and in Tanzania — are counting on him to support them financially. He currently works at a clothing manufacturer. For now, he has to be content with attending Farrelly's weekly class and watching YouTube videos. But Moninga hopes to be able to take his GED, attend college and start an import-export business. He believes the tech education will help him reach his goal.

Recently, tech innovations have surged in response to burgeoning global refugee populations. New apps help refugees with their daily activities while in the camps, and some companies offer training for newcomers. For instance, the Intel Foundation has invested in a job-training program for refugees in Germany. Norstrom hopes that local employers will be just as creative in developing the New American workforce here.

But the refugee populations are heterogeneous. Programs such as those offered by Intel benefit a minority: the educated and highly skilled. In addition, there's a "palpable digital divide between refugees with access to apps, websites and internet access, and those without," wrote Ben Hounsell, a Kenya-based senior researcher at the Samuel Hall think tank, in a story on the Refugees Deeply news site last year.

"While 30 percent of the global refugee population lives in sub-Saharan Africa, compared to 14 percent in Europe," wrote Hounsell, "four out of the top seven countries building tech solutions for refugees are in Europe, with Germany, Greece, the UK and France leading the way."

Still, at least one local company welcomes Technology 4 Tomorrow's mission to equip newcomers with tech know-how. The Vermont Employment Agency helps businesses hire employees. Sixty percent of its hirees are foreign born and find jobs in the manufacturing and warehousing sectors, said John Surujiu, director of marketing and business development. Most are already proficient in using Facebook, WhatsApp and Viber, another messaging and calling app.

"I'd be more than happy to give some feedback," said Surujiu, "on how we can help the community as an employer."

For instance, instead of spreading tech classes over weeks, it's better to organize a weekend intensive course, he advised. That way, employees don't have to make the difficult choice between gaining professional development skills and missing work and losing income. And the development of an app or a tutorial video on tax forms would be most useful, Surujiu noted. In light of Vermont's tight labor market, companies have to do more to train and retain their employees, he added.

Farrelly noted that she will continue to incorporate tech education in her classes, even though doing so reduces the time available for teaching English.

For some students, the typing practice gives them a break from the daily stress and worries of adapting to life in the U.S. It might take decades for Farrelly's students to master the language. But in typing class, they get immediate feedback on how they're doing and gain confidence when they see themselves improve within 20 minutes.

"I think they enjoy it," said Farrelly.