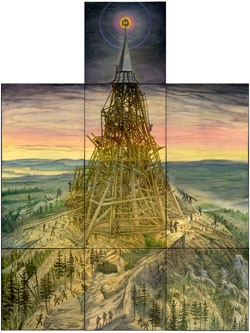 Peter Seward is painting modern-day icons, but they don’t have anything to do with religion. Except, perhaps, in the eyes of viewers who think technology is God. The Lake Placid-based artist’s exhibit, “The Tower of Babel,” opened at the Westport Depot Theatre last Saturday. As his artworks show, Seward has found a way to link the history of his beloved Adirondack Park with the contemporary — and contentious — proliferation of wireless communication towers throughout the area.

The historical component of the show revolves around Verplanck Colvin (1847-1920), a sort of “Renaissance man,” as Seward calls him, who put his training as an attorney and topographical engineer to work in the creation of upstate New York’s Forest Preserve and Adirondack Park. An avid climber and explorer, Colvin “discovered” Lake Tear-of-the-Clouds, the source of the Hudson River, and recognized its ecological importance. With 19th-century technology, the Albany native and his surveying parties determined the altitudes of the highest peaks in the ’dacks, and in doing so trampled down a lot of mountaintop trees, Seward says. Those bare peaks make for good viewing for anyone who reaches them, but they also stand as permanent reminders of the conflict between nature and human “progress.”

Seward’s “21st-century landscapes” pick up on that paradox in paintings of trees, church spires and other tall structures — in all of which cellular towers are “hidden.” These feeble disguises “tickle him,” says the 46-year-old artist, who admits — in a cellphone call — that he feels conflicted about whether such devices should exist. Proponents argue that at least the towers look better semi-obscured than right out in the open. In the Adirondack region as in Vermont, Seward notes, the matter is far from settled.

His paintings — oil on canvas or panel, or mounted on Masonite — often appear as vertical diptychs or triptychs to connote the idea that the actual towers can be “segmented,” he says. Seward also tends to place the featured tower dead center on the picture plane, literally towering over the rest of the depicted landscape. Examples: a “Frankenpine” (2006) in the forest; an enormous “Stealth Flagpole”(2007) jutting into the blue sky and dwarfing the suburban-style homes below. This composition strategy seems to give the towers an iconic status, which some viewers have seen as a (possibly ironic) religious reference. One might point out, too, the towers’ undeniably phallic shape — often a symbol of human hegemony. The painter neither encourages nor discourages any meanings; he prefers to let viewers interpret the images as they see fit.

“When an artist paints a painting of someone who is not classically beautiful, they find the beauty within it,” Seward offers. “I’m looking for something more complicated than a negative reaction.”

Seward’s biggest painting, “The Tower of Babel,” is composed of seven panels and measures 3 by 4 feet. The namesake of the Westport show, it features “an absurdly large tower,” he says. And in this case, there is a biblical reference. Besides evoking the idea of communication in different languages, Seward jokes, “It plays into our babbling on the phone.”

Seward was a commercial artist at an apparel company in New York City for 16 years before he and his wife moved upstate four years ago. Since finding a home just outside Lake Placid, he’s become active in area arts organizations — including holding a board seat on the Westport-based Arts Council for the Northern Adirondacks — and is involved in the lively “project space” Bluseed Studios in Saranac Lake.

Seward also seems to have found his focus. “I could have painted straightforward landscape paintings,” he says, “but I was really fishing for a theme that had to do with culture and nature, and the idea of ‘footprint’ and wilderness.”

Chances are, he won’t run out of subject matter anytime soon. In one of his new paintings in the Westport show, the Adirondacks hero Verplanck Colvin stands atop a mountain, literally and figuratively surveying the land. In the distance — read: the future — there’s a wind farm.