Adirondack Training Pays Off for Athletes and Lake Placid 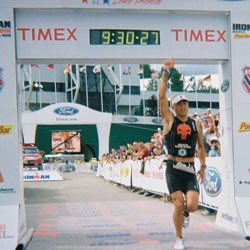 Logan Franks learned to swim two years ago in a Baghdad pool that used to be the private property of Saddam Hussein. For the past three months, the 22-year-old Marine reservist from Plattsburgh has been plying the waters of Lake Placid’s Mirror Lake in preparation for his first competitive triathlon.

The grueling training paid off last Sunday. Franks finished first in the 18- to 24-year-old group and 11th overall in a field of more than 2600 racers who took part in the Lake Placid Ironman event. He completed the 2.4-mile swim, the 112-mile bike ride and the full 26.2-mile marathon in nine hours, 20 minutes and 27 seconds.

“There’s nothing else in the world I’ve ever wanted to do more than this,” Franks said following a performance that stunned even hardcore Ironmen — and Ironwomen; about 400 females competed on Sunday. “It’s amazing what the human body can do if you push its limits.” The overall men’s winner, 27-year-old Ben Hoffman of Durango, Colo., had to be carried off to the medical tent for treatment.

Any Ironman contest pushes the human body beyond its limits, but the Lake Placid edition offers special tortures. The biking leg includes an agonizingly long climb with an elevation gain of about 1800 feet, while the second half of a marathon course apparently designed by sadists is almost entirely uphill.

It’s the killer nature of the course that lures thousands of triathletes from around the country to train in this village of 2600 year-round residents, famous for the Winter Olympics hosted there in 1932 and 1980. “It’s seen as one of the most desirable destinations for training because of its scenic aspects and the challenges it presents,” says Jon Lundin, a spokesman for the Olympic Regional Development Authority. “They start coming as soon as the ice is out of Mirror Lake. They’re swimming in it by April.”

Lake Placid ranks among the top five training sites in the United States, says Shane Facteau, an Ironman organizer. Boulder, San Diego and Austin are also on the list. The Ironman competition is “hugely important for this area,” says Facteau, who lived in Lake Placid for seven years. “The weekends leading up to it, the streets here are just thronged with visitors.”

The Ironman competition gives the local economy a $10-million-plus jolt, according to a State University of New York study. That’s about three times as much as Burlington’s KeyBank Vermont City Marathon. Lake Placid’s own marathon — in June — brings in about $1 million. The dollar differences are directly attributable to how long the athletes — and their supporters — stay in town. In every way, the Ironman is a long, drawn-out affair.

The area’s endurance events, as well as winter competitions at the Olympic facilities, have less tangible benefits, too, says Jim McKenna, president of the Lake Placid/Essex County Convention and Visitors Bureau. “It all makes a big impression on our youth,” he notes. “A number of them have embraced the races, and it makes them want to have healthy lifestyles.”

McKenna and other Lake Placid boosters rely increasingly on the Ironman, now in its 12th year, as the key element in their marketing repertoire. “We’re no longer tied to the Olympics of 30 years ago,” McKenna explains. “We’re trying to appeal to today’s market on the basis of what they know and find exciting.”

Lake Placid does remain associated with the Olympics in the minds of many wannabe medalists. Weekend workout stars can’t upgrade to the Lake Placid Olympic Training Center, however. It’s reserved for U.S. athletes and teams connected to the Pan American Games, the Paralympics and the Summer or Winter Olympics, Lundin says. The center’s 220 beds are nonetheless 60 percent occupied on average year round, he notes. Thirty-two of the 37 Americans who medaled in Vancouver trained there at one time.

But it’s the Adirondack terrain — open to everyone — that serves as Lake Placid’s main attraction for amateur athletes. Swimmers and kayakers love Mirror Lake in the heart of the village because motorized craft are banned from its glassy waters. Biking routes offer views of landmarks such as the Olympic ski jumps and Whiteface Mountain, where the downhill races took place in 1932 and 1980. Runners with an interest in American history can head for the John Brown Farm State Historic Site 2.2 miles from the center of Lake Placid and then rack up more miles on the trails of the farmstead where the militant abolitionist lived with scores of runaway slaves.

For the serious set, Logan Franks suggests biking from Lake Placid to Plattsburgh and back, which makes for a nice 110-mile warm-up. That can be followed by a 1.2-mile once-around-the-course swim in Mirror Lake and maybe a run along Sentinel Road, which is part of the marathon route, for six miles in each direction.

That’s the regimen Franks followed three times a week in the months leading up to Ironman. It wasn’t easy finding the time for all that training, given that he works at Price Chopper in Plattsburgh and is a full-time student at the local campus of the State University of New York. But he encourages would-be Ironpersons to give it a try. “Anyone can do what I did,” he insists, “as long as they put their mind to it.”

Franks, who qualified on Sunday for the Ironman World Championship in Hawaii, makes a good point. Competitors in the Lake Placid event included a 71-year-old retiree and several 18-year-olds — the youngest people permitted to take part.

The most stirring sight of all, however, may have been the few tandem bikers making their way along a course crowded with single riders. Ironman rules allow blind persons to ride as the rear partner on a tandem and to run the marathon with a friend holding their hand.