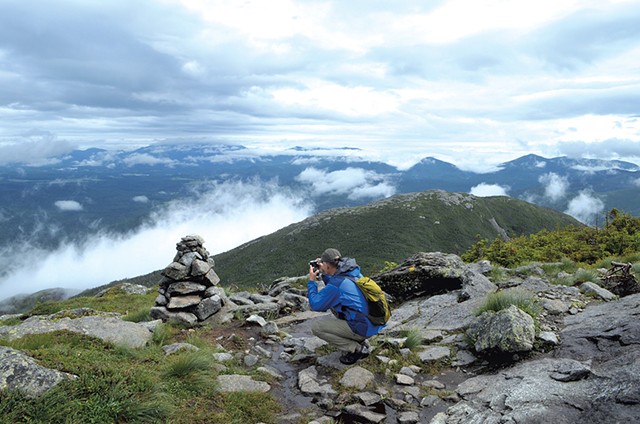 Five days a week, Ryan Nerp tromps up some of New York's tallest mountains. He'll spend hours on top, oftentimes talking with dozens of hikers, before heading back down.

It's all in a day's work for Nerp, who is employed as an Adirondack Mountains summit steward. Just as with U.S. Postal Service workers, "neither snow nor rain nor heat" stops these outdoor educators; in the summer, their office is the Adirondacks.

"You get to see the mountains in all weather, all conditions," says Nerp. "Along with that, you get to find all kinds of interesting plants and see some animals from time to time. It's just really nice being out here."

It's not always glamorous. On July 14, Nerp climbed up Algonquin Peak, the state's second-tallest mountain (elevation 5,114 feet) for the 12th time this summer. He reached the top just before 9:30 a.m. and was greeted by 30-mile wind gusts, rain, cool temperatures and the threat of afternoon thunderstorms. Nerp routinely gets hit with hail, rain, fog — he even saw patches of snow just weeks ago.

"It is hard on your body after a while," says the 32-year-old, who is stewarding for his second summer. "Right about this past week, I feel like I've almost hit a wall where, after a couple miles in, I just get very, very tired," Nerp concedes. "So I just have to power through it. I was able to make it last year, so I know I'll be able to make it this year."

At the Algonquin Peak summit on a recent Friday, he puts on a down jacket, zips up his raincoat, hunkers down behind a boulder and waits for visitors to arrive. By noon, Nerp will have spoken with about 30 people — not bad, he says, considering the weather. He generally gives hikers time to drink some water, eat a snack and enjoy the view before he approaches and launches into his spiel.

Nerp starts by pleading with hikers to stay off the alpine vegetation. While it sounds like something a grumpy old man would yell at neighborhood kids, the mixture of grasses and plants found at higher elevations is incredibly fragile and rare. 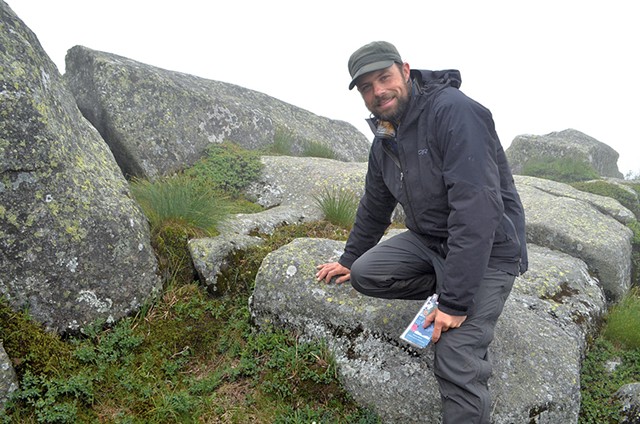 Only about 173 acres of alpine habitat exists in the entire Adirondack Park, spread over 21 peaks; some argue there's even less. More than half of it is found on the two highest mountains, Marcy and Algonquin. The grasses, with names like Boott's Rattlesnake-root and Deer's Hair Sedge, are remnants from the last ice age and once covered the entire Northeast. But 10,000 years ago, as temperatures warmed and ice sheets retreated, trees and forest plants took hold, crowding out the alpine vegetation. It survived in just the harshest, wettest and coldest environments remaining: very tall mountain peaks. A single step on this grass can kill it, according to Nerp.

So, who really cares? Why does it matter if these tiny grasses disappear?

Along with the importance of maintaining biodiversity, Goren says the plants can teach humans "about how to adapt and how to live in a really challenging ecosystem — and how to survive."

"It's part of our heritage ... This is the last remaining vestige of this ecosystem," she says. "It's a living history museum for us, so it's an opportunity to step back in time 10,000 years to what everything looked like then."

Acting as human keep-off-the-grass signs isn't the stewards' only purpose. Nerp carries up a pack full of maps and photos and a first-aid kit, along with a radio looped into the forest rangers' dispatch system. He's not law enforcement, but Nerp will give advice on backcountry etiquette and rules and sometimes assist in the event of a medical emergency or injury.

He also acts as a researcher. He jots down daily wind speeds and temperatures and keeps track of vegetation growth to help scientists study the effects of climate change on the alpine summits. On his way up each day, Nerp will often do some trail work or stop to chat with hikers, helping them if needed. He keeps panoramic pictures of surrounding mountains so he can point out different landmarks.

Nerp and the other stewards also routinely deploy to Colden and Wright mountains and try to hit each of the 21 peaks with alpine vegetation at least once per season. In the last few years, a steward has been stationed every weekend on Cascade Mountain. Located just off Route 73 in Keene, N.Y., the mountain is one of the most accessible — and easiest to climb — of New York's 46 peaks that are more than 4,000 feet high. 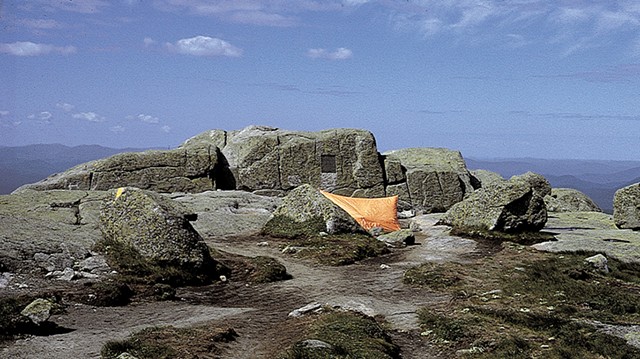 Cascade has some of the most popular trails in all of the Adirondacks. Last summer alone, stewards there spoke with 665 hikers on a single day, compared to about 100 on a busy day atop Marcy or Algonquin, according to Kayla White, the Adirondack Mountain Club's summit steward coordinator.

While there's no alpine vegetation on Cascade, its popularity makes it a prime place for stewards to educate hikers, some of whom are in the Adirondacks for the first time.

"That's definitely a lot of people, and it just keeps getting higher and higher," says White. "The last six years, we've seen this exponential growth in people we've been talking to on the summit."

The increasing number of visitors — stewards spoke to 36,355 hikers last year, compared to approximately 15,000 in 2006 — has some worried about trail overuse in the Adirondacks. (See related story on page 38.) Stewards say it just makes their job all the more important.

"It's a twofold thing: We want to protect the resource, but we want to make sure everybody's able to enjoy these special places," Goren says.

The summit steward program is backed and paid for by a patchwork of organizations. The Adirondack Mountain Club, the park's largest education and advocacy nonprofit, takes the lead, with support from the state Department of Environmental Conservation and the Adirondack chapter of the Nature Conservancy, which helped launch the program some 28 years ago.

"We all worked together to develop this program, which, at the time, was a very novel approach to raise awareness and change hiker behavior," says Connie Prickett, director of communications and community engagement for the Nature Conservancy's Adirondack chapter. "And it's clearly working. I hear from the summit stewards a lot of times [that] people will see the summit steward, before they even talk to them, and say, 'I know, I know. I'm not stepping on the plants. I'm staying on the rock!'"

Smaller groups, such as the ADKhighpeaks Foundation, have also gotten involved. President Jack Coleman says the foundation grew from an online hiker message board created in the early 2000s. The forum's reach has decreased with the advent of Facebook, but its members started the foundation in 2008 in honor of forum cofounder Neil Luckhurst's son, Dominic, who was killed in an avalanche in the Canadian Rockies.

Every year since 2011, the foundation has sponsored a steward at Cascade, according to Coleman, who volunteers as a steward several weekends each summer.

"I've seen the results of the work over the years and how we've managed to reduce trampling on the peaks," he says. "Knowing that the program is working through education and the trail work we do is really what has excited me the most." 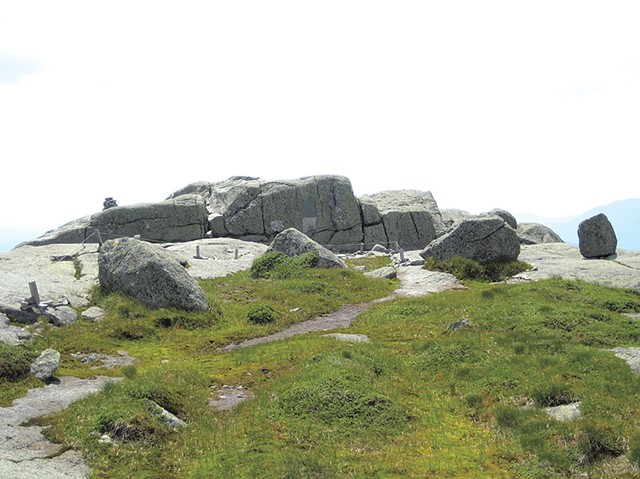 The Adirondack program is modeled after an idea first implemented in Vermont. The Green Mountain Club has for decades employed "caretakers" who educate hikers on Camel's Hump, Mount Mansfield and Mount Abraham, along with heavily trafficked trails to places such as Sterling Pond, says GMC executive director Mike DeBonis.

"I think it's a great model," he says. "The folks who started this realized it's a good way to manage a public resource and manage fragile resources up high."

And the concept is taking off. Other organizations have posted stewards on Adirondack mountains with fire towers on their summits, such as Hurricane and Poke-O-Moonshine. At popular boat launches, the Adirondack Watershed Institute sponsors watershed stewards who provide information and warn users about invasive aquatic species.

The different iterations, Goren says, indicate that the stewardship program is an "environmental success story."

"Back 28 years ago, when the summit steward program started, it seemed like this completely intractable problem," she adds. "The very rarest plants in the state were being hiked off the mountain, and there was nothing that could be done to save them. And it's not a big change that we ask hikers to make ... [but] the cumulative effect of those very small and simple individual actions has led to not just the salvation of this ecosystem but its recovery."

Back on top of Algonquin, Nerp continues to greet hikers. He talks with Steve Humphry, a retired lawyer from California visiting the Adirondacks for the first time, and with Connecticut couple Ashley Jarzombek and Sam Agnello, who have hiked up with their dog, Sulley.

Next, Nerp greets Gustavo Alzate, explains the ecosystem and directs Alzate to the trail for his next destination, a nearby peak called Iroquois.

"Thank you for the information, and thank you for all that you do," the Colombia native says to Nerp. "We need more programs like this. For all the terrible things we do to this planet, every little bit helps."

Then Alzate and his hiking companions slip off into the mist, while Nerp remains on top, waiting for the next group to arrive.

The original print version of this article was headlined "Peak Performers"