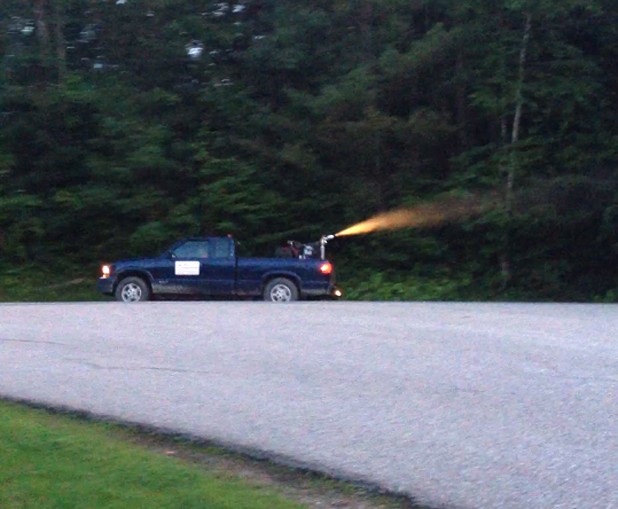 When the Vermont Department of Health announced last week that mosquitoes trapped in Leicester had tested positive for West Nile Virus, Gary Meffe had good reason to feel vindicated.

Meffe chairs the Brandon-Leicester-Salisbury-Goshen (BLSG) Insect Control District, one of three Vermont mosquito districts and the only one that routinely applies a chemical pesticide called malathion. In 2012, an even more serious mosquito-borne disease, Eastern equine encephalitis, killed two Vermonters, one from Sudbury and another from Brandon.

The BLSG mosquito-control program hasn’t generated much controversy in its 20 years. But recently, some Addison County residents have voiced concerns that the mosquito district is spraying pesticide too close to homes, gardens and some bodies of water. Fueling that concern was a June 4 fish die-off in Fern Lake, which some people theorized was caused by malathion exposure. According to the National Pesticide Information Center, malathion is considered “highly toxic” to bees, some fish and other aquatic creatures.

Zak Saxe of Leiceister lives at the north end of Fern Lake and first reported the June 4 fish kill to the Vermont Department of Fish & Wildlife; Vermont Fish & Wildlife later identified eight different species among the dozens of dead fish found floating and washed up on the beach.

But Saxe’s complaints about the mosquito-eradication program go back several years. “For a while they were coming right down my driveway and bombing my garden with pesticides,” says Saxe, who responded by putting his three-acre property on a BLSG “no-spray” list.

Against his wishes, his organic vegetable gardens still got sprayed periodically for several months thereafter. The mosquito treatment ceased only after someone at BLSG told him to erect signs along the road directing spray-truck drivers to avoid his property.

Saxes claims that when he confronted the drivers to complain, they couldn’t even tell him what chemical they were using. “That stuff would drift inside my windows unless my windows were up,” he says.

Saxe suggests that such blunders are indicative of the “loosey-goosey” nature of BLSG operations. While he believes the people working there are fair and well intentioned, he says the pesticide applicators need better oversight from the state. All work part-time and have only limited training in the handling of hazardous chemicals.

The pesticide is applied using a fogger mounted in the bed of a pickup truck, which drives up and down roads and driveways spraying an ultra-fine mist on both public and private property. By law, the truck is required to stay at least 100 feet away from all bodies of water, and BLSG claims it keeps at least 150 away. But several residents tell Seven Days they’ve seen trucks spraying closer than 100 feet from shore.

Saxe claims he was once standing in Fern Lake when a spray truck drove by, “and you can feel the pesticide touch your eyeballs. It makes your eyes sting. And that’s standing in the water!”

Lesley Wright has reported problems on her 100-acre organic farm, Stoney Lonesome Farm in Leicester, where she raises garlic, pumpkin and asparagus, as well as llamas, chickens and sheep. Wright also put her property on the BLSG no-spray list but still got sprayed, an incident she had to report to her organic-certifying agency. Wright worries that if the practice persists, she could lose her organic certification.

Wright says the public isn’t alerted before spraying commences, leaving no time to bring pets and livestock inside or to empty their water bowls. She has also had two bee colonies die off in recent years and suspects that malathion — which has a half life in soil and water of up to 17 days — may have been a contributing factor.

Wright says she understands the desire of some neighbors to treat the area, which is known for being one of the worst in Vermont for mosquitoes. But she worries about the “human toll” pesticides are taking. Noting that some international studies have linked malathion to shorter gestational periods in humans, she’d like to see the program “more skewed toward the green” before they “blanket the area” with a toxic chemical.

“If you stand at the fishing access on the night they’re spraying, you hear the trucks going up and down roads and driveways,” she adds. “You just don’t want to go swimming in there the next day.”

Meffe, the mosquito district chairman, acknowledges that pesticide applicators have made errors in the past. However, since the fish kill occurred, he says, the district has renewed its efforts to keep the trucks well away from any water and the properties of people who don’t want the treatment. Meffe can’t say exactly how many people are on that no-spray list but estimates it’s no more than a couple dozen.

“I come into this from the perspective of an environmentalist,” says Meffe, who notes that he was once the editor of the international scientific journal Conservation Biology. “Personally, I’m not out to spray the whole world with pesticides.”

Meffe explains that it would be impractical to alert the public whenever the spray trucks go out in the evening because they’re not on any set schedule. The BLSG district maintains a mosquito hotline that residents can call to request a treatment. It’s free for any outdoor event, including weddings, barbecues and parades. Lately, Meffe says, the phone has been ringing off the hook.

He emphasizes that state law prohibits the district from spraying the same property more than once every five days.

Part of the problem, he says, is that BLSG has had a lot of spray-truck driver turnover. It doesn’t require very rigorous training, he acknowledges — only a half-day course or “taking some books home to study,” then passing a written exam.

“And, it’s not a very attractive gig either,” he adds, noting that drivers typically work from 8:30 p.m. until midnight, driving rural, unpaved roads and spraying a pesticide for $15 an hour. “It’s more of a community service. No one’s getting rich doing this. And no one says, ‘When I grow up I want to drive a pesticide truck.’”

But Meffe, who’s also a retired fish ecologist and former college professor, downplays the likelihood that malathion played a role in the June 4 die-off. BLSG has been using malathion-based pesticides for more than two decades without incident, he says, suggesting the fish died from natural causes.

“I’m very confident that that fish kill was due to spawning stress and high temperatures,” he says. Nevertheless, he acknowledges that no tests of the water or dead fish were done to confirm that theory. As a result, he says, “I’d be the first one who’d want to know if we need to change our practices.”

Evidently, BLSG filed its official report of the fish kill with the wrong agency — Fish & Wildlife instead of the Vermont Agency of Agriculture, Food & Markets, which issues its pesticide permit and has the capability to test the fish and water.

“We don’t know and at this point, we may never know,” confirms Matthew Probasco, an environmental analyst with the state Department of Environmental Conservation. “There was a window of opportunity to get a sample, but that window closed.”

Probasco says the Ag Agency analyst who would have tested for malathion was on vacation when the die-off occurred. Upon his return, Probasco says, the analyst was tied up in Rutland County, where a bed bug exterminator had sprayed a banned pesticide.

For his part, Meffe says that while he respects the “minority of residents” who don’t want to get sprayed, the vast majority of residents do want the treatment, as evidenced by the fact that four towns are willing to pay a combined total of $57,000 for it. He notes that after the district suspended spraying for just one night after the recent fish kill, the board got an earful from residents. The mosquito problem is so bad this year, he adds, “Most people here are just begging to be sprayed.”