Review of Young of the Year by Sydney Lea 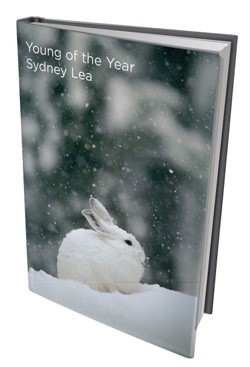 Lea never spares himself, nor are these sentimental poems.

Same as novels and movies, poems have plots: Boy meets girl. Boy loses girl. Boy finds girl again. But now and then, we need a new plot, and in Sydney Lea’s ninth collection of poems, we get a good one. Nearly every poem in Young of the Year has the same story line: Man meets old age. Man is momentarily horrified. Man blesses the world.

Sydney Lea is Vermont’s recently named poet laureate. His collection shows impeccable timing, now that baby boomers are finally mature enough to start feeling their mortality. Lea, who will turn 70 later this year, forces himself to look ahead without flinching.

In “Stump’s Hernia,” he describes the apparently pitiable life, with decrepit truck and rudely prominent abdominal hernia, of his garbage man, wondering how such a person can still be happy. “We need to account for the man without some rhapsody / on the Happy Poor, which we know would be wrong.” And yet Stump is happy. He grins; his ruptured belly dances; he does a difficult job without complaint. He seems to love his life, and Lea makes us glad of it.

“Rodney Fallen” gives a glimpse of another hired hand. An old man delivering firewood slips on the ice, clunks his head and lies still as the poet looks on in shock. Is he dead? But “Then the blue eyes blinked, he looked at me and smiled / and spoke at last: ‘The Man Up There’s been trying / to pound some sense in this head for a long time,’” Yeats wrote that “Bodily decrepitude is wisdom,” and Lea would surely agree.

It also helps Lea face impending age to remember that youth was no picnic, either. In “Bent Tree, Straight Shadow,” he depicts himself and his high school buddies like a pack of hungry wolves, tormenting their physics teacher, the rumpled Mr. Bloch.

…So if when you talk

of the young you grow lyric, you’ve never known a child

or never been one. It takes a lifetime, it seems,

to have a heart, to make certain things add up.

And add them up he does. In “Another Breakup,” the poet, in a Chinese restaurant, rehashes his failed relationships with women, searching for redemption among the bitter ruins. “He wants a hopeful metaphor / like some gorgeous thing burst out / of a springtime chrysalis.” On cue, redemption arrives, on a little plate along with the check. “Cracking the cookie’s carapace, he unfolds and reads the fortune: / A man should turn to serener thoughts at the end of a muddy season.”

Returning again to school days, in “The 1950s,” Lea writes of how his high school hockey team exploited Rink-Rat, the team groupie, disfigured and lonely, who gave herself to any boy who asked. “What was the desperate longing, / if that’s what you’d call it, that made her so easy a mark?” By the end of the poem, he owns up to his own complicity and regret.

You’ll understand, as I try to skate over shame

It seems to have taken me all those years to name.

Again and again, the laureate smacks up against human loss and regret; instinctively he looks to nature for healing, not limiting himself to smelling the pretty flowers. “Manure: An Address on Older Age” was inspired by nature’s excremental bounty, starting with a vision of the Four Brothers Islands in Lake Champlain, a boyhood haunt now encrusted in cormorant guano. The poem ends with a bang, as the poet, annoyed by a flock of Canada geese fouling the shores of his pond, fires a shotgun over their heads to scare them away. Even as he banishes them, he relishes their glory:

How fine it seemed when geese, those excellent flight-machines,

were only tuneful specks, passing so high, so clean.

“Birds: A Farrago” is a 14-poem cycle that makes Wallace Stevens’ “Thirteen Ways of Looking at a Blackbird” look like a haiku. In it, Lea takes us through the course of a painful disease with an annotated life list of birds seen, aching joints and lost dreams. He describes solitary walks in nature as his therapy of choice, although prednisone helped. Emerging from this season of sickness, he is finally able to rejoin the world:

He let his beloved humans back

into his world, flew out of solitude

of self, remembered all that had ever mattered,

full of love and gratitude….

Even nature cannot always heal and cannot be entirely trusted, yet we must trust it. In “Six Lies About Nature, Ending With a Soul Tune Line,” Lea warns us against the nature lover’s favorite self-deceptions — that nature is economical, harmonious, faithful, pure and untouched by man, restorative and healing — even as he gives back what he has taken away.

You choose to think something’s out there. You name it hope.

You choose that name. And whatever superstition prompts the conviction, you’re sure

on being sure — it’s there, beneath the selfsame hornbeam which you’re pleased

to lean on in summer in whatever ramble occurs to you, on whatever day,

Lea never spares himself, nor are these sentimental poems. In each one, death and grace coexist in the same line, the same breath. In the title poem, “Young of the Year,” even as the poet joyfully brings his granddaughter on a mountain hike, he imagines his personal end and her human future. “Of course the glorious earth will take me back, of course the young-year hare give profligate birth.”

“Young of the Year”

that we call The Lookout. Young of the year.

I whisper the term our old folks use to name

a prior spring’s wild things — or the year itself, young year.

New grandfather now, have I a right to the phrase? I speak it no matter.

To me its assonance appeals;

its heft of optimism and forward-looking

correct a mood. It’s a counter-cry to my vain appeals

to some power unseen that it remake me into a youthful man,

that it change this world. I scrutinize

turned to fat white rivers in winter. I likewise scrutinize

me in relation to mountain. I used to charge her up and down

in a slim few hours. Today I wonder

if I’ll climb there again, my strength and stamina less

Above them I step onto aprons of stone

at her summit. I’d never have dreamed how much I’d love it,

knowing that child. In youth the thought would have turned me to stone.

On The Lookout’s granite, a wisp — unidentifiable, blooded — of fur.

So many hundreds and thousands of victims

in a cruel season. Behind the mountain an airplane

roaring to put me in mind of bombers searching out victims,

yet in time it may even be that I’ll prefer to see her from here,

not here from her. I mean the mountain.

The inner eyes go back and forth from baby to mountain,

where even now in January the hardwoods’ fraught tight buds

of spring. Which will come. Which has never failed to come.

Already the girl and I have developed private signals:

I can waggle my tongue before her, or flutter my fingers, and make her smile.

I can lie back humming in uncanny peace,

child on my chest, and I can remember how

I held her father. But I think I hold her better. Peace:

perhaps it’s for this one exchanges his further dreams. And perhaps I know

what’s worth the knowing here on earth,

among its weather-decked hills, its beasts and birds

in their ceaseless cycles, migrations. Of course the glorious earth

will take me back, of course the young-year hare give profligate birth.