When Andrea Serota talks about "the olden days," the comanager of the Adamant Co-op is referring to the months and years before mid-March 2020.

Back then, residents of the hamlet within Calais, along with other central Vermonters, would stop at the co-op for a bottle of wine, a dozen eggs, a loaf of bread and a little chitchat. Folks with the Adamant zip code, 05640, could retrieve their mail maskless from the little post office in the store. They might stick around for "benevolent gossip," as Serota put it. Eva Gumprecht, who's cooked and baked for the co-op, would show up with a pot roast or a batch of cupcakes.

In her studio above the co-op, artist Janet MacLeod could feel the energy of people coming and going as she painted. Taking a break from her work, MacLeod would come downstairs for coffee and a scone.

The olden days, in fact, span many decades at the Adamant Co-op, which was founded in 1935 and is the oldest food co-op in Vermont. MacLeod's grandparents, Chester and Lucy Anderson, were founding members (for a $5 share) of the cooperatively owned store that today has about 100 member households.

"It's the center of the universe for us," said Tom MacKenzie, a musician who's lived in Calais since 1980.

The shingle-and-clapboard building that houses the co-op is shrouded these days by bushy lilacs and marked by a faded green sign that announces "Adamant Cooperative / General Merchandise." A newer sign by the front door states: "No In Store Shopping." The co-op stands at a dirt crossroads by Sodom Pond, a body of water that still bears the name it once shared with the hamlet. (Early in the 20th century, residents requested a name change for the dry-land portion of Sodom, adamantly and successfully, according to The Adamant Co-op Cookbook.)

"It's the center of the universe for us." Tom MacKenzie tweet this

For MacLeod, memories of the co-op include seeing the paneled delivery truck parked in her family driveway, her mother painting lettering on its side. She also recalls childhood trips to Bliss Pond in Calais with a stop for popsicles at the co-op.

"It was a very different community then," MacLeod said. "It was rougher socially, and rougher in terms of the landscape."

Still, the custom of popping into the small co-op for a snack and a "Hey, what's going on?" persisted for decades. It came to an end in March, when winter gave way to a cold spring and the coronavirus forced businesses around the state to reexamine their practices.

"Those of us working in the store in the olden days were face-to-face," Serota, 72, said. "Suddenly, we began to feel extremely vulnerable."

The co-op board, in collaboration with the staff, decided to close the doors to the public and offer curbside pickup of preordered provisions. Customers place their orders by telephone, talking with a staffer or a volunteer who effectively serves as a personal shopper and places the order on the porch for pickup. On June 8, partly to serve kids riding around on their bikes, the co-op started accepting orders of up to five items from people at the door. But only postal customers may enter. 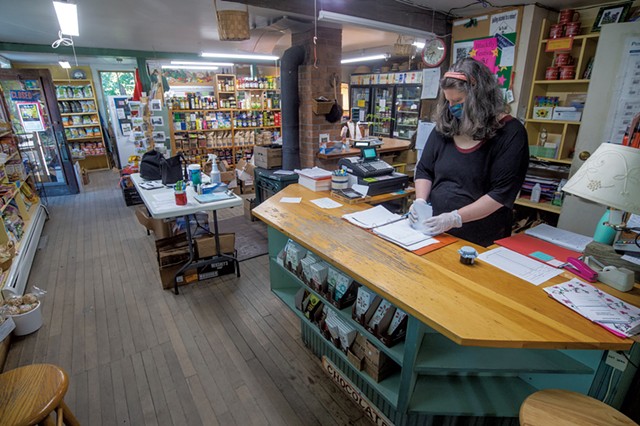 The staff tries to keep the in-store limit to three people, including workers, which can be a challenge if the farmer who delivers eggs arrives as a co-op member shows up to retrieve mail from a post office box.

Yet the post-olden-days arrangement, from volunteer help to stocking the store, is working. "I am a total atheist and cynic," Serota said, "and I feel like this is a miracle."

She and her husband, Rick Winston, are longtime Adamant residents (he moved there in 1970) and former owners of the Savoy Theater in Montpelier. Like other Adamanters, Serota can't or won't say how many people live in the hamlet. The common refrain is that living in Adamant is a state of mind.

"Like any state of mind, it has many qualities," Serota said. "There's a strong element of playfulness ... and a strong sense of camaraderie."

The shift from face-to-face hangouts to curbside community coincided with increased need for the co-op. Vermonters were sticking closer to home in compliance with the governor's March 24 order to "Stay Home, Stay Safe." Some people, especially elderly and otherwise high-risk Vermonters, were steering clear of bigger markets.

As a result, the co-op's business boomed during what's typically a slow time of year: mud season in the sticks. Last year, from mid-March to mid-May, the Adamant Co-op lost about $4,000. This year, in the same period, the member-owned store earned a profit of more than $2,000, according to MacLeod, who is copresident of the board.

Staff and volunteers say that some days business is nonstop, with orders ranging from $20 to $200. Other days are slower, allowing staff to have longer phone conversations with customers and do administrative work.

Jane Wass, 69, a retired nurse who's lived in Adamant for 21 years, volunteered at the co-op before the pandemic. She helped with summer cookouts and stuffing empanadas in the upstairs kitchen. Now she's on phone-shopping duty.

"People want to contribute," Wass said. "For me, it's been absolutely joyful. I look forward to coming in every day."

Regina Thompson, 50, lived in Calais for a couple of years before she discovered the co-op. Originally from Vienna, Thompson stopped in one winter day in 2009 while her son attended a nearby birthday party.

The woodstove was lit, and the place felt wonderful and inviting, she recalled. The following summer, when a position opened up at the store, she applied and was hired. Today, Thompson is the co-op's comanager.

Before the pandemic, the vibe at the co-op was more laissez-faire and laid-back, she said, with time for talking to people.

"You're working, but you weren't coming in at eight and running around like crazy until one," she said. "We feel more like counselors than store clerks."

She misses that camaraderie, the palpable sense of being a community hub, but she recognizes the value of the co-op's current "utilitarian" work.

"We cram everything into the cooler," Thompson said. "It's no longer the 'cute store.' We are serving the public, making sure we have food for the public."

While service remains curbside, Thompson's starting to see more people out and about. When she asks members if they'd like the shop to reopen for regular service, most people say, "No, we like it this way," she recounted.

Even with public service as its driving force, the co-op has held on to the identity that Gumprecht, 70, recognized and appreciated when she moved to Adamant from Boston in 2005.

"It's the triumph of the human need to connect over efficiency," she said.

The original print version of this article was headlined "Curbside Community | In Adamant, the state's oldest food co-op adapts to the coronavirus era"