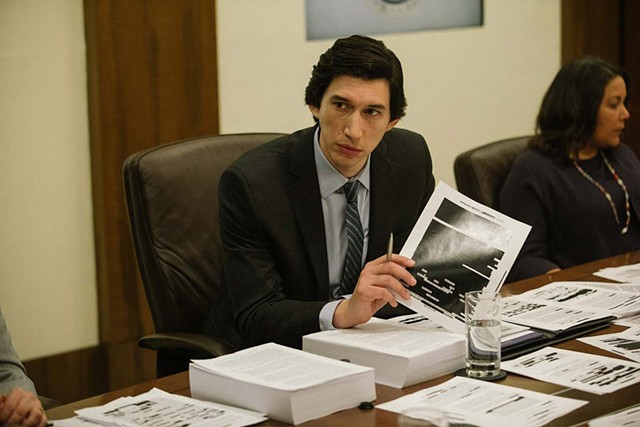 Another awards season, another Dick pic. Who would've guessed Cheney would join Rudolph, Charlie Brown and Frosty in the pantheon of recurring holiday characters? Last year he slithered back into the popular consciousness via Adam McKay's black comedy Vice. Now he's the driving force behind the wrongdoing chronicled in the directorial debut of screenwriter Scott Z. Burns (Contagion).

The Report looks back at the infamous Detention and Interrogation Program that the CIA implemented following 9/11. It does so through the eyes of Daniel Jones (Adam Driver), the U.S. Senate Select Committee on Intelligence staffer who, in 2007, was tasked with investigating the agency's use of "enhanced interrogation techniques." Sen. Dianne Feinstein (Annette Bening) puts Jones on the case after learning hundreds of hours of taped interrogations have vanished. Who's hiding what, and why?

Jones pieces together the answer over six years by studying millions of agency memos, records and emails. He has zero choice. Nobody at the CIA will speak to him, and Republicans on the committee drop out when the probe into Bush/Cheney-era practices is announced. Sound familiar?

I call this a Dick Cheney picture because we learn early on that neither President George Bush nor Secretary of State Colin Powell was told about the enhanced interrogation program. The vice president and staff at the National Counterterrorism Center went rogue, assembling a shadow branch of the government. Amazingly, the program not only had no legal authorization, it didn't have an iota of science behind it.

A memorable scene re-creates the day in 2002 when retired U.S. Air Force psychologists James Mitchell (Douglas Hodge) and Bruce Jessen (T. Ryder Smith) pitched Counterterrorism Center brass on their revolutionary new bag of tricks. Claiming to have reverse-engineered the coping strategies soldiers are trained to use when captured, they sold the agency on the benefits of tactics such as waterboarding, stress positions and mock burials. Nobody asked for documentation of their effectiveness. Both men admitted they'd never conducted an interrogation, though Jessen boasted of having taken part in "a real simulation." Their initial contract was worth $180 million.

As Jones connects the dots with a small staff in a bunker-like office, it becomes increasingly clear the powers that be intend to keep his work from seeing the light of day. Burns alternates between horrific scenes of the torture Jones documents and investigative relevations such as the program's total lack of results. The director contrasts these realities compellingly with the controversy that followed the release of Zero Dark Thirty (which claimed intelligence from detainees made possible the mission that took out Osama bin Laden), as well as with president Barack Obama's reluctance to acknowledge the truth publicly — a complicity with the CIA that, Burns posits, ensured his reelection.

This is intense, suspenseful, cerebral stuff. It's a long story, and Burns doesn't attempt to make it short. Revelation follows incredible revelation, so don't worry for a minute that you already know what happened. You don't know the half of it. And all of it is presented with the utmost skill. From its performances (with Marriage Story coming soon, this is the year of Adam Driver) to its dialogue, The Report earns every accolade that calls it a throwback to the likes of All the President's Men.

The good news: Jones' work reached the public in 2014. The bad news: The CIA issued its own report listing the torture program's successes in 2016. Oh, and Mitchell Jessen and Associates is still open for business. Looks like we're gonna need a sequel.

The original print version of this article was headlined "The Report"