Theater Review: The Importance of Being Earnest 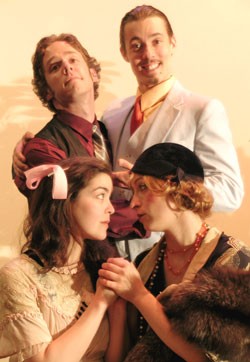 Oscar Wilde’s wit is like icicles in the midday winter sun: glittering, dripping and slightly dangerous. The Irish playwright’s bons mots and barbs sparkle as sharply today as they did during his creative apogee in the early 1890s, when his plays were the toast of the London stage. Failure to smile while watching or reading Wilde may indicate a Botox overdose.

The writer’s enduring power comes from his spot-on insight into people, much more than from clever plot twists or complex character development. In The Importance of Being Earnest (1895), Wilde makes brilliant fun of the tangled messes men and women create while falling in love because he deeply understands the crazy ways of the human heart. “Aha!” moments abound. As you laugh, you may also silently nod: Been there, done that. Got the scar.

The most important rule of staging Wilde effectively is: First, do no harm. His words should star. In Lost Nation Theater’s current production of Earnest, David Poirier’s direction largely succeeded in showcasing the rhythms of the playwright’s language. Although the technical elements lacked LNT’s usual polish, most cast members crafted their characters memorably. And Caleb Probst’s portrayal of Algernon embodied the joie de Wilde with such zest that his performance alone made the play worth seeing.

The plot hangs on a slender, silly thread. Two aristocratic young Englishwomen believe that they must marry a man with the name of Ernest. No other moniker will do. Two aristocratic young men have invented fictional characters to get themselves out of unwanted obligations. The women fall for the men’s alter egos, who are christened Ernest. Will feminine ardor wane when the women discover the real names? From such petty peril Wilde spins an evening of fizzy fun.

Act I takes place in Algernon Moncrieff’s London flat. He and his friend Jack discuss their habit of “Bunburying,” that is, escaping by means of elaborate excuses. Algernon finds the distressingly poor health of his made-up friend, the invalid “Bunbury,” often calls him away on short notice. Jack Worthing, a respectable country gentleman and guardian of young Cecily Cardew, comes regularly to London because of his wayward fictional brother, Ernest.

In London, Jack assumes the persona of Ernest, which allows him to become more rakish and romantic. He shares with Algernon that his beautiful, impressionable 18-year-old ward has become enamored with stories of his bad-boy brother. But when Jack sees Algy’s interest in Cecily piqued, he strictly forbids his friend to meet her. As Ernest, meanwhile, Jack has fallen in love with Gwendolyn, daughter of the formidable Lady Bracknell. His inability to prove suitable parentage — he was an orphan adopted by Cecily’s grandfather — leads the Lady to prohibit the lovebirds from becoming engaged.

All the forbidding and prohibiting, of course, drives both pairs of lovers together. Algernon slips off to the country to meet Cecily, introducing himself as the urban legend Ernest. Nubile Cecily has already engaged herself to him, having fallen in love from Jack’s stories and chronicled the match dutifully in her diary. Jack shows up in the country, followed shortly by Gwendolyn. The women experience much confusion over how both can be engaged to Ernest, and then comes the inevitable feminine alliance of outrage.

Can adult re-christenings, offered by the obliging Reverend Canon Chasuble, overcome the name hurdle? How to get around the adamant opposition of Lady Bracknell? Wilde piles on whimsical improbabilities as he unwinds the story. And as he skewers the snobbery and social conventions of his fellow upper-class Victorians, timelessly perceptive witticisms bubble forth from the plot’s froth.

As Algernon, Caleb Probst hit all the right notes. He conveyed the insouciant charm that makes the other characters ultimately willing to forgive Algy anything. Probst’s voice was flexible and strong, and he delivered every delicious dig and declaration clearly to the audience. He expertly paired nuanced comic timing with aristocratic body language — elevated brow, jutting jaw — to distill a delightful quintessence of Wilde. Watching Probst’s performance, I saw flashes of English actor Rupert Everett: an understated blend of comedy and elegance.

As Jack, however, Joshua Davis veered too far toward overstatement. He did not seem at home in his character’s skin. He tried too hard to sell his lines, occasionally stumbling with the delivery. His facial expressions were often exaggerated, his movements somewhat stiff. That said, director Poirier highlighted Davis’ strengths in scenes of tight banter between characters. Davis captured Jack’s awkwardness when he proposes to Gwendolyn, and his repeated frustration in conversations with his friend Algy. Well-timed pauses gave laugh lines punch throughout the play, for Davis and the rest of the ensemble.

Both lead actresses skillfully portrayed how the prospective fiancées mix feisty, flirtatious and flighty feminine qualities. As Gwendolyn, Megan Callahan had expressive eyes that turned up to tease, widened in surprise and narrowed with determination as her character tries to take charge of her destiny. Kate Kenney marvelously conjured Cecily’s willfulness and changeability. But she had one nagging obstacle to overcome: she looked inappropriately young for the part. Cecily is 18, but Kenney appeared barely 15 on stage — an important distinction, given her frequent kissing scenes with an older character. Better costuming, makeup and hair could have remedied this.

Cecily’s nightgownish pink dress, which accentuated her childlike appearance, was just one of many wardrobe missteps by costume designer Becke Sheloske. Emme Erdossy, as Lady Bracknell, suffered from another: a mismatched black (or was it brown? eggplant? all three?) and mint-green outfit for the final act that detracted from her character’s regal demeanor. Erdossy played a formidable battle ax, growling her disapproval and dispensing upper-crust opinions with Olympian hauteur. But the ensemble was so odd — clashing colors, too-long skirt, plastic-flower-topped hat — that it pulled the focus from her acting.

Among the secondary roles, Kim Bent’s performance as the Reverend Canon Chasuble stood out. Bent lent a gently lascivious edge to the self-proclaimed celibate man of the cloth who breathlessly pursues Cecily’s governess. Poirier, who is a gifted comic actor himself, staged the action artfully to highlight double-entendre-laden lines, such as Chasuble’s cheeky come-ons, without hamming them up into farce.

The visual elements did not match the high comedic standards, however. Poirier chose to set the play in 1923 rather than Wilde’s Victorian era, but the overall design did not strongly support any period. Sheloske’s unappealing costumes distracted from several performances, with bad color choices (shocking ’70s orange for Jack), inappropriate style (Prohibition gangster for Algy in Act I), and poor fit (Gwendolyn’s blue sleeveless dress).

Ellen E. Jones’ lighting and scenic design yielded mixed results. Algy’s apartment in Act I connoted late Victorian rather than any early-20th-century style. Two nice details: The garden furniture for the country set mirrored the layout of the London flat, and the painted floor worked well as both interior parquet and exterior stone. But the plastic flowers decorating the outdoor set were tacky and tired — the opposite of anything suggesting “English country estate.” I didn’t think such garish faux foliage was still being made.

Oscar Wilde’s humor has a gloriously sophisticated edge, so the lack of visual swankiness in LNT’s Earnest did disappoint. But the chance to revel in Wilde’s wit outweighed this. His pearls continued to delight long after the actors’ final bows, such as this observation from Lady Bracknell: “Ignorance is like a delicate exotic fruit; touch it and the bloom is gone.” Rather than remaining ignorant of Wilde’s pleasures, local theater-goers are advised to risk a bite.