Actor Rick Ames Is Out of His Head 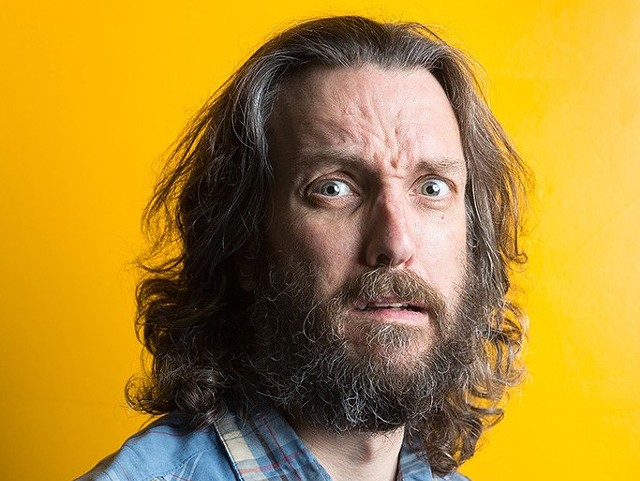 Rick Ames can be a sentimental man, and it shows in his compilation of original material, a one-man show titled Out of My Head. In two 45-minute acts composed of songs, poems and monologues, he deftly rhymes and reasons his way through crime, homelessness and various reminiscences.

The show, subtitled An eclectic collection mined from the mind of G. Richard Ames, opens at Off Center for the Dramatic Arts in Burlington this Thursday, March 3. It's a hodgepodge of hopes, dreams and painful memories bound together primarily by their place of origin: Ames' eccentric noggin.

This isn't the first time the 45-year-old Vermont actor has presented original work, but it is the first time he has written, directed and starred in a production of this scope. And that may be long overdue.

Ames is on record as saying he'll cry at reruns of "Little House on the Prairie," so it's not surprising that some of his work here is emotional. But his adept use of rhyme and alliteration keeps the sometimes-heavy subject matter from weighing down the performance. Upbeat prerecorded accompaniments from eight musical friends, including his sister-in-law, don't hurt.

Take the elegy Ames wrote for his childhood dog, Major, in 1999. From any other adult singer's lips, the lines "Even though he has died, he's still by my side, Major, Major" would seem drippy and overwrought. But Ames' folky rendition, with guitar accompaniment by Rebecca Padula, is the right kind of heartfelt. It's sincere and beautiful and underscores the meaning of "man's best friend."

There's humor in the Out of My Head mix, as well. "To B+E or Not to B+E," a comedic monologue, details the motivations of a man obsessed with "unconventional entries and exits," explains Ames. The song is partially autobiographical. The narrator, like Ames, was birthed via C-section, and he speculates that this entrance into life predisposed him to breaking and entering. Though it's a comical number, lines such as "That's why I do what I do; I'm not a monster" invite the audience to humanize individuals often seen in a less favorable light.

Similarly, "Homelessness," written while Ames was living in New York City in 1989, gives voice to a population that many try to ignore. In the opening monologue, his character speaks about the cardboard box he uses for shelter. "It seems that many people care more about the objects that come in these containers than the people who end up living in them," he says.

Out of My Head is "fairly family-friendly," Ames promises, adding that it's "rated PG for mild language and innuendo."

Ames is a talented vocalist, performer and composer, and word has it he's an all-around good guy, as well.

Kevin Christopher of Saints & Poets Production Company, who directed Ames in A Winnie-the-Pooh Christmas Tail last December, has worked with the actor in numerous productions since 1999. "Rick is always the first one at load-in and the last one there at strike," Christopher says. "He's one of the most dependable and trustworthy guys I've been onstage with and directed. When you're that person, sometimes you don't get as much acknowledgment as you should," he adds. "I think this is a much deserved showcase for him."

The original print version of this article was headlined "'Head' Case"