It was eerily fitting that Wednesday's Climate SOS Rally, held on the steps of the Vermont Statehouse to urge lawmakers to swiftly address the climate crisis, was itself plagued by soggy conditions, wild temperature swings, and rapidly melting ice and snow.

It was as if Mother Nature herself had come to make a point.

“The weather is certainly weird, and we’re going to help show [lawmakers] that,” said Rebecca Schwarz, one of the event's organizers.

At noon, about 75 activists from around the state arrived on the statehouse lawn wearing life preservers, pool floats and snorkels and carrying  banners and signs urging the legislature to declare a climate emergency. Waving large blue tarps and plastic bags to create the illusion of rising seas, activists called on policymakers to prioritize a swift and equitable transition from fossil fuels to renewable energy sources.

Slideshow Climate SOS Rally at the Statehouse on February 23, 2022 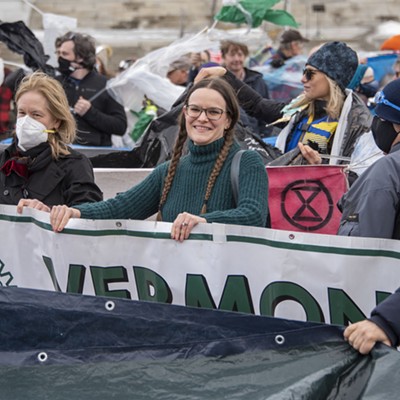 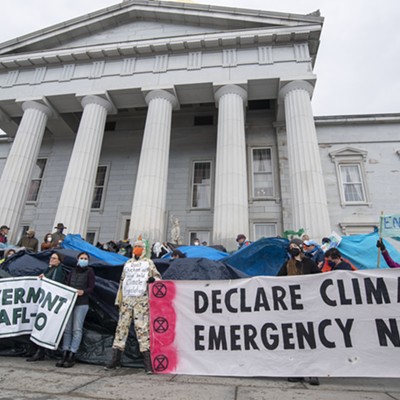 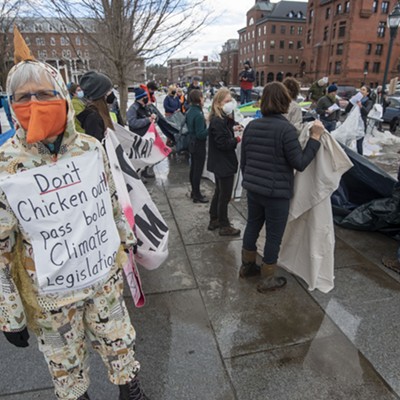 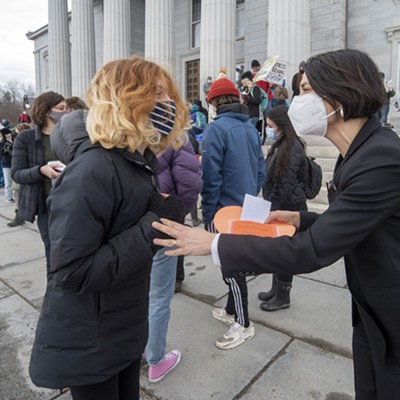 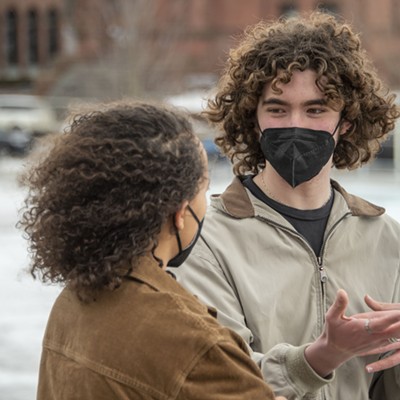 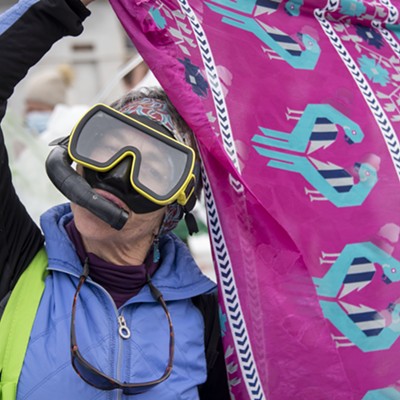 Climate SOS Rally at the Statehouse on February 23, 2022
Click to View 15 slides
The rally was cosponsored by a coalition of organizations, including 350Vermont, the Vermont Youth Lobby, the Vermont Public Interest Research Group, Rights & Democracy, the Vermont AFL-CIO, Standing Trees, and Extinction Rebellion Vermont.

The rally didn't focus solely on the climate crisis; it addressed a constellation of related issues, including the proliferation of plastics in the world’s oceans, reform of the state’s bottle bill, labor rights, social justice and theft of land from Indigenous peoples. But many of the speakers and protest signs clarified that failure to address the rising global temperatures poses a unique, existential threat to all humanity. 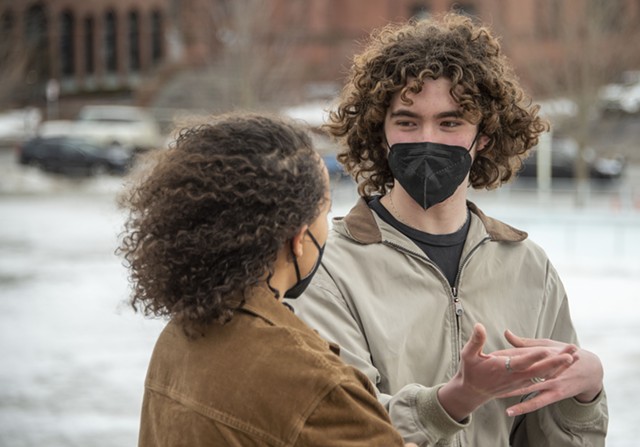 Gabe Groveman, an 18-year-old senior from Montpelier High School and a member of the Vermont Youth Lobby, expressed his frustration and exhaustion from growing up inundated with dire news about the worsening climate emergency while little gets done at the state or federal level.

“Every day that we do nothing is a day of my future, the future of Vermont and the future that all young people are going to live in [that] grows darker," Groveman said. “My generation did not create this crisis. Yet we’ll be forced to live with the consequences if another legislative session goes by without bold and just climate action.” As many speakers noted, there is little doubt that the effects of the climate emergency will impact the Green Mountain State and will be felt most acutely by low- and middle-income Vermonters. 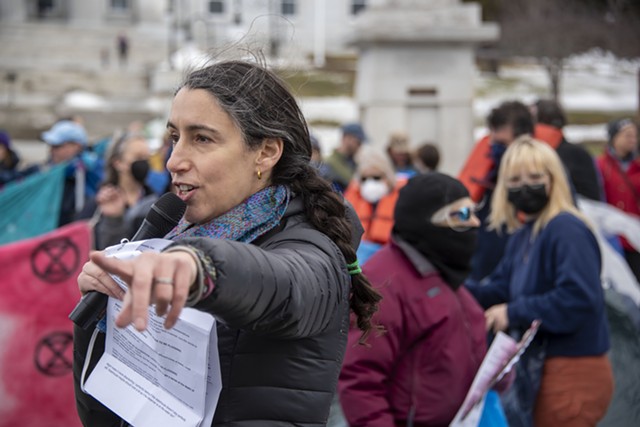 A  recent University of Vermont study, published in the January 10 issue of the journal People and Nature, bears out that assertion. UVM researchers projected that, in the coming century, climate-induced flooding will cost the state more than $5.29 billion. Low-income families, especially mobile home residents who live in flood-prone areas, are most at risk, researchers found.

Organizers from 350Vermont decried what they called "false climate solutions," such as the sale of renewable energy credits, which, they said, provide corporate loopholes that allow  greenhouse gas emitters to profit at the expense of the most vulnerable. They condemned so-called "renewable" energy sources, such as biofuels and Hydro-Québec's hydroelectric dams, for releasing significant amounts of methane, flooding indigenous lands and destroying communities.

There was little evidence that state lawmakers were paying attention to the rally outside. Among the few legislators who came out to listen to speeches and talk to activists was Rep. Heather Surprenant (P/D, Barnard), a member of the House Agriculture and Forestry Committee. A small-scale organic farmer, Surprenant expressed disappointment that more of her colleagues weren't present.

“I don’t think they’re coming out,” she said. “This is less their comfort level and domain. Oftentimes, policy is slower than the pace I would appreciate.”

While acknowledging the abundance of gray-haired activists in the crowd, the 30-year-old  Surprenant suggested that there's generational divide in the legislature between younger lawmakers who "get it" and their older colleagues.

"It’s just newer for the older folks. It feels less dire to them than younger generations," Surprenant added. “We want to meet them where we’re at, but we also don’t have time.”