Act 250 Reform Fizzles in a Session Constrained by COVID-19 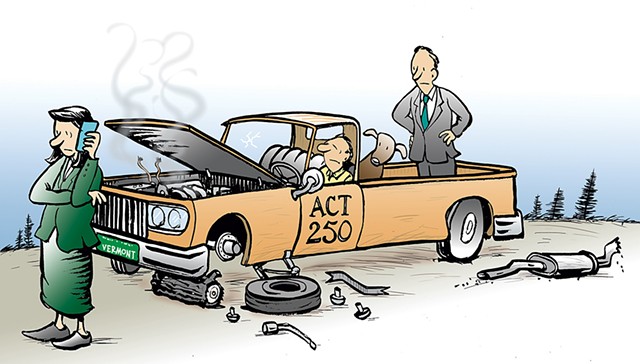 An ambitious three-year effort to overhaul Act 250, Vermont's signature land-use law, is petering out with little to show for it — leaving advocates, lawmakers and administration officials worried that they've missed a chance to modernize the 50-year-old law for the 21st century.

Most recently, a Senate committee abandoned efforts to write a bill that would include both stricter regulations sought by environmental groups and new exemptions from the law that businesses and housing advocates hoped would spur development in downtowns and village centers.

Instead, the Natural Resources and Energy Committee pared the reform bill down to a handful of changes intended to protect large forest blocks and wildlife corridors. The measure would also suspend Act 250 jurisdiction over existing trail networks until clearer rules can be written.

The committee passed the rewrite last week, but its path forward is unclear. If approved by the full Senate, the House, which struggled for a year to craft its own bill, would still need to agree. Officials in Gov. Phil Scott's administration have withdrawn all support.

"I don't think this one gets across the finish line, to be honest with you," Sen. Corey Parent (R-Franklin) told his colleagues before voting against the bill in committee.

"If I had to sum up my feelings in a word, it's disappointed," Moore said in an interview. "We had an opportunity to think about exactly what values Act 250 brings and what the opportunities are to improve it and ready it for the next 50 years, and this is where we've landed."

"I don't think this one gets across the finish line, to be honest with you." Sen. Corey Parent tweet this

Since 1970, Act 250 has required large residential and commercial developments to show that they won't unduly harm the natural environment or overburden community services. Supporters say the law and its network of nine decision-making citizen commissions has been instrumental in protecting Vermont from shoddy development. Critics have long accused the law of constraining growth because the project review process is sometimes long and costly, with an unpredictable outcome.

In 2017, amid mounting concern that the law is ill-equipped to address the climate crisis and other new, more complex environmental threats, the legislature formed the Commission on Act 250. The six-member panel of lawmakers spent more than a year holding public hearings around the state and drafting dozens of recommended changes.

Its final report proposed a major overhaul of the law to address forces never envisioned in 1970, including the regulation of greenhouse gas emissions, preparing river corridors for increased flooding, focusing development in downtowns and restricting ridgeline development.

Regardless of the fate of the pared-down bill, Moore now fears that any momentum for a broader reform effort has irrevocably stalled.

Asked about the bill on Tuesday, Scott said he was "a bit discouraged" by where it had landed but expressed hope that some progress could still be made.

"I don't believe that the latest version of the Senate bill is all that we had hoped for," Scott said.

Others share their concern. The yearlong effort to successfully get a comprehensive reform bill through the House was a "heavy lift" that may be hard to muster again anytime soon, Brian Shupe, executive director of the Vermont Natural Resources Council, acknowledged.

"Whether they have the stomach for repeating that effort, I don't know," Shupe said of lawmakers.

His organization still supports the narrowly tailored bill as an important step toward resolving conflicts that have festered for years. The fragmentation of Vermont's forests by development, for instance, threatens the many benefits provided by intact woodlands.

The bill would require that developers "avoid, minimize or mitigate" subdivision and land uses that break up forestland. It is widely believed that chopping up forests into smaller and smaller parcels reduces wildlife habit, threatening water quality and making timber production more difficult. Agricultural, forestry and timber businesses would be exempt from review.

Similarly, recreational trails in rural areas have become important tourist destinations, but careful analysis of their impact on forests and wildlife is needed, Shupe said.

With a pandemic roiling the state, Shupe acknowledges that lawmakers have more pressing issues on their plates. "It's hard to take a long-term land-use development policy and say it's as much of a priority as short-term crisis management is," Shupe said.

Sen. Chris Bray (D-Addison), chair of the Natural Resources and Energy Committee, said he knows it will be challenging to revisit an issue that has consumed three years of legislative time.

The broader attempt to reimagine Act 250 failed, legislators say, because of the law's complexity, the passions it evokes and the many time-consuming questions stirred up by the proposed changes.

With a law as important to the state's identity as Act 250 — which he often describes as part of the state's DNA — Bray said he prefers to be very cautious when enacting changes. Critics of the law will always be louder than supporters, Bray said, and lawmakers need to separate anecdotes about individual cases from systemic problems that require legislative intervention.

"I think a measure of conservativism and taking a 'first do no harm' approach is really appropriate for something as fundamental as our land-use laws," Bray said.

But that deliberative approach proved challenging for a far-flung legislature that has been meeting virtually during an unprecedented crisis. Sen. John Rodgers (D-Essex/Orleans), for example, argued strenuously that lawmakers should focus solely on addressing the COVID-19 pandemic and avoid issues as complex and consequential as Act 250.

A member of the natural resources panel, he argued that many of the early reform proposals would have disproportionately affected rural areas such as his, where poor internet service leaves people least able to participate in Zoom-based legislative hearings. After Rodgers missed a committee vote in June, he blasted the committee's process, saying it lacked transparency and failed to be inclusive of a broad set of viewpoints, charges other committee members denied.

While there are equity issues with the remote legislation process, Shupe said that, on balance, he thinks internet-based hearings actually increase transparency and public participation.

"You go on Zoom, and sometimes you see 25, 30 people watching. You could never fit that many people into the committee room," he said.

The problems with Act 250 reform predate COVID-19, according to John Brabant, a lobbyist who represents Vermonters for a Clean Environment.

Brabant accused Shupe's organization and the administration of sowing distrust by meeting privately in 2019 to try to cut a deal on a package that included the elimination of the citizen-based district commissions that make many Act 250 decisions. The backlash from those who felt blindsided caused the deal to collapse, Brabant said.

The House passed a broad reform package preserving the commissions. But that version lacked administration support, so Bray sought to narrow the scope of a bill he also found unwieldy.

Brabant said the final bill accomplishes little and his group can't support it because passage would only delude people into thinking real progress had been made.

He urged the committee not to even call the bill Act 250 reform, suggesting they instead rename it a "forests, wildlife habitat and trail protection bill."

"That way it doesn't distract from an effort next session to really work on making Act 250 better," Brabant told the committee.

Groups that build and maintain recreational trail networks also expressed frustration. For years they have faced uncertainty about whether and when they must obtain Act 250 permits before building new trails. The Senate measure now includes an 18-month moratorium on requiring such Act 250 permits while an Agency of Natural Resources report about new rules is developed for the 2021 legislative session.

The Vermont Trails Alliance supports that provision but is frustrated that it has been held hostage by the larger political process, said Warren Coleman, the group's lobbyist.

"There's widespread support for the recreational trails legislation, but it has been used as a leverage point for everyone involved," Coleman said. Such "political games" aren't appreciated by people just trying to solve problems, he said.

"They don't understand why issues aren't resolved on their own merits," Coleman said.

While narrowing the bill down to just its least-controversial elements might seem like a good compromise, Moore, the natural resources secretary, argued that such a piecemeal approach is undesirable.

Exempting downtowns from Act 250 review — which was central to the original reform bill — was extraordinarily important because it would help focus development in those areas and take pressure off development in the state's rural areas, she said.

Similarly, tighter restrictions on subdivision of forests may affect the long-range financial health of forest property owners, Moore said. That's why the administration proposed exempting forest products businesses from such reviews. Doing so would make it more likely that owners of forestland could keep their properties as working forests and relieve the financial pressure to subdivide, she said.

Bray said he appreciates the need to craft legislation that balances competing interests but also thinks focusing on clear solutions to specific problems is a smarter approach.

Toward the end, he said, it wasn't clear whether exempting 215 areas of the state — 23 downtowns, six growth areas and 186 village centers — from any Act 250 review would solve more problems than it might create.

While he knows some are weary of the subject, Bray said he was actually encouraged by the passion people showed for Act 250 and the state it has helped shape.

"If people are tired, everyone should take a break, refresh themselves, reprioritize their interests and come back with good heart next January," Bray said.