A Vermont Company Designs Handicap-Accessible Modules for Any Home

Occasionally something appears on the market that makes so much sense, it's a mystery why no one offered it before. That distinction applies to Wheel Pad, an eco-friendly, modular house extension designed for wheelchair users.

At only 200 square feet, the bed-and-bath unit can be added on to an existing house without triggering zoning or building codes. It can be wheeled up to the house's side on its mobile, adjustable-height chassis base; a window or door of the house is removed for access between the two structures.

An entry ramp needs to be added, and an insulated hose and extension cords attached to the house's system, but otherwise — voilà!

With Wheel Pad, a family doesn't need to implement major renovations to the home in order to accommodate, say, an injured returning vet or accident victim. And, for those suddenly rendered dependent on others, the module offers more independence and privacy.

The pad has a built-in Hoyer lift track to facilitate moving the resident between bed and bath. Everything is at wheelchair height: outlets, a built-in table, bath fixtures, windows. The floor is nonslip. The bathroom door pushes open in both directions.

All of that may sound institutional, but Wheel Pad decidedly does not resemble a hospital room.

"Joseph wanted it to be the coolest room in the house," says Julie Lineberger, who is married to Wheel Pad's architect, Joseph Cincotta. The couple owns LineSync Architecture in Wilmington; Lineberger is the business manager. 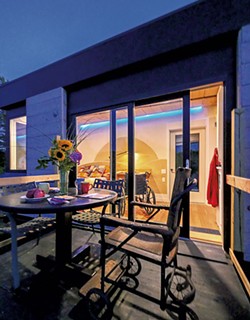 They believe that "things don't need to cost more to be beautiful," as Lineberger puts it. Accordingly, that lift track doesn't just run across a bare ceiling; it's recessed behind tilted panels of wood. Grab bars in the bathroom aren't the standard steel tubes but clear acrylic. Indeed, the bathroom itself looks to be straight out of a high-end architecture magazine, with corrugated sheet-metal walls and a clerestory window. Colored LED lights line the perimeter of the living or sleeping area, and a cheerful design of overlapping circles in wood veneer decorates the walls.

So far, only one Wheel Pad exists. Built by architecture students and professors at Norwich University in Northfield, the prototype is destined to be free-leased beginning next month by Lineberger and Cincotta's longtime friends, the Payne-Meyers of Putney. Cynthia Payne-Meyer, 59, broke her neck in Hawaii last Easter Sunday while bodysurfing with their three sons and is currently paralyzed from the chest down.

If it weren't for Wheel Pad, her husband, Rod, says, "We would have been doing all kinds of renovations in the house to make it wheelchair accessible." Now Cynthia can be moved directly from the rehab facility back home. Rod hasn't seen the Wheel Pad yet, he says, but, judging from the photos, declares that "everything being at a level that's useful to someone in a wheelchair" will be a godsend.

"You don't think like that until you have to," he adds.

Because the prototype was built entirely on donations, it will be perpetually free-leased on a six- to 18-month basis. When the Payne-Meyers are finished with it, LineSync will refurbish it and pass it on to someone else in need.

Next month, three more Wheel Pads are going into production, says Lineberger. She expects to sell them for $60,000 apiece to those interested in permanent installation, or to lease them for $3,000 per month — a cost much lower than most nursing homes, she points out.

Because of the level of international interest Wheel Pad has generated, the couple has launched it as a separate business. Last year, the project won an award for the unusual category of "best temporary small space" from World Architecture News, a London-based publication. Resulting inquiries have been coming in from Great Britain, New Zealand, Holland and beyond, says Lineberger.

And Lineberger herself was just named Socialpreneur 2017 by the organization Leading Women Entrepreneurs. She also just learned that she's a finalist in AARP's Innovation Challenge.

Meanwhile, LineSync has been towing the prototype around Vermont using a Ford pickup. (Any full-size truck with a trailer hitch will do the job.) Visits to hospitals, care facilities and the Tiny House Fest in Brattleboro have generated interest from, among others, individuals with ALS, multiple myeloma and cerebral palsy.

While Lineberger and Cincotta develop their spin-off business, they will both continue to head LineSync. The firm's projects include the expansion of Mount Snow ski resort, led by Cincotta, and smaller projects such as the post-Tropical Storm Irene Resilient River Apartments in Wilmington, which won an American Institute of Architects-Vermont award in 2014.

"We have done wonderful projects, both public and private," says Lineberger, but "the opportunity to design something that will assist families and keep them together" puts Wheel Pad at the top of their accomplishments.

As the World Architecture News jury commented, "Nothing about this space speaks of being patronizing or being sympathetic. This is a home."