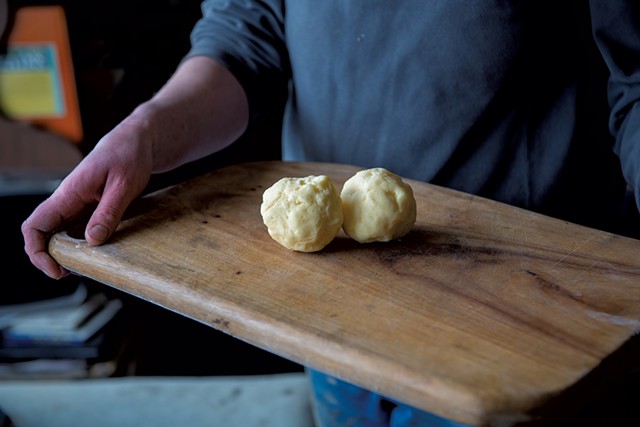 Twenty-two years ago, St. Clair, 65, launched Animal Farm butter from her small Orwell farm with a handwritten letter to chef Thomas Keller. His prestigious restaurants include the French Laundry in Napa Valley and Per Se in Manhattan.

St. Clair sought feedback on the cultured butter she was making from the cream of her tiny herd of Jersey cows. Keller responded promptly with his FedEx number, asking for a sample. After a taste, "He said, 'I'll buy anything you can send me,'" she recalled.

A more recent handwritten letter ushered in Animal Farm's next phase. Sent to St. Clair last summer by Shoreham farmers Ben and Hilary Haigh, it made possible St. Clair's retirement and the transfer of her niche dairy business to a new generation.

"It's all about the cows." Diane St. Clair tweet this

On January 31, the Haighs bought St. Clair's herd, her milking and creamery equipment, and her business, all of which they are relocating to their Rolling Bale Farm in Shoreham. There, they will operate Animal Farm Creamery and continue to make an average of 100 pounds weekly of butter, which sells for about $20 a pound to a handful of specialty food shops and high-end restaurants, including Keller's.

St. Clair declined to share the sale price, but the Haighs estimated the total cost of the purchase plus new infrastructure and equipment at around $281,000. Toward that sum, they landed two loans for a total of $197,000, as well as a $24,999 Vermont Working Lands Enterprise Initiative grant.

The young farmers, both 33, have hedged their bets that they can thrive in the narrow but lucrative market that St. Clair cultivated over two decades. St. Clair, in turn, has handed over the cows, production methods and customer relationships that she nurtured obsessively.

Over the past two decades, the press has described the butter maker's single-minded focus reverently, with few quibbles about a retail price of up to $60 per pound.

"Animal Farm butter is no doubt a strong contender for the most awesome butter in the country," Hugh Merwin wrote for New York magazine's Grub Street blog. In Saveur magazine, Alex Halberstadt described it as "the most intense I'd ever tasted."

The impossibly creamy, lightly sweet butter has a rounded flavor with a delicate tang. That flavor varies with the season and what the cows eat, but it is always clean, fresh and so delicious that even this salt-loving reporter savored its unsalted purity.

On top of roughly $100,000 in annual butter revenue, Animal Farm generates about $25,000 in annual buttermilk sales. Its tongue-coating, softly acidic, butter-flecked buttermilk is utterly distinct from most brands, which are skim or low-fat milk with culture added. That natural by-product of churned, cultured butter is also used to culture each batch of cream.

On March 16, Hilary Haigh arrived before sunrise at Animal Farm's on-site creamery to put the cultured cream into the churn. "I meant to get here at six, but it was actually 6:15," she admitted. "I was up most of the night lambing."

The Haighs now juggle creamery chores with their preexisting pastured meat operation. While Ben, an accomplished builder who mills much of his own lumber, finishes their new creamery, Hilary ping-pongs between Shoreham and Orwell, where St. Clair temporarily rents them hers.

At 7:45 a.m., Hilary pointed at a small glass porthole on the gently sloshing stainless steel churn. "See those tiny globs collecting on the glass?" she said. "That's butter."

She opened a spigot to unleash a stream of buttermilk into a plastic tote. "That makes me hungry every time," Hilary said.

She often skips breakfast on butter-making mornings. "It's all I can do to get up," she said. Luckily, buttermilk makes a great snack. Hilary poured herself a cup, then added cool water to the churn and ran it slowly to rinse the butter. She repeated the drain and rinse twice more.

Six weeks earlier, on February 1, Hilary had driven the eight miles from Rolling Bale to Animal Farm to pasteurize cream for her first solo run of butter. Then she and St. Clair loaded seven Jerseys onto a trailer and drove them to their new home.

But she knew all too well that it would be even harder to keep her business going herself. Although her husband, large animal veterinarian Al Clarisse, helped her out, the physically demanding operation was largely a one-woman show, and it had taken its toll.

"We do everything by hand," St. Clair explained. "When the cows are in, we're shoveling shit by hand. We don't have a pipeline; we carry our buckets of milk. I lift 50 pounds a day of milk and cream and buttermilk all day long."

Her chiropractor was among those who suggested she try to take it easier. "I was like, 'That's impossible,'" St. Clair said.

In early summer of 2021, St. Clair contacted Sam Smith, a farm business planner at the Intervale Center, who works with about 30 farms each year.

Smith came out to Animal Farm to discuss options. Selling the farm along with the business was a nonstarter, since the couple did not want to move. "I told her she'd get the most money from selling it as a trophy farm to someone who had heard about the butter," Smith recalled.

But St. Clair resolved to find a successor before winter. "If every farmer I talk to who said they wanted to transfer [their business] had that level of motivation," Smith said, "we would have a bunch of different farm owners right now."

Around the same time, Clarisse headed over to Rolling Bale for a routine vet visit. He mentioned to Ben that he and St. Clair were considering slowing down. The potential sale of the butter business came up. "Al's usually a man of few words, but we were talking a long time," Ben recalled.

The Haighs had always hoped to have a small dairy herd. Both had worked at Ben's uncle's organic dairy in Shoreham. The couple talked it over, and Ben handwrote a one-page letter on yellow legal paper. It essentially said, "If you'd be interested in selling the business in a few years, we'd be interested," he recounted.

A couple days later, St. Clair called. She wanted to sell — but soon.

St. Clair thought the Haighs were a great match for her business. "It was critical that they already had a farm," she said. More important than their previous work in dairy was their understanding of how to manage pastured livestock. "You have to learn to make the butter, but the real issue with this business is farming. It's all about the cows," St. Clair said.

"I've known Hilary since she was a little girl," she added.

Auspiciously, Hilary and Ben met in 2008 at Animal Farm. Hilary, who grew up on Doolittle Farm in Shoreham, was house- and cow-sitting. Ben comes from Lowville, N.Y., but his mother is from Shoreham. He was helping an uncle roof St. Clair's creamery.

Hilary and Ben started dating after they earned their degrees: hers in animal science from the University of Vermont and his in forestry from Paul Smith's College in New York. In 2014, they began farming together in Shoreham on leased land. Two years later, through a stroke of small-town luck, the couple bought a 100-acre Shoreham farm with affordable owner financing.

On Rolling Bale, the Haighs raise beef, lamb, chicken and pork. After having their second son in 2019, Hilary focused on farming full time, while Ben continued to do custom sawmilling.

The new creamery business has both required and allowed Ben to devote himself to farming. The Haighs have no regrets.

"When we evaluate our life, we always come back to wanting to be farmers," Hilary said. "It seems so essential, so important." 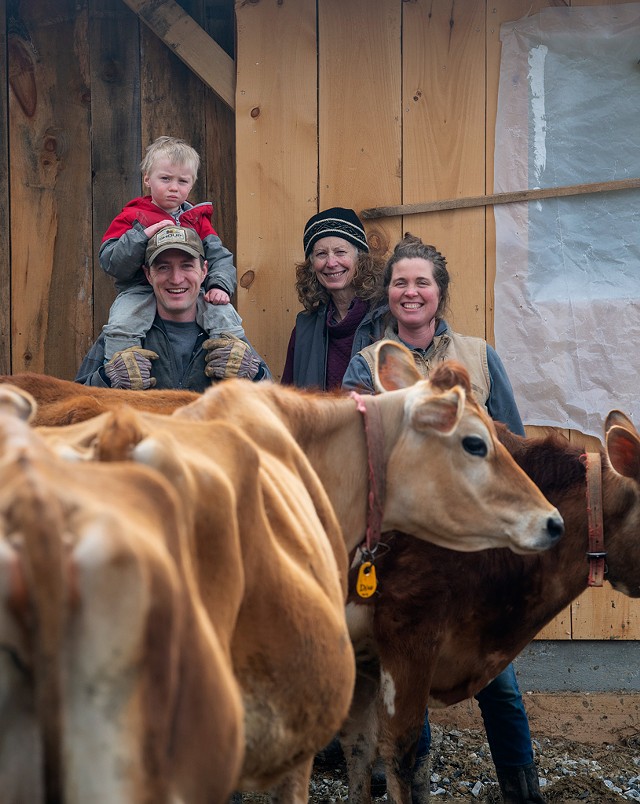 Smith of the Intervale Center agreed with St. Clair that the Haighs were a great fit. He had worked with them on their farm purchase and been impressed by their motivation and business savvy. "I couldn't think of a better prospective buyer," he said.

It could also make financing challenging.

Sarah Isham, director of agricultural lending at Vermont Agricultural Credit, signed off on a loan that includes the value of the deal's intangible assets, including future cash flow. She felt comfortable doing so because the Haighs were taking on "a 20-year-old established business of premium products," Isham said. "They were handpicked by Diane St. Clair, and they put together a very good business plan. They really checked all the boxes for us."

Hilary acknowledged that she was a little nervous about stepping into St. Clair's shoes, especially with the cornerstone restaurant accounts. But, after St. Clair made introductions, all have been "easy to talk with and so supportive," she said.

On March 16, Hilary reached into the churn to pull out the butter. "This is the best part," she said. "It feels like soft, silky play dough. It makes you want to stuff your whole arms into it."

She kneaded the golden mass under running water to remove any traces of buttermilk and used an ice cream scoop to shape four-ounce butter balls. These would be chilled and then packed four to a zippered plastic bag.

The no-frills packaging is how St. Clair has always shipped butter, even to three-star Michelin restaurants such as the French Laundry and the Inn at Little Washington.

Julian Eckhardt, executive sous chef of the latter Virginia restaurant, said via email that the Inn at Little Washington has ordered 25 pounds of Animal Farm butter a week for almost a decade. The butter stands out, Eckhardt wrote, for its exceptionally high butterfat, minimal processing, freshness and subtle, seasonal flavor shifts. "We serve it as simply and unadulterated as possible," he said: whipped with a little sea salt beside house-baked bread.

The ownership transition has been smooth, Eckhardt added.

"It is moving to see an artisan like Diane so focused not only on the integrity of her butter," the chef wrote, "but also on ... sharing her methods with a new generation."