The first time Krista Scruggs worked with apples was in the fall of 2017. It was the inaugural vintage for her ZAFA Wines — the realization of years of work in the wine industry. Scruggs had honed her skills and philosophy by farming and fermenting grapes in California, Europe and Texas, as well as in Barnard, Vt., as assistant winemaker at Deirdre Heekin and Caleb Barber's La Garagista Farm + Winery.

"I was working with apples out of necessity, not out of choice," Scruggs said. In a tumultuous harvest year filled with pest and disease pressure, she had lost about two acres of the grape crop she'd been counting on to produce ZAFA's first wines.

However, 2017 was an abundant apple year in Vermont, and Scruggs was able to make up the difference with pomme fruit from wild trees and from a piece of property in Barnard belonging to Worthy Burger co-owner Dave Broderick, whom Scruggs calls a "pivotal mentor."

The unsprayed trees on Broderick's property are more than 125 years old. They produce gnarly, unnamed apples that are questionable for eating but ideal for cidermaking.

Scruggs never thought about using apples when she went into winemaking. But learning from Heekin — and being in the realm of exploratory fermentation that La Garagista and Barnard's Fable Farm Fermentory have developed — normalized the idea of working with apples in addition to grapes.

"Being surrounded by people with the philosophy that 'cider is wine,' I never questioned it," Scruggs said. "I know not everyone feels that way, but technically, according to the government, that's what it is."

Scruggs had seen Heekin fermenting grape pomace on top of cider and knew that Fable Farm had been experimenting with the same idea. Influenced by that process but wanting to put her own twist on it, she pressed the apples and started a true sugar-to-sugar co-fermentation with that juice and frozen must from grapes harvested a month prior.

Scruggs macerated the pulp for six weeks for one batch, eight weeks for another, even though she'd never seen a long maceration applied to apples.

"It didn't necessarily smell good, but I trusted what I was taught, which is to taste," Scruggs said. She was doing what she knew, which was how to make wine from grapes, a process in which long macerations are common.

"It was out of ignorance, honestly, but also trusting my palate. Because of that vintage, I'm kind of fearless," Scruggs said. "Apples truly changed my career and my view of fermenting. Now I'm obsessed. I'll never not work with apples."

Those first co-fermentations got the attention of the natural wine world when Scruggs poured her debut at Brumaire, a highly curated natural wine fair in Oakland, Calif. A flood of press and accolades followed, including a spot in Wine Enthusiast's coveted "40 Under 40" list. That's where she hit the radar of fellow honoree Michelle McGrath, executive director of the United States Association of Cider Makers. 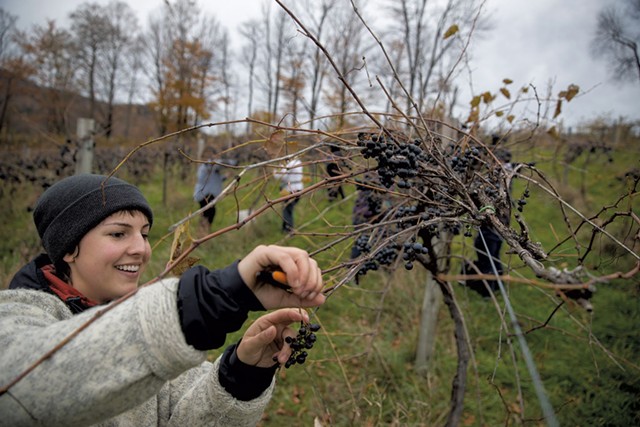 "I discovered that Krista also makes cider and became fascinated with her perspective as a winemaker who was making cider very enthusiastically," McGrath said in a phone call. "She transfers her ethos of winemaking so seamlessly to cider."

McGrath invited Scruggs to speak at USACM's CiderCon, the annual trade conference for the American cider industry, this past February in Chicago.

The request came as a surprise to Scruggs, who agreed to speak on two panels — one about embracing and encouraging diversity in the cider world, and one showcasing and pouring still ciders. [Disclosure: This reporter moderated the second panel.]

"Never in my life did I think I would be at CiderCon," Scruggs marveled.

The still cider that Scruggs poured was Naïve Melody, named after the Talking Heads song "This Must Be the Place (Naïve Melody)." It's a poetic coincidence, but also a representation of Scruggs' accidental entrance into the cider world.

"Did I find you or did you find me?" she said, quoting a lyric in the song. "That's what cider has been for me."

"Especially compared to the wine industry, the cider industry is still feeling its way out and finding itself," Scruggs continued. "I'm still very naïve, but they see the beauty in my naïveté."

Scruggs has since joined USACM's Diversity Committee, which was formed by the board of USACM immediately following the diversity-focused panel at CiderCon, McGrath said. Scruggs appreciates the acceptance she has felt from the cider industry as someone who not only dismisses the traditional categories of "wine" and "cider," but is a black, queer woman in a largely homogenous industry.

"I'm so grateful for the cider community," Scruggs said. "More than the wine world, they're just like, 'Does it taste good or not?' They accept the way I blur the lines, saying, 'It's just fucking fermented juice,' and making the details of whether it's grapes or apples irrelevant."

Scruggs sees her work as a way to celebrate how the traditions of wine- and cidermaking have evolved while continuing to disrupt those industries' implied boundaries and assumptions.

"Everything I do is in honor of tradition, but if we lived in a world that only honored certain traditions, I wouldn't be able to be a black woman making cider and wine in America, let alone farming or having access to land," Scruggs noted. 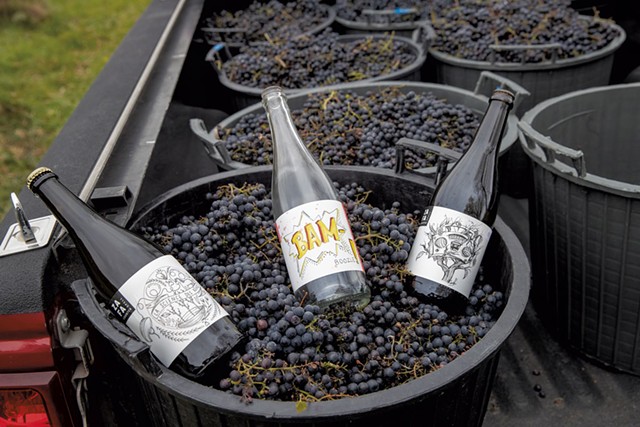 One way she's taking action is literally written on the wall at CO Cellars, the tasting room and winery she shares with Shacksbury cidery in Burlington's Soda Plant: "Wine (n)/ wn/: A beverage usually made from grapes, but also made from various other fruits and flowers."

The definition reflects Scruggs' irreverence toward the strict delineation of wine, cider and even beer. "It doesn't fucking matter what it is, and all [that] these semantics create is a wall that puts a guard up for consumers and new fermenters alike," she said.

When a customer walks into CO Cellars, they might see apples stacked in baskets or grape juice dripping out of the press. The smell of fermentation fills the air.

Colin Davis, cofounder of Shacksbury and Scruggs' close collaborator in the space, said, "We want to expand people's idea of what wine is and [help them] understand CO Cellars as a working winery. You can see fermentation happening and see the winemaking techniques we're using."

CO Cellars opened last winter as a shared consumer-facing retail space and tasting room for ZAFA and Shacksbury, and as a place for Scruggs to produce her wines. It has since evolved into a third, separate brand, with the release this past week of BDE — a blend of wild sour cherries and cider.

"As we were thinking about what we wanted to accomplish there, the third brand made sense," Davis said. "It allows an avenue for being creative in a way that our established brands don't, and makes it so we're not confusing customers."

For Davis, that's a return to Shacksbury's roots and to getting his hands dirty. For Scruggs, it's a way to offer product when her nationally distributed wines sell out.

"As much as I like to say I'm all Woo! Wild! Let's experiment! I have a particular vision of what ZAFA is," Scruggs said. "Having the third brand allows me to work hand in hand with Colin and Nick [Janson, Shacksbury's production manager], sharing what I know about grape fermentation and continuing to learn about cider from these guys, who I really admire. It also gives me more product for people to have access to that's still reflective of my ethos."

The partners have decided that a large portion of the CO Cellars collaborations will only be available in the tasting room in 750ml crowlers, labeled as wine and costing less than $20 per bottle. The brand will focus on native fermentations using wild or organically farmed fruit.

"We share similar philosophies on production and farming," Davis said. "But even though we have those things in common, we're coming at it from different perspectives."

"A lot of people say you can't have any natural wine in America that's less than $20, but it's possible here in Vermont because we're working with ingredients that are local to here," Scruggs explained. "We're looking around us and being resourceful, which is the Vermont way."

Scruggs is in Vermont for the long haul; she's currently under contract for land in Isle La Motte, where she will plant grapes and apples for future fermentations. In the meantime, that "Vermont way" and community support have bolstered her success.

"The way I've grown in the last year, having not come from money, has been through community," she said.

Working with Shacksbury, buying fruit from other vineyards, and managing vineyards in Northfield and Huntington are all pieces of the ZAFA puzzle — as are the apples she's foraging around the state with her dedicated team.

"People know I'm in a transitional phase and that I'm here to stay," Scruggs said. "I'm growing my business while continuing to honor my philosophies and ethos, and the community selling me fruit or giving me access to the trees on their land is clearly a statement that they want me here, too."

Correction, October 23, 2019: The story has been updated to remove a misquote.

The original print version of this article was headlined "This Must Be the Place | As an accidental cidermaker, Krista Scruggs embraces "the Vermont way""