The idea for the Vermont Tech Jam came out of a shared concern: that young people might be leaving the state for better jobs without being aware of Vermont's myriad high-tech career opportunities. In the fall of 2007, Adam Greshin, a partner in Sugarbush's Summit Ventures, published an op-ed piece suggesting a solution: an "ultimate job fair." Citing a twice-yearly Hub Crawl in Boston as a model, he outlined an "information download and networking session" with Vermont's high-profile companies, noting it "would be a terrific way to introduce students to the potential of a career in Vermont."

Turns out a number of entities had envisioned a similar event — and had complementary interests in bringing Vermont's growing companies and job seekers together. Members of the Vermont Technology Alliance are seeking qualified in-state workers; the region's academic institutions — in this case, Champlain College, the University of Vermont and St. Michael's College — train students to meet the needs of today's employers; VSAC helps with the finances. Seven Days attracts 70,000 highly educated Vermont readers to its employment-classifieds section every week. Burlington's CEDO is invested in fostering a thriving local economy.

These groups came together to organize the first annual Vermont 3.0: Creative Tech Career Jam. It was an "ultimate job fair"— many of the 50+ exhibitors were actively looking for employees to fill good-paying jobs. But it was also a showcase of growing Vermont businesses with reputations that extend way beyond the state's borders: Burlington's SoundToys works with Beck, GrandMixer DXT, Broken Social Scene and Paul Simon. Polhemus won a special-effects Academy Award for its motion-capture technology on the movie True Lies. Vermont Systems Inc. makes the recreational software used on all the U.S. Army and Navy bases in the world. Companies such as NRG Systems, Microstrain and dealer.com are leaders in their respective fields of wind energy, robotics and automotive e-commerce.

Two concurrent speaker series — and a popular "Guitar Hero" demonstration — broke up the business booth action. One featured reps from Vermont companies that have stayed competitive by incorporating technology, including Concept2, groSolar, JDK, Resolution, Contois Music and the Data Farm. The other focused on unusual tech training programs offered by local colleges and universities. 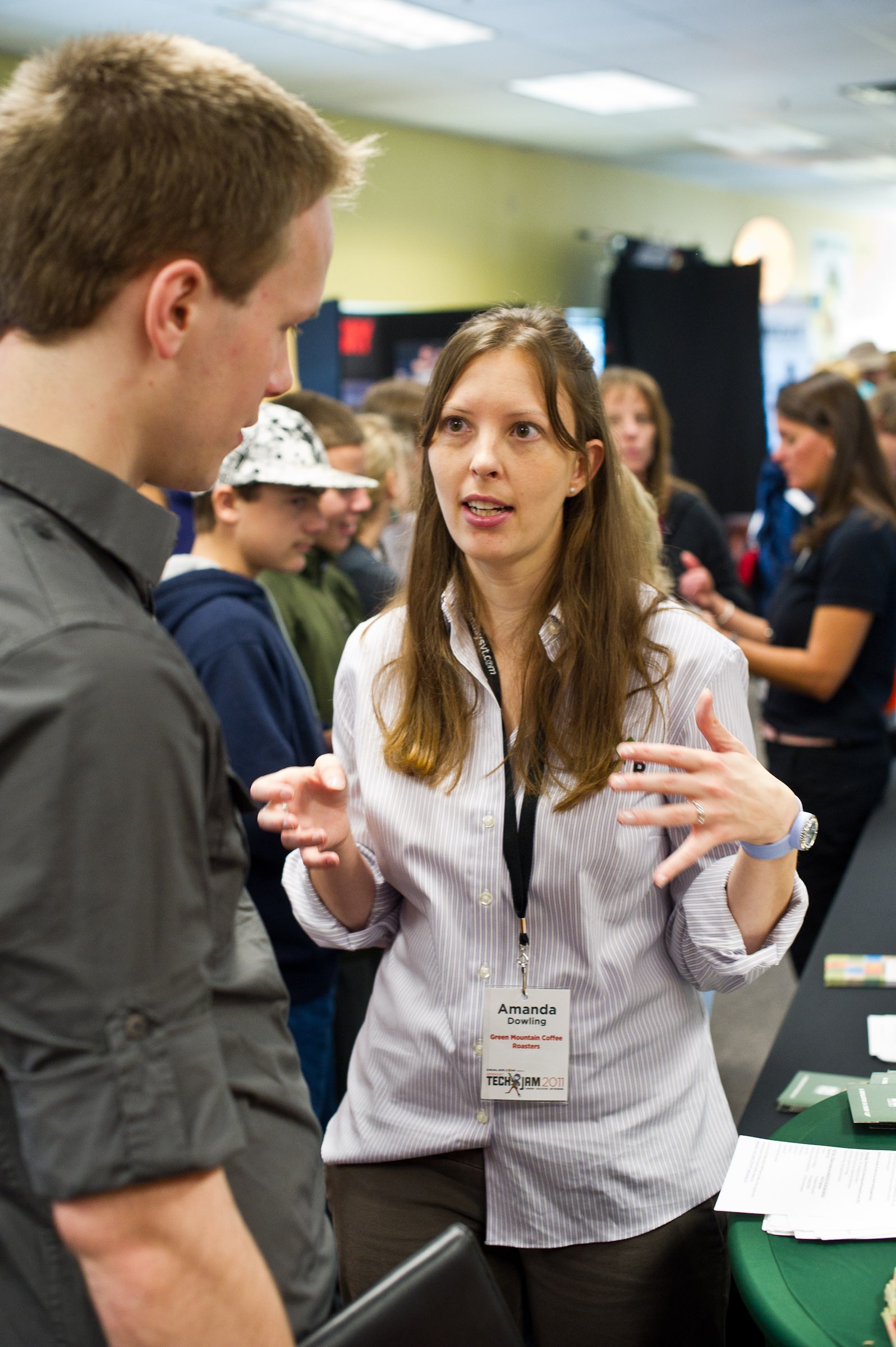 Hundreds of people attended that first Tech Jam, on Saturday, January 26, 2008 at the Main Street Landing Performing Arts Center on the Burlington Waterfront: high-school students still in the company of their parents; resume-clutching college students from as far away as McGill and Amherst; and career changers of all ages. Exhibitors lost their voices, but happily collected the names of dozens of qualified candidates.

Hundreds more attended a second Career Jam in October at Champlain College, which drew 50+ exhibitors and featured 13 panel discussions organized around the theme, "So, You Wanna..." (i.e. "So, You Wanna Build Websites?", " So, You Wanna Write for the Web?" etc.).

The Lake Champlain Regional Chamber of Commerce helped plan the third "Innovation Jam" at the Sheraton Burlington in October of 2009. It focused on entrepreneurship, and helping Vermonters navigate the road to self-employment.

The 2010, the Tech Jam returned to its original venue, the Main Street Landing Performing Arts Center, and featured 65+ exhibitors, and lots of high-tech jobs.

In 2011, the Tech Jam dropped the "3.0" from its name, becoming, officially, the Vermont Tech Jam. For the first — and possibly only — time, the event took place on Church Street, downtown Burlington's prominent pedestrian mall, in the space on the corner of Church and Cherry Streets that housed Borders Books & Music, and is now home to City Sports.

The 2012 Tech Jam, presented by Dealer.com and MyWebGrocer, and organized by Seven Days and the Vermont Technology Alliance, is scheduled for Friday and Saturday, October 26 and 27. The Jam is leaving Burlington this year; it will take place across the river from the Queen City at MyWebGrocer's Winooski HQ — a former textile mill that's now home to more than one thriving software company. Another first: the Vermont Technology Alliance will be giving away two awards to some of the area's top innovators.

Check this website regularly — or sign up for the Vermont Tech Jam newsletter — for the latest updates, and to stay connected throughout the year.

Photos from the 2011 Tech Jam by Andy Duback