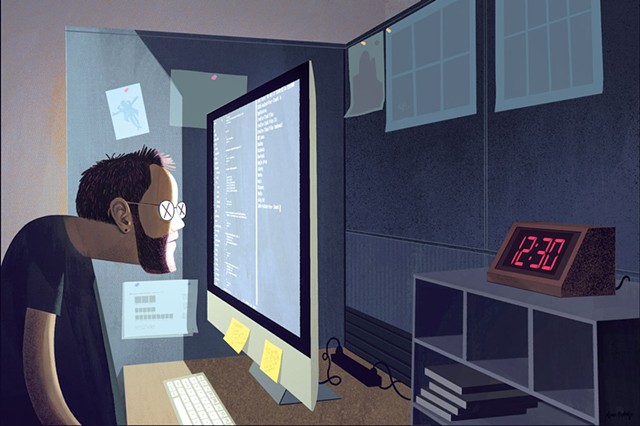 On December 1, approximately 10,000 Vermonters will become eligible for overtime pay. That has employers nervously crunching numbers and consulting labor lawyers.

Both groups have President Barack Obama to thank — or blame. In May, the U.S. Department of Labor announced a rule change addressing the "white-collar exemptions" in the Fair Labor Standards Act. Previously, employers didn't have to pay salaried workers overtime as long as they performed administrative, professional or managerial duties and made more than $23,660. Through an executive action, Obama more than doubled the salary threshold, to $47,476 — which will make 4.2 million more U.S. workers eligible to receive time-and-a-half pay when they work more than 40 hours a week.

High-profile political battles over labor policies — increasing the minimum wage and making paid sick days mandatory — have raged for years, both locally and nationally. But few people had been paying attention to overtime rules.

This inconspicuous federal policy change caught many employers by surprise. With just weeks until it takes effect, some are scrambling to adjust.

Obama's rule will likely have a profound impact, should it survive legal and legislative challenges. Just two months ago, 21 states sued the federal labor department to try to quash the rule. One week later, the Republican-controlled House of Representatives voted to delay implementation for six months. Obama has pledged to veto any such legislative action if it reaches his desk.

Labor-friendly Vermont didn't join the lawsuit. The state's labor commissioner, Annie Noonan, noted that the salary threshold hadn't been increased for years. In the 1970s, 62 percent of salaried workers qualified for overtime pay, compared with a mere 7 percent today. The revised federal rule includes a provision to update the salary threshold every three years.

"I don't understand how someone who is working more than 40 hours a week doesn't get compensated for that," said Melinda Moulton, codirector of Main Street Landing and a vocal advocate for workers' rights. "It's just not fair."

"It will put more money into the pockets of hardworking Vermonters," predicted Dan Barlow, public policy manager at Vermont Businesses for Social Responsibility. He conceded, though, that doubling the salary threshold is "not without its complications for businesses."

"It is debilitating," said Maureen Cregan Connolly, executive director of the Homebuilders and Remodelers Association of Northern Vermont. Project managers "work a lot of crazy hours during the summer," she noted, which could create significant overtime costs for the construction businesses she represents. "It's going to be one of those sudden shocks to the system," Connolly said.

Erin Sigrist, president-elect of the Vermont Retail & Grocers Association, said her members are already grappling with the additional expense of providing paid sick leave to employees — as required by a state law that takes effect in January. The overtime change kicks in mid-holiday season, the busiest time of year for many stores, she said.

Nonprofits have even more to worry about. That sector is known for low wages and long hours — 43 percent of New England nonprofit employees make less than $28,000 a year, according to a 2014 study by the group Third Sector New England.

Lauren-Glenn Davitian is the executive director of the CCTV Center for Media and Democracy. The 32-year-old nonprofit in Burlington's Old North End runs two public-access TV channels and trains citizens to produce their own media. As part of a project called Common Good Vermont, CCTV provides resources to local nonprofits and has been spreading the word about the overtime rule.

"I think this change in the law shows that we have been balancing our budgets on the backs of nonprofit employees for a long time," Davitian said.

That applies to her organization, too, where 50-hour workweeks aren't uncommon. On October 1, CCTV employees making less than the threshold began tracking their hours to ensure they work no more than 40. Davitian estimates this reduction in hours will be equivalent to losing one and a half employees.

Cutting hours isn't the only way to comply. Employers can also increase employees' salaries above $47,476 to make them exempt again, eliminating the unpredictability of overtime. Or they can reduce the employee's salary to compensate for having to pay for additional hours.

Some employers are choosing to pay their formerly salaried workers on an hourly basis to better track hours. Hourly workers are already eligible for overtime, so if employees work extra under this arrangement, their employers still have to pay them for it. "Comp" time — when an employee applies today's extra hours to future time off — is no longer an option under the new rules, unless it happens within the current payroll week.

That tension is apparent at so-called "designated agencies" — private nonprofits the state contracts to provide developmental and mental health services. Most of them depend on Medicaid and Medicare funding and are already struggling with meager budgets, said Julie Tessler, executive director of the Vermont Council of Developmental and Mental Health Services.

The overtime change will affect a whopping 75 percent of the 17 agencies' workers — 3,350 people — and will cost $5 million, Tessler said.

Northwestern Counseling & Support Services, which serves Franklin and Grand Isle counties, has 566 employees and a $39 million budget. It offers 24-hour crisis services, behavior interventionists in schools and residential treatment programs. Soon, according to human resources director Tony Treanor, 192 previously exempt employees will qualify for overtime. If the organization were to raise their salaries above $47,476, it would cost $2.5 million, he estimated. Instead, Northwestern Counseling plans to start paying most of those employees on an hourly basis at a rate equivalent to their current salary.

Susan Loynd is the director of administrative operations and human resources at Washington County Mental Health Services. She's determined that 155 of the agency's 240 employees will fall below the overtime salary threshold; giving them raises to bring their salaries above it would cost $1.4 million.

"Many of our exempt-level staff are working well beyond 40 hours a week," Loynd said. Case managers, therapists and others serve clients at odd hours and often end up completing paperwork on their own time after work. "It's going to be a huge cultural shift to try to get people to not work more overtime," she said.

Services might be cut. "We're going to have to take a really hard look at our programming and triage what we're going to be able to do that will have the least impact on our clients," Loynd said.

Washington County Mental Health Services is already understaffed. Across all the designated agencies, Tessler said, about one in 10 jobs is vacant — partly because the agencies can't pay much. "We have a human resources crisis already, so you add this to it and it's going to have a huge impact."

The mental health services council plans to ask the new governor and the legislature for an additional $5 million in January. If that's denied and agencies cut services, the entire mental health system will be strained — including already overwhelmed hospitals and emergency rooms, Tessler warned.

Some institutions will cope just fine. Teachers are exempt from the rule, as are state employees. According to Vermont's human resources commissioner, Tom Cheney, state workers already get overtime, as per their union contract.

At the University of Vermont Medical Center, just 110 of 7,800 employees are affected. Administrator Thomas Kess said the hospital will start paying those workers an hourly rate equivalent to their current salaries.

Champlain College officials are similarly unruffled by the change, which affects 15 percent of the workforce. Mary Margaret Lee, a vice president, said the school supports the increase, even though it will cost $450,000 a year.

Ultimately, Davitian predicts, the rule change will prompt a cultural shift. Working more than 40 hours a week without extra pay has been an unquestioned reality for many middle-class workers — and, in some circumstances, an expectation from their employers. "It's a good thing to bring this out in the open," Davitian said.