About Dam Time: A Senate Bill Would Open the Floodgates to Vermont Small Hydro 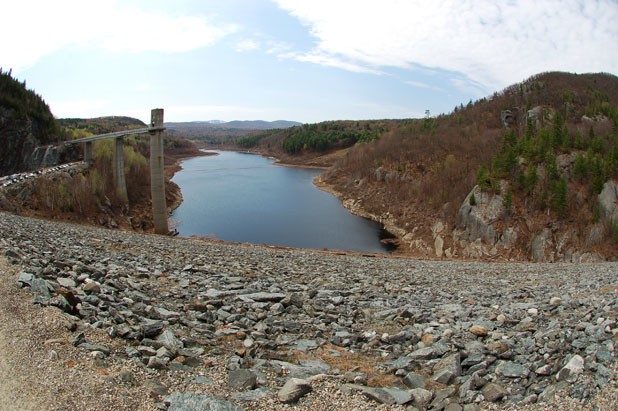 For a state whose economy was built upon gristmills and sawmills, Vermont has made little new use of its rivers to power its burgeoning renewable-energy revolution.

A hydroelectric developer and consultant, Barg has spent years fighting for regulatory approval of two hydro projects on the West River in Jamaica and Townshend that together would power 3000 Vermont homes. The projects, which make use of existing flood-control dams, received a favorable environmental assessment from federal regulators in December — but final approval is far from certain.

“If anybody told me two beautiful, low-impact projects like this would take five years, I would have been surprised,” Barg says. “These are the kinds of projects we should be jumping all over.”

Barg and fellow hydro proponents hope a bill that passed the Vermont Senate last week will help streamline what they describe as an onerous regulatory process. The legislation authorizes the state to engage in a pilot program with the Federal Energy Regulatory Commission to expedite the approval of up to 20 small-hydro installations.

“The FERC process is aimed at much larger projects. It’s for the big stuff, like the Wilder Dam,” says Sen. Dick McCormack (D-Windsor), who supported the bill when it came before the Senate Committee on Energy and Natural Resources. “In fact, the same level of environmental review and environmental protection could be achieved with a somewhat less expensive, less time-consuming process.”

The legislation, which is headed for the Vermont House, is based upon a similar agreement reached by FERC and the state of Colorado in August 2010. According to Francisco Flores-Espino, who runs the program within the Colorado Governor’s Energy Office, just 24 small-hydro projects were approved in that state during the 30 years prior to its agreement with FERC. In the year and a half since the Colorado pilot program was implemented, however, 10 projects are on track for approval.

“One of the main reasons why developers were not moving ahead with projects was they perceived the process was far too complex,” Flores-Espino says. “I think developers are more confident going through the FERC process now.”

By empowering one state office to prescreen potential projects and weed out unrealistic or environmentally detrimental ones, Colorado is able to deliver higher-quality applications to FERC. In exchange, federal regulators agree to waive the first two stages of consultation, which can be time consuming. According to Flores-Espino, that process reduced the approval time from as many as two years to fewer than six months.

FERC spokeswoman Celeste Miller agrees that the arrangement with Colorado has been a success, saying the process “resulted in more complete applications for small-hydro projects,” which, she says, helps expedite the process. Miller said FERC would be open to working with Vermont — or any other state that expresses interest in such an agreement.

“What seems to be the case in Colorado, and we hope would be the case here, is it would promote the development of these low-impact projects and perhaps filter out other projects that, while small, are not low impact,” says Brian Fitzgerald, the stream flow protection coordinator for Vermont’s Agency of Natural Resources.

Fitzgerald’s agency is currently charged with issuing water-quality certificates to potential hydro projects. If the pending legislation passed, ANR would work with the state’s Department of Public Service to negotiate the exact terms of an agreement with federal regulators.

“I think it’s a good opportunity to see if there are some good, small projects out there, and if there are, to give them some help to get through the process,” Fitzgerald says. “But it’s going to be up to the developers to identify these and bring them forward, and we’re not going to be out there trying to drum up business.”

It’s an open question as to how many hydro projects are environmentally and economically feasible in Vermont.

Kim Greenwood, the water program director at the Vermont Natural Resources Council, believes it’s a short list. Her organization, which typically fights new dams and large-scale hydro, has not taken a position on the legislation.

“It’s great if it does [work] in a way that doesn’t add new dams and new impact, but I’m just not that hopeful that the potential exists in Vermont,” she says. “We just all really want this to work, but I just don’t think it’s going to happen.”

According to DPS and ANR reports, 11 percent of Vermont’s current power supply already comes from roughly 80 existing in-state hydroelectric stations. That doesn’t include eight TransCanada-owned facilities on the Connecticut River — technically in neighboring New Hampshire — or the 30 percent of the state’s power supply piped in from Hydro-Québec’s massive facilities north of the border.

Even Barg admits, “The cherries have been picked.”

A number of studies conducted in recent years has come up with wildly divergent estimates of how much undeveloped hydro potential exists in the state. One pie-in-the-sky U.S. Department of Energy report came up with 1201 potential sites — but that relied purely on physical data and included many undammed locations. The most conservative of the studies — conducted by ANR and eliminating breached and other unsuitable dams — found just 44 potential commercial sites that could collectively provide just 25 megawatts of power.

Some of those sites are already being explored.

Bill Scully, a Bennington restaurateur who bought the remnants of the Vermont Tissue Mill in 2009, has spent years seeking approval to turn the site into a 1.3-megawatt hydro station. He hopes to have the project licensed this summer and, best-case scenario, up and running next spring.

Derby Line dairy farmers Jonathan and Jayne Chase are working to build an 850-kilowatt station on a dammed section of the Missisquoi River in Troy. Their project is one of just four to receive ANR approval in recent years — two of the others are Barg’s West River facilities — though they are still awaiting final FERC approval.

Jonathan Chase says he and his wife worked hard to lay the groundwork for their project by reaching out to government agencies and nongovernmental groups alike. Even so, the project was significantly delayed when FERC at one point ruled against it; the Chases appealed the ruling and won.

“It’s not for the weak of heart,” Chase said of the current regulatory environment. “You gotta have … a lot of guts to take it on the way the rules are currently structured.”

So far, the pending legislation has garnered little, if any, opposition. According to Andy Perchlik, director of the clean energy development fund at the Department of Public Service, that’s because the bill expedites — not dismantles — the existing regulatory structure.

“It’s not changing the science behind the permit process,” Perchlik says.

That’s important to Sandy Levine, senior attorney for the Conservation Law Foundation, which also has yet to take a position on the bill. She argues that just because Vermont’s past is firmly rooted in hydro doesn’t mean its future should be, too.

“Historically, Vermont has probably overbuilt our hydro resources, going back to the 1800s when nearly every river was dammed,” she says. “Many of those dams are very damaging to the environment. They completely block fish passage and drastically change the ecosystem of the rivers.

“Going forward, any dam or hydro project should be approved only when it safeguards the environmental resources,” Levine says.