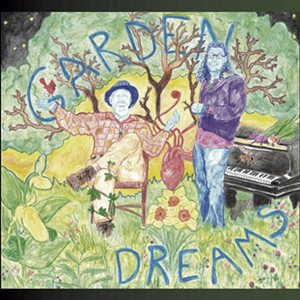 I became lost in the woods of Underhill one day, trying to find a path I knew when I was young. My decades-old recollections failed me, so I just kept hiking as my canine companion started to look at me doubtfully.

Strangely, I never really felt lost, and I didn't care that I didn't know where I was. I was content to stand among the frost-laden branches and watch the sun make the snow shine like pearl. I felt hyperaware of the present in that moment.

That sensation and spirit suffuses Aaron Marcus' latest collection of piano compositions, Garden Dreams, on which the Montpelier musician collaborated with former Vermont Public Radio host/engineer Sam Sanders. The two curate a collection of work by Vermont poets — plus cameos from Emily Dickinson and Tennessee Williams — which Sanders reads in an easygoing, casually frank tone. The Montpelier-based Sanders wields the poems as if they were his own, his voice resonant with a hint of world weariness.

Marcus is a talented composer and pianist who plays with folk act Frost & Fire, a band with an emphasis on folk and contra dance music. Here, Marcus' compositions are lighthearted, playing like a sort of summer reverie. The artist, who uses they/them pronouns, displays the ability to move seamlessly between genres. That dynamic nature empowers Marcus to move with the moods within the selected poetry, a subtle dance between word and note.

On "The Cat's Morning Song/Meg's Polska — Hot Pink, Plastic Sled/Tiny Robot Dance," Marcus and Sanders take Montpelier-based poet and musician Susan Reid's poem about her cat and color in the margins. The song becomes a score, a soundtrack to Reid's cat as it contemplates its salad days.

"I cry now and then / For the open door, for the young, lean days / For desire of the sweet, long-ago hunt," Sanders reads in a wistful tone, as if looking over an old photo album. "I know you understand / I've heard you cry too."

Throughout the record, Marcus expertly uses their piano to create mood. "Imagine That," also by Reid, features some of Marcus' most playful arrangements. Waves of piano figures pull back like low tide to allow Sanders' voice and Reid's words to take the spotlight. It's a dance that Marcus and Sanders navigate tastefully.

"Let Us Imagine" features a guest orator — Ama Peyman, a local farmer and chef. Her poem is described in the album's liner notes as "an Afrofuturist vision, filled with hope for all of our children." As Marcus lays down an optimistic-sounding bedrock of notes, Peyman tells of her dream of restorative justice and living in peace.

Though poetry and music have often been intertwined, what Marcus and Sanders achieve with Garden Dreams is its own kind of magic. The music is composed and arranged in such a way as to draw attention to the words of the poets, yet it never comes across as background music. It feels more like documenting life as it happens.

Garden Dreams is available at aaronmarcus.bandcamp.com, or at Buch Spieler Records in Montpelier.