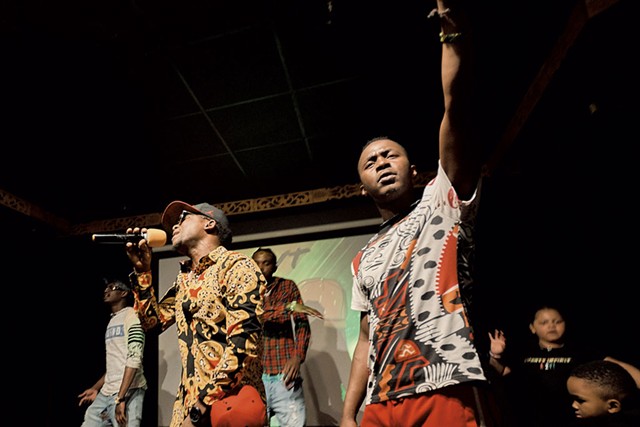 In 2012, the City of Winooski got a new, unofficial motto: "Winooski, my town." The simple catchphrase, meant as a symbol of pride as well as a statement of residence, came from a song of the same name by A2VT, a local global-pop band composed of three young African refugees. The song's music video went viral in Vermont, launching the young upstarts to regional notoriety.

The track was the most popular single from the band's debut album, Africa, Vermont, the title of which underscored the concept behind the pop-hybrid group. The young men, Said Bulle, George Mnyonge and Cadoux Fanoy, were at the center of a cultural crossroads after arriving in Vermont as teenagers in the early aughts. Their well-received debut earned the band a noteworthy place in the burgeoning Chittenden County refugee community.

After a nearly eight-year gap, A2VT have just released their long-awaited sophomore LP, Twenty Infinity. With faster tempos and catchier hooks than its predecessor, the record marks an overall push into upbeat dance music and opens a new chapter in the group's continuing fish-out-of-water story. Now primarily a two-piece with Bulle and Mnyonge — who, in the context of the band, go by Jilib and Pogi, respectively — A2VT feel they've come into their own artistically with the release of the new album.

"On the first record, I was still like, What are we doing here?" recalls Bulle while hanging out at Creamy Goodness, a Burlington recording studio owned by A2VT general manager David Cooper.

Cooper is a longtime music engineer and member of the local tribute band Mellow Yellow who moved to Vermont in 2007. He was essential to launching A2VT's career, acting as the band's mentor, producer, audio tech and creative consultant since before the group had a name.

"Then, they were novices with a lot of passion and desire and no experience," he says of the nascent group. "Now, they're seasoned professionals. They know exactly what they're doing."

Bulle and Mnyonge say that confidence comes from age and experience, as well as growing into their roles as family and community leaders.

Bulle, now 31 and a father of three, says that he's become a role model for his extended family members, many of whom still live in Somalia, where he's originally from. Bulle laughs as he explains that his family in Africa thinks that because he lives in America and can be seen in music videos on YouTube, he must be wealthy.

Mnyonge, 29, who was born in Tanzania, notes a change in the attitudes of local refugee youth from when he was a teenager, perhaps in part due to the influence of A2VT.

"Before, I used to fight a lot," he says. In his teen years, he says, it was common to get into multiple altercations on his relatively quick walk from home to Winooski High School.

"What I'm seeing right now: Nobody's fighting, and the kids do good in school," he notes. "And they're trying to be like me and do music."

Mnyonge goes on to explain that A2VT's first album "was just a trial." But of the new one, he says, "It's crazy."

The biggest difference between Africa, Vermont and Twenty Infinity is energy. While hardly a chilled-out affair, the debut album had a relaxed atmosphere, emphasizing traditional hip-hop beats and downtempo vibes. But Twenty Infinity's opening track, "Halima," makes it clear that A2VT want listeners to get up on their feet.

"From the beginning, I had this dream that I wanted to be a musician and make people dance," says Bulle.

"Halima," which was originally written as a wedding song for a bride of the same name, is a hyped-up monster of sound. Crisper and cleaner than anything A2VT released previously, the celebratory opening song exemplifies the new sonic space the band now occupies. The synth-driven jam vibrates with pure vigor, its hybrid beats nodding to both American club music and traditional African rhythms, a motif heard throughout.

For inspiration, Bulle and Mnyonge look to major African stars such as Diamond Platnumz and Davido, artists who make candy-coated pop that connects 21st-century R&B, trap and hip-hop to their individual African cultures.

A2VT do so by continuing to write in English as well as Swahili and Maay Maay and, sometimes, a combination they refer to as "Swahenglish." Cooper says that when he first met the A2VT crew, they were "between languages."

A2VT also stay connected to their roots through their songs' subject matter. "Wave Your Flag," a lead single released in 2019, is emblematic of the group's vision and philosophy. The song, which is largely sung in English by guest vocalist Meax, details not only the plight of refugees but that of marginalized people from all over the world.

"Nobody knows what we go through / To make a difference / To make a change in this world / Takes patience / The upper class tryn' to bring us down / They don't understand / To be happy / We must make change," Meax sings.

"Whatever we do, they're gonna do it, too. Why not teach them good things?" George Mnyonge tweet this

The Ken French-directed music video features body-painted dancers superimposed atop the flags of the Democratic Republic of the Congo, Ghana, Mozambique, Somalia and other African nations intercut with protest footage, shots of refugee camps and scenes of African natural beauty.

"We don't want to show the kids bad things," Mnyonge says. "Whatever we do, they're gonna do it, too. Why not teach them good things?"

"When you're an artist, every message you write is truth," Bulle says.

The song and video exhibit pure pride and joy. A similar purity, albeit one of romantic love, fills the group's latest visuals for single "You Ma Numba 1." The summery clip oozes warmth and togetherness while a four-on-the-floor beat contrasts the plucky, syncopated rhythm of the lyrics.

A2VT's positive messaging has made the group a popular pick to perform at Vermont schools. Often in connection with diversity days or racial justice awareness programs, A2VT perform for students all over Vermont. They also share stories of their lives before and after their move to the United States. Cooper says that the kids react like young fans screaming for the Beatles on "The Ed Sullivan Show."

To celebrate the album's release, A2VT recently hosted a party at Burlington's North End Studios. About 70 people turned up despite zero-degree weather. But rather than a typical music concert, the night had a loose feeling of fellowship. Backup dancers and guest vocalists accompanied the group, but, at certain points in the evening, audience members spontaneously joined the artists onstage — including Bulle's 3-year-old son. It seemed that anyone was welcome to do so.

"I see them winning hearts and minds, connecting with the community," says Cooper. "That's the work they're here to do."