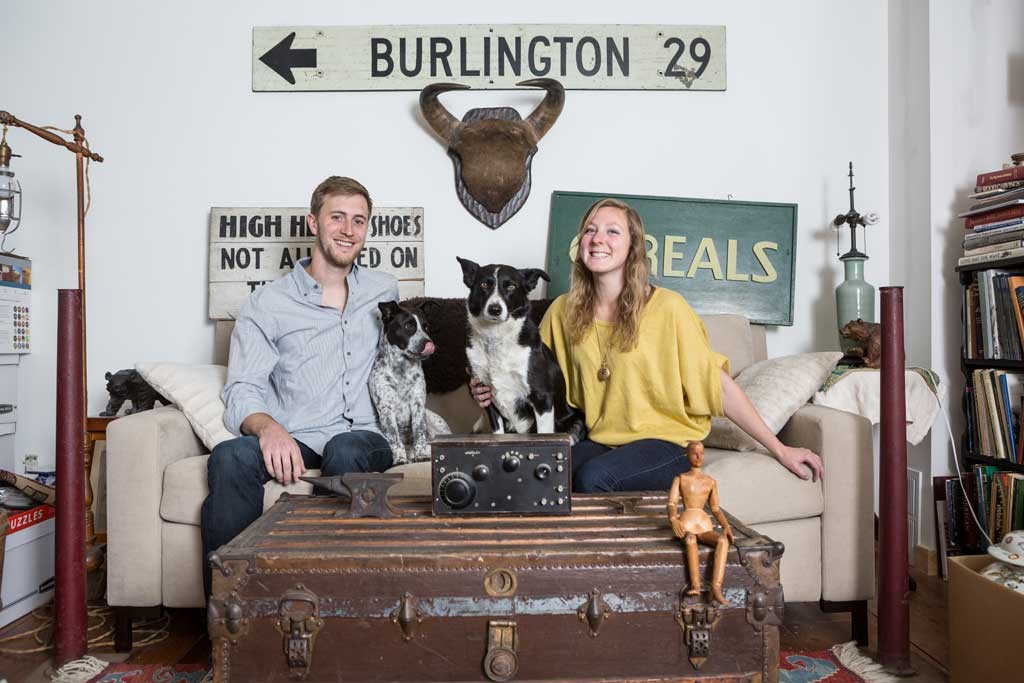 Jenny Jacobson met Brian Bittner in 2009, when she moved into the Hayward Street apartment inhabited by Brian and mutual friends in Burlington's South End. She was an art teacher in the Colchester school district; he was two years into developing a full-time antiques business.

"As long as she's known me, she's been surrounded by all this stuff," says Bittner, 27, a native of Burlington who was raised in Chester, and a third-generation antiquer.

"When Jenny moved in, it must've been within two months that I bought a collection of maybe 50,000 postcards," he remembers. "Like, 40 shoeboxes full of postcards that all landed in the living room, and I'm the type that has to look at every one, because that next one might be ... worth $500."

Brian and Jenny married in 2012, and both have been running the business he started, Bittner Antiques, since last June. The couple recently purchased a home on Front Street in Burlington, which they've renovated, restored and stocked with antiques. "We just decided to go for it," Jenny [now Bittner], 31, says. "We'd just bought this house, and it seemed like a good idea — and it was."

Bittner Antiques' storefront is based in that house, where the couple lives with two dogs. On a recent visit, the house is tastefully decorated with some of the Bittners' favorite finds, and the rooms have a bright, airy feel. Century-old Vermont road signs adorn the kitchen walls. So does a wooden folk-art sign from about 1910 advertising Otishill Farm and depicting a hand-carved pig standing by a fence. Antique mugs rest casually on the couple's brand-new kitchen counter. A buffalo head preserved by a taxidermist hangs on the living room wall.

Several other rooms hold more of the Bittners' stock: pocket watches stored in boxes, stacks of antique photographs, old tools. Just about everything in the house is for sale.

The couple plans to make buying and selling old things their life's work. "It doesn't scare me at all," says Brian, who grew up helping his dad, George, and granddad, Jack, at auctions and antique shows across Vermont. For young people to enter the antiques trade full time, though, is a rarity. "[At shows] we are often half the age of the second-youngest person in the room," Brian adds.

On Friday, April 25, the Bittners will up the antiques ante: They'll hold their first auction at the Hampton Inn in Colchester. Brian's longtime friend Joshua Steenburgh, of New Hampshire-based Steenburgh Auctioneers, will call the event. If all goes well, the Bittners will hold another one in the fall, thus beginning a tradition of twice-yearly auctions in the Burlington area. It would be a noteworthy addition to the local auction scene, long dominated by Duane Merrill & Company Auctioneers & Appraisers and Thomas Hirchak Company, which both have offices in Williston.

"It's surprising that Burlington doesn't have a stronger antiques scene," says Brian, who estimates there are "only 10 to 15 dealers who are very active in Vermont." The midcentury modern and vintage markets are much stronger — and the Bittners believe the area could sustain a more robust antiques market.

Transforming Bittner Antiques into an auction business is a personal milestone for its owners, who say they've been working toward that goal for several years. Their auction next week will offer 350 to 400 lots, with items including folk art, handcrafted signs, tools, hardware and a wide range of household objects. "We often say [Bittner Antiques focuses on] 'early Americana,' but there were millions and millions of people living a hundred years ago, and it's all their household stuff," Brian notes.

While many antiques dealers focus intently on, say, mid-19th-century farm tools or early-20th-century signposts, Brian prefers not to specialize. "I tend to have more of an eclectic mix of esoteric categories. It's impossible to know everything, so what I try to do is be a generalist," he says. "I remember thinking this from a very young age: Know a little bit about a lot."

Though the Bittners and Steenburgh acquired many of the lots featured in the sale, they'll also auction items on consignment from other dealers.

"Almost everything is going to sell for whatever price it brings that day," Brian says. "We're not going to be using any reserves on items — saying that an item has to sell for a certain price or it doesn't sell — which is an appealing thing for dealers, collectors and the public, too. They can come and potentially get a very good deal on something."

Of course, that's a risk for the seller. But the Bittners are optimistic that the lots will move; they've put word out through their business contacts, social media channels, and their own and other auction websites. Their debut sale is already generating buzz and positive feedback. "We're expecting a good crowd," Brian says. "There is a lot of interest. Nobody's named any numbers, but a lot of strong dealers have expressed an interest in these items."

Plus, as the couple points out, auctions are free events that give attendees a chance to encounter rare, historic items, even if they never make a purchase.

"The antiques market allows you to handle objects that are of the quality of museum items at times," notes Brian, casually passing a ceramic Greek vessel from the fourth century BCE across his kitchen counter to prove the point. "There's a fingerprint on the bottom by the potter, which is just really neat to me," he adds. "That person lived 2,500 years ago. It's kind of incredible."

Brian is what one might call an antiques purist: Though words like "vintage," "retro" and "antique" are tossed around in stores and online marketing fairly interchangeably, Brian adheres to the traditional standard that an item must be 100 years old to qualify as "antique." That's likely a result of growing up in the business; the buying-and-selling bug bit him at the tender age of 10.

As he recalls, one day Brian was helping his grandfather at an estate auction near Thetford, running small items to and from the tables. "My brother and I would get paid two bucks an hour, and Grandpa used to give us a hard time," he says with a laugh. "He used to say how much he was paying us, because when he was growing up, he was making 10 cents an hour, or something like that."

Brian had asked an aunt to bid on several items for him as he ran around completing his tasks. At the end of the day, he had acquired a box of books. "I thought it would be a great idea to buy the whole box and then sell them piece by piece," he says. "When my work was done, I took this box of books, and I sat down right in the middle of the [auction] aisle and started selling the books one by one. I must have made a little profit — before I got scolded by my grandfather and my dad, who assured me that that was not appropriate."

After that, Brian was hooked. As teenagers, he and his older brother, Eric, would go to yard sales on the weekend. He's had a stash of antiques — formerly stored in his father's house — for as long as he can remember. Since he moved to Burlington in 2007 at age 20, Brian hasn't worked another full-time job. His goal all along was to have his own antiques auction business.

"I'm not just saying this because he's my husband: I've literally never met anyone who loves their job as much as Brian," says Jenny, who has a bachelor's in art history and a master's in art education. For her, the appeal of the business lies in the aesthetics of the antiques.

"Jenny's been a great resource for me," Brian notes. "I get into tunnel vision, like, Pocket watches! And I forget about things that, like, just anyone would want to use to decorate their house."

Bittner Antiques is thriving, the couple says, now that it commands their full attention. "I think our business works because it's multifaceted," Jenny notes. The Bittners make house calls, scour regional markets, and buy and sell online.

Recently, they've been on a tear of buying and selling hand-painted signposts, and they've identified certain niches — such as, yes, antique pocket watches — that are time-effective and garner more predictable sales, based on their expertise in the area. (Last year Brian bought and sold 5,000 pocket watches ranging from $5 to $120.) The Bittners recently attended a three-week show in rural Texas that boasts more than 3,000 vendors, where they both bought and sold antiques.

The couple hopes that their April 25 auction and ones to follow will put them on the map of Vermont antiquing. And they're already looking to the future.

"I think it'd be great to have an auction house on Pine Street," Brian suggests. "A warehouse where we could store all the things but also where we could hold auctions. I see the South End being a great, revitalized area in town. To be part of that would be nice."