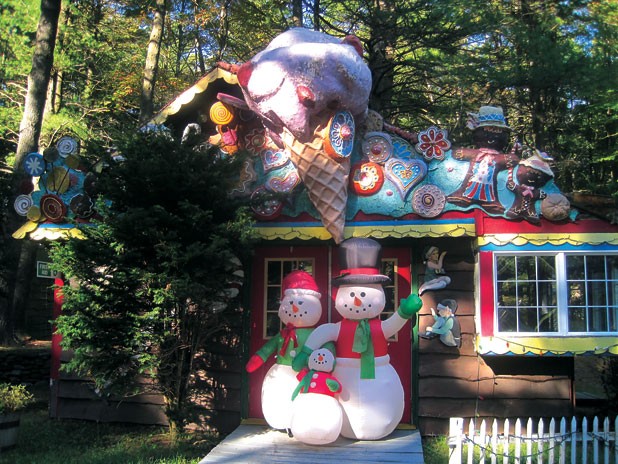 In 2012, Vermonters had the opportunity to buy off what was left of Santa’s Land. After 55 years of operation, the longtime owners of the Putney theme park had decided to close its doors.

The auction was canceled when an anonymous benefactor purchased the park, leading to speculation — and satire. In Seven Days, Ken Picard and cartoonist Tim Newcomb teamed up to visualize what would happen if Gov. Peter Shumlin bought Santa’s Land and transformed it into “Shumland.”

Reality very nearly got even stranger. Last summer, WWE wrestler and author Mick Foley, famous for his Christmas fetish, admitted to fans on Reddit that he’d seriously considered purchasing Santa’s Land. The only thing stopping him, said Foley, was his lack of confidence that he’d be able to take care of the park’s animals while he was away on the mat.

In the end, it was the local Billewicz family, led by matriarch Lillian, which purchased the park and reopened it in the summer of 2013. “I am the mother of two boys and I hold fast to tradition and traditional family values,” Billewicz told Seven Days via email. She added that she’d been interested in buying Santa’s Land for a while and jumped on the opportunity to take advantage of a grandfathered zoning clause the property would lose at auction.

For this Winter Preview issue, we found it only natural to visit Old Saint Nick at the 42-acre park, which is open every weekend through December 22. No matter that our party had no children, a delightfully kitschy time was had by all.

On a recent Sunday afternoon, only a few other cars occupied Santa’s parking lot, located just behind a vintage sculpture of Kris Kringle perched on alphabet blocks with the letters “S” and “L.”

The park dates back to 1957, when Jack Poppele of Newark, N.J., found the perfect pine grove in which to place his dream destination. A pioneering radio man, Poppele always had a special place in his heart for Christmas. In 1922, he had inaugurated New York news and talk station WOR with a one-man broadcast on Christmas Day.

Not much has changed at Santa’s Land since 1957, making it a time capsule of far more innocent days. But that innocence has its limits — Santa is, at his core, all about commercialism. To enter the park, families must pass teenage gatekeepers sporting Santa hats at the gift-shop cash register. Admission is $10, up from the original 19 cents but still a pittance. Kids younger than 3 enter free, as can military members and veterans.

The outsize store mostly focuses on toys, candy and Christmas ornaments and crèches, though it also offers some menorahs and Hanukah trivia books for the Chosen People.

But shopping wasn’t our mission. I tromped out of the store and onto the paved path toward the park entrance, where I encountered … a clown’s grave?

Just off the main path, past a white picket fence lined with Christmas wreaths, sat the bust of a clown with Xs for eyes and a mouth opened in a silent scream. The spooky head was perched on a tree stump with flowers growing at its base. Perhaps it had been part of a trash can or carnival game in another life. Despite the serene backdrop of a shimmering pond, this strange remnant set the right dissonant tone for the show to follow.

Not far from where this Putney Pagliacci moaned his last, Humpty Dumpty — a more appropriate reminder of the park’s naïve origins — smiled and raised his arms before his fall. The old-timey statue was well preserved and appeared to have been recently repainted. (Lillian Billewicz did not respond to our questions about the property’s condition.)

The official entrance to Santa’s Land was marked by a new-looking sign depicting a giant book, its pages open to the famous 1897 letter from Virginia O’Hanlon asking the editor of the New York Sun if there was a Santa Claus. His reply was reproduced, as well: “[T]here is a veil covering the unseen world which not the strongest man, nor even the united strength of all the strongest men that ever lived, could tear apart,” editor Francis Pharcellus Church assured the girl and his readers.

In the temporal sphere, Santa’s Land beckoned, just past Santa’s Sweetheart Bridge. A walk through the candy-colored covered bridge revealed why it was advertised as such: In the relative dark, rows of tinsel offered a hint of privacy. A perverted wooden elf hid in the rafters, waiting to spy on lovers in flagrante.

The first building in the village was the post office, once a cool-down area where kids could send letters to Santa, play with “quiet toys” and read, according to signs left over from its active days. Now, however, the musty-smelling room was empty except for gardeners’ knee pads lining the floors. A sign just outside warned parents, “Please remember you are responsible for your children. Please stay with them at all times — Santa.” Apparently Santa expected parents to know enough not to let the little ones into the dark, unlocked post office.

While they didn’t venture in, a group of kids we observed seemed infinitely amused by the outside of the building, which was lined with distorted mirrors. They even enjoyed the one boarded over with a broken piece of mossy wood.

This was not the only evidence we encountered of Santa’s Land’s return to nature. Fallen leaves filled carriages provided for small children. Pine needles, seemingly from years of autumns, covered the roofs of buildings such as the elves’ lodgings and Santa’s Deersmith Shop. Cages where exotic animals once spent their summers were now populated only by less exotic weeds.

My companion on the trip would later tell me that thinking about the park made him sad. I found it eerily beautiful, like Ozymandias’ shattered monument. Even Santa, it seems, is not immortal.

But enough dreary philosophy — we still had goats to pet. For now, Santa’s Land was home to “the Goat Girls” — Emma, Willow, Sandy, Phoenix, Mary and Blossom — on loan from Hillman Farm in Colrain, Mass. The ladies were in fine spirits, eager for a good petting even more than a snack, and were uncommonly friendly and gentle, as if they’d been raised specifically to delight children.

Up the path, we encountered some of those kids: The family that had enjoyed the post-office mirrors was now reveling in the playground, lined with animal paddocks. The critters themselves were mostly no-shows, perhaps gone back to the real North Pole for the winter.

But an emu stalked its turf, looking every bit the velociraptor it likely saw itself in its ancestral mind’s eye. I watched the animal’s fierce yellow eyes from my seat on a springy, truck-shaped toy, while my partner tried to balance his adult frame on a pint-size metal buffalo.

Grown-ups that we are, it was still a thrill to enter Santa’s home. Inside, an elderly man rested in his throne, inches away from a mighty electric fan. “I don’t want to kill you, so I’ll sit on the arm of the chair instead of your lap,” I told him as I posed for a picture.

When actual children made their way to Santa’s lair, I heard him offering them candy and asking them what they wanted for Christmas — favors with which we hadn’t been honored. I hope civil-rights attorney Gloria Allred is primed for my call.

After a conversation with some potbellied pigs who chose not to leave their elfin-style home, and a pair of photogenic but elderly llamas, we were parched. I ordered water, my companion a Diet Coke. For an extra $2, the drinks came in a “Santa Sipper,” a red plastic bottle shaped like Santa. We didn’t shell out, but the young gentleman doling out kielbasi kebabs and burgers said he’d noticed me eyeing the bottles and offered one free. Now, that’s Christmas spirit.

The same good nature seemed pervasive among the Santa’s Land staff. The young man running the rides — which include a vintage Theel carousel — talked with each group about what brought them to Santa’s Land, and took care strapping small children safely onto the bobbing horses.

I would have liked to take a trip down the Iceberg Slide, eternal home to a very cute 1950s rendering of a giant white mouse. But it was surrounded by yellow police tape. Maybe that’s where the clown died.

Instead, we mounted potato sacks and slid down the polished pink “Alpine” slide. We could have done it all day, especially since we couldn’t board the park’s kid-size train, which didn’t seem to be running. But there were still animals to be seen — namely, a trio of very excitable donkeys and a herd of fallow deer.

We ended our day in the silence of the Deer Farm. The ruminants were wary of us, so we gave them their space. We enjoyed their presence from a distance and soaked in the stillness of nature reclaimed.

Will the Alpine-kitsch houses of Santa’s Land be restored? Perhaps in time. But in its current strange purgatory of elements new and old, living and dead, Santa’s Land has a magic all its own. There, children, adults and deer can all run free (or relatively so) beneath the veil of the “unseen world.”