A Writer Gathers Wild Leeks by the Roadside 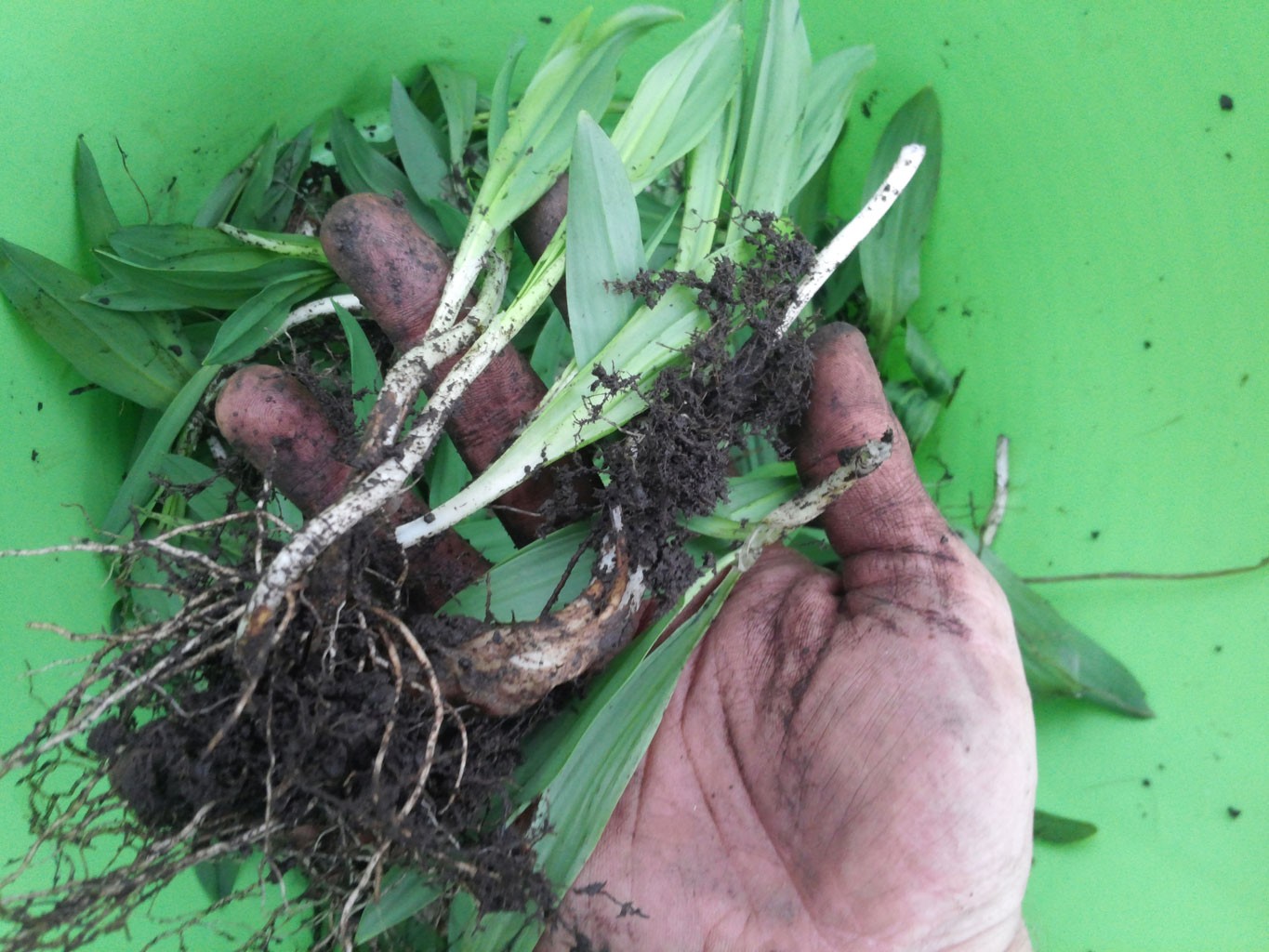 On a recent Tuesday, I clambered down a hillside that had somehow escaped the worst of the rains that had engorged the White River, which raced just a hundred feet below me. The soil was, fortunately, not too slippery, damp or crumbly, providing the ideal growing conditions for the object of my quest: ramps.

I'd been introduced to ramps' garlicky zing about 10 years ago, when I lived in Wisconsin. There, as in Vermont, these delicious, oniony plants were enthusiastically celebrated not just for their toothsomeness but for their portending of spring after the too-long winter. Now, I crave them every April.

Ramps — also known as wild leeks (or not; more on that later), ramson, wild garlic and other names — smell like garlic and taste like fresh, garlicky onions. They're fantastic in salads, omelettes, sauces and all kinds of savory dishes. They're also one of the first wild edibles to ripen every year, maturing rapidly in the late winter to beat out even such early risers as asparagus.

Ramps grow in a wide range that encompasses most of the eastern U.S. and Canada, but they do not grow just anywhere. To pluck these delicacies, you need to find a "ramping ground": a site where, when conditions are right, the ramps will, if you'll pardon the expression, run rampant.

That's why I found myself on a roadside hill in central Vermont on a meteorologically temperamental day in mid-April. I'd gotten a good tip about where to find the key ingredient for the dinner I'd planned for that night. With my little green bucket in hand, I was going ramping.

I recently moved to Vermont from Brooklyn, where gathering wild edibles is nearly impossible. (I did often spy purslane — aka pigweed — a delicious complement to salads and beans, growing alongside fences and curbs, but I don't like my foods doused in dog urine, thank you very much.) My wife, Laura, and I once took an enjoyable foraging tour through Central Park, where our guide, "Wildman" Steve Brill, showed us how to recognize and pluck a variety of wild urban victuals. Since that time, I've been more cognizant of and interested in tracking down feral foods.

That said, I'd never put much effort into the task. The arrival of spring and my residence in a far more rural area — not to mention the pressure of coming up with story ideas for this Food Issue — were all I needed to go ramping in earnest.

Well, actually, I needed more than that. I needed confirmation that, by mid-April, after a long, cold winter, the ramps would be available for the plucking. Ramps are easy enough to spot, and a quick sniff will confirm their identity. But before I could fill my bucket with ramps, I needed to know where to look for the damn things. So I called Nova Kim.

Kim and her husband, Les Hook, are the éminences grises of Vermont wildcrafting: the collection and consumption of wild (that is, not cultivated) foods. For several decades, they've been the state's experts on where to find such comestibles. If anyone would know where to find ramps, they would. But would they share with me the locations of their ramping grounds?

They would, and they did. Kim and Hook were most gracious, suggesting two locations, each about 70 miles from Burlington, that had reliably produced ramps for as long as they could remember. They also clarified a few misconceptions for me, the first of which has to do with the word "foraging."

Though she knew I meant no harm when I used it in our conversation, Kim said she finds this term "derogatory," preferring the all-encompassing "hunting and gathering" or the somewhat more chic "wildcrafting."

For my own part, I think I'll stick with "gathering" or "collecting," since "wildcrafting" implies that something is created in the process. I did cook dinner with those ramps later, but, at the moment of plucking them, I didn't craft anything from them. If anything, I unmade something in tugging them roughly from the damp earth. 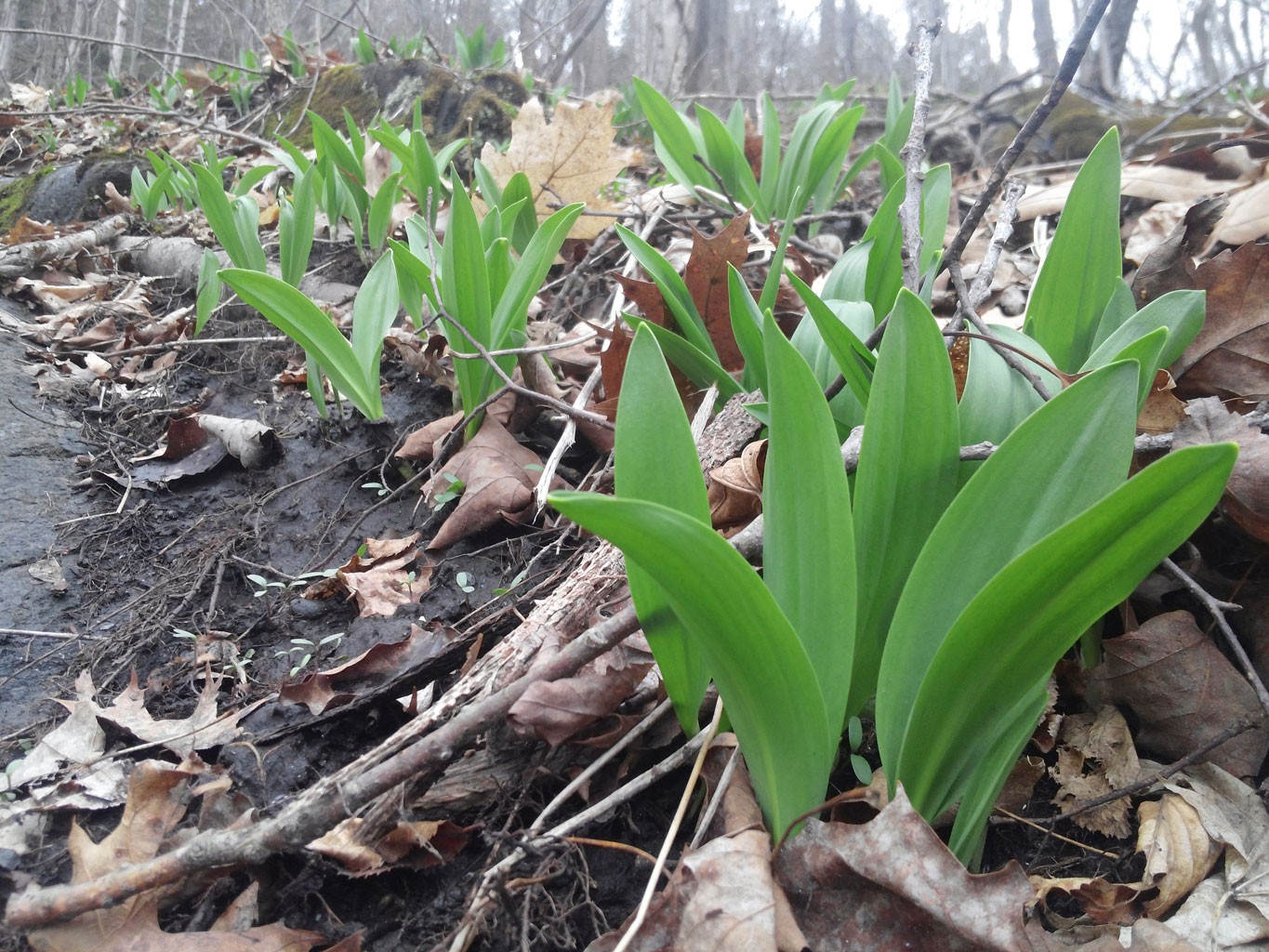 The other thing Kim and Hook pointed out was the difference between ramps and wild leeks. Ramps, Kim said, are "the red-throated ones," while the plants with white throats are wild leeks. Though most online sources seem not to differentiate between the two plants, I submit that few people know more about such things than Nova Kim and Les Hook.

Here, then, I must confess that I've used the term "ramps" inaccurately, and for the sake of a crummy pun or two. I was not ramping. I was leeking. But since that sounds like grounds for consulting a urologist, with apologies to Kim and Hook, I'll continue to refer to these plants by the general "family" name, ramps.

I will not, however, betray the couple's trust by revealing the locations they shared with me. I'll say only that it took me a little more than an hour to drive there from Burlington, that the ramps grow on a patch of land near both the road and the White River, and that the patch is a bit tricky to find.

So tricky, in fact, that I had to call Kim from the roadside for clarification. I felt like an idiot — cellphone in one hand, little (empty) green bucket in the other — but Kim did not pass judgment.

I reoriented myself, crossed the road and almost immediately located the happy ramping ground. From that point, it was easy. The plants had arranged themselves in neat little clusters and rows. They seemed practically begging me to pluck them.

These wild leeks, a bit smaller than the ones I used to eat in Wisconsin, offered little resistance. I needed no tools besides my hands to uproot them. The soil's cold squishiness and robust aroma were invigorating.

Within 20 minutes, my bucket was half full, and that seemed like enough ramps for one visit. Charlie Rich's version of "I Washed My Hands in Muddy Water" played through my mind as I did just that, stepping down to the riverbank to wash the mud from my hands.

The White River, at that moment, was not being particularly true to its name. It was muddy brown and churned fast with thousands of gallons of snowmelt. It reminded me of the chocolate river in Charlie and the Chocolate Factory. Though I was in no danger, I had visions of becoming the next Augustus Gloop. Time to head back.

That evening, after a laborious rinsing and derooting procedure (both stalks and leaves are edible), the wild leeks made their way from bucket to plates. A couple of friends came over for dinner and spoke highly of the pierogi that I stuffed with potato, sausage, cheese, sautéed onion and ramps; I also quickly made up a sour-cream-and-ramp dressing for the dish.

Ramps impart a zingy, leafy punch to a great many dishes. I like them raw (in salads and sandwiches) just as well as cooked; they're lovely sautéed briefly in a little chili oil and then added to rice, soups, sauces, omelettes and burgers, among other foods. Fortunately, I picked quite a lot of them, so the culinary rampage continues at home.

I had passed the bucket around the office earlier that day. One colleague told me she used ramps to, er, ramp up the flavor of eggs and rice; another gave a dish of cold peanut soba noodles some pizzazz with raw ramp slices. "They definitely livened things up," she emailed, "although next time I think I'll sauté them briefly to slightly temper their garlicky bite."

Local restaurants are quick to get in on the ramp act, too, trumpeting their emphasis on locally sourced foods. My colleague, food writer Alice Levitt, writes in an email, "Ramps always start popping up on menus just as they poke out of the ground. Despite a slow start to the spring, I'm starting to see them hit fine-dining menus, including several featured for Vermont Restaurant Week."

Restaurants may have their sources for wild leeks, but the ramp-hungry home cook will have to find his or her own ramping ground — or wait a while. A quick check with the produce department at Burlington's City Market confirms that ramps won't be on the shelves until mid-May.

If you can get your hands on some, though, you'll find that ramps have another benefit, beyond their versatility and deliciousness: They signal that spring is truly on its way.

The original print version of this article was headlined "Happy Ramper"