A Wrinkle in Space and Time 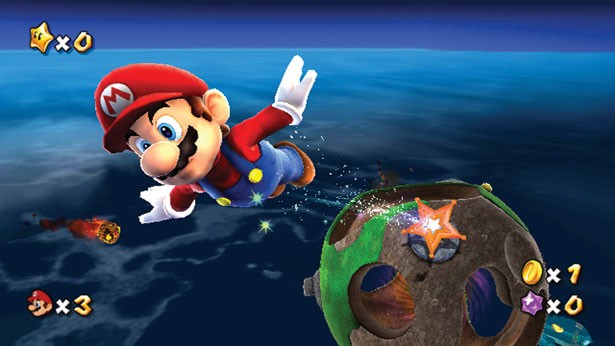 Gamers weaned on the rudimentary 3-D of the "Myst" worlds and raised to expect the sophisticated realism of "Far Cry" may wonder about the new games "Super Mario Galaxy" and "Portal."

After years of pretending to race cars, toss pro balls and kill aliens, game developers have started to get weird. Both "Galaxy" and "Portal" get back to an older gaming tradition by providing whacked-out fun that treads lightly where the rules of physics should apply.

Gravity and perspective become optional as Mario lands on tiny planetoids, spheroids and floating levels that defy any sort of premeditated navigation. These places make sense only in reference to themselves. As he walks around on an orb the size of a hot-air balloon, up and down become relative: Mario's feet stick to the surface as if gravity were in full force. Then there's a puzzle world that flips up and down as Mario traverses different-colored bricks. While they're disorienting at first, these wacky gravity spaces brighten up a routinely entertaining "Mario" title.

Gamers may pick up "The Orange Box" for its collection of three complete "Half-Life 2" games or for the high-energy combat of "Team Fortress 2." But most players end up staying for "Portal." This peculiar puzzle-solving game takes place in more or less the same high-tech, 3-D world as "Half-Life." Instead of battling creepy aliens, though, players are challenged to maneuver through complex and deadly levels using nothing more than a device that can project two portals on any concrete surface - you walk through one portal and come out the other, Alice in Wonderland-style.

"Galaxy" and "Portal" don't deserve credit for being the first games to play with time and space. Ever since players of "Asteroids" zoomed off the top of the screen, only to reappear at the bottom, games have messed with the fabric of reality. At their best, that's what games do. These new titles remind us that the medium still has the potential to find fun and wonderment in the strangest places.

Who's It For: By kicking creativity up a notch, "Portal" and "Super Mario Galaxy" can entertain both the jaded gamer and the newcomer.?

If You Like This, Try That: "Prey" pitted players against an entire spaceship full of space-warping aliens. It involved running up and down walls, shrinking, and teleporting around the intergalactic structure, and effectively mixed the disorientation into a genuinely exciting and disturbing first-person adventure.?

Best Part: "Portal" includes a feature sure to catch on and show up in other games - developer commentary. When this is turned on, players can revisit completed levels and click on special icons to hear the title's developers and designers give a behind-the-scenes account of the game.