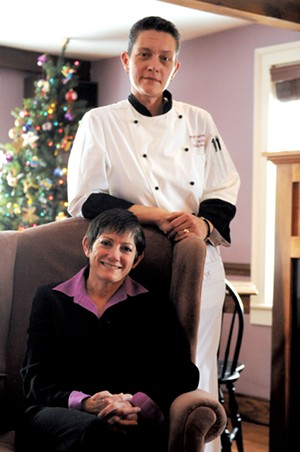 The following story requires a disclaimer: The dishes described therein will probably never exist again. I ate them and they are gone. Chef Jevgenija Saromova has since moved on to new creations. And that's one of the reasons to love the remade Lincoln Inn & Restaurant at the Covered Bridge in Woodstock. An artist in heart and temperament, Saromova says she would be bored if she didn't overhaul her menu every single day.

Alas for those diners who will never enjoy, as I did, the pile of pulled-duck confit and fork-tender smoked breast served with an artfully layered press of paper-thin apple and celeriac. Nor will they experience an earthy cake of lentils and barley that whisper of Saromova's Latvian origin, contrasted with a sweet plate full of blackberries and a wreath of shaved plum.

But future diners at the Lincoln Inn have a consolation: They'll get to eat whatever strikes Saromova's fancy next.

Saromova arrived in Vermont from England this past September 11. Sixteen days later, she and innkeeper Mara Mehlman opened the restaurant at the Lincoln Inn, formerly home to Mangowood Restaurant. Their concept is new to Vermont: "In England, it's called a 'restaurant with rooms,'" explains Mehlman. "They're award-winning boutique places with Michelin-starred restaurants. People go to stay there for the food."

Saromova is well versed in that English restaurant model: She has been sous-chef at the Michelin-starred Yorke Arms in Yorkshire, which bills itself as "one of the UK's leading Restaurant with Rooms." Her first executive chef position brought her to another restaurant on the same model — No. 5 Restaurant at North Yorkshire's Grassington House Hotel — which she left to join Mehlman in Woodstock.

Before landing in the UK, Saromova cooked in her native Latvia, as well as in Italy and southern France. Her dinners have a classic French bent both in technique and formality. At the Lincoln Inn, meals are five-course prix-fixes, a relative bargain at $55. There is only one seating, at 7 p.m.

Though the restaurant can seat 63 people, Saromova insisted that she serve no more than 26 each night, to guarantee the perfection of every plate. "I want everybody getting their plates together. Maybe even talking with other people about the experience they're getting," the chef elucidates. While diners get cozy, Saromova chooses to work alone in the inn's large kitchen.

Guests can heighten their camaraderie with a predinner stop in the inn's front tavern, styled to look like a spot where the Green Mountain Boys would have been comfortable throwing back a few. By contrast, the gilded dining room would probably just have made the Allen boys uncomfortable.

Ethan and Ira might have been nonplussed by the amuse-bouche served at the dinner I attended, too. Instead of the single bite one might expect, each diner received a piece of pressed terrine striped with slices of tomato, red beet and fresh basil, accompanied by a barely sweet scoop of basil ice cream. It was a taste of summer that paired strangely with the snowy view outside, but was no less refreshing for that.

The amuse-bouche was a deviation from Saromova's usual pattern of using only the freshest seasonal ingredients. She does everything from scratch, including taking apart whole squashes instead of buying the precut pieces her supplier suggests. Two different petite dinner rolls emerge from her oven each night, served with melty, homemade compound butters. The night I dined at the inn, chive butter made the warm rolls — one wheat, one white — taste like steak frites.

In England, Saromova recalls, "Somebody would knock on the door of the kitchen and bring me pheasant or rabbit that's still warm." It's been a challenge to find game suppliers in the Upper Valley, but Saromova has established relationships with local meat farmers so she can meet and inspect their animals before slaughter.

Saromova is still debating whether she'll raise her own chickens for the restaurant, but she has definite plans to build a greenhouse and start plants there when the snow melts. In addition to basic herbs and greens, the chef envisions stocking her garden with unusual veggies. "I don't like the big [American] cucumbers," she complains. "They're not tasteful. The cucumbers from Russia, from Latvia, they're small and just full of taste."

And in Saromova's oeuvre, taste is of the essence. When I sampled her fare, one appetizer featured a pair each of chunks of tender lobster and seared scallops, both served over little yellow kernels. At first glance, these appeared to be corn, but once in my mouth, they proved to be a brunoise of mango and pineapple that burst with juice. Atop the buttery seafood, candied lemon peel added another dimension of sweet-and-sour pop.

This was Saromova's paean to the sea. On the same plate, a fricassee of rabbit and wild mushrooms was served in a puff-pastry shell, all dark earth and cream in a buttery frame. The dishes could hardly have been more different, but what united them was Saromova's love affair with big flavor.

"When I think about a new dish, what I have is all the flavor in my mouth, when I'm creating something and when I'm drawing it on a piece of paper," Saromova explains. "I feel all of that in my mouth — how it's going to blend together and what flavors I'm going to get out of the plate."

Saromova recalls that when she combined duck and monkfish in foie gras vinaigrette one night, Mehlman was convinced it was a bad idea. Until she tasted it, that is.

The chef says that steering clear of flavor risks would be stultifying to her. When she and Mehlman recently dined at one upscale Woodstock landmark, Saromova was horrified to see both her meat plate and Mehlman's fish dinner served with the same sides of green beans and mashed potatoes. "I'm looking at this plate and I'm asking, 'Why is it so boring?'" she says. 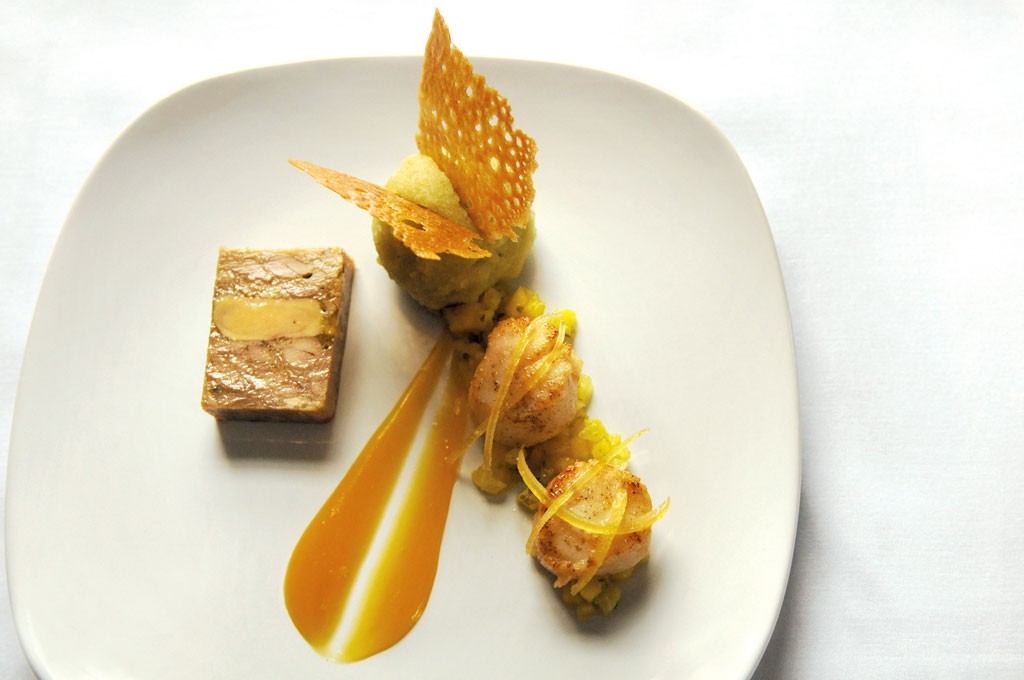 Even when cooking highly traditional recipes, Saromova takes pains to keep things interesting. Her filet of cod à la Viennoise was seared and served over spinach and under an ultrafine mushroom duxelles and herbed bread, which looked more like an omelet than the traditional crumb topping.

But this was more than a flashy fish dish. Presented in a complex, creamy lie de vin sauce with a wash of Burgundy, the cod came surrounded by an arrangement of textbook tournéed potatoes and zucchini slices. Each of the latter slabs held a pile of agrodolce red peppers and a single crisp length of asparagus. There was unquestionably a lot going on, but in this case, "a lot" was just the right amount. Had a single ingredient been selectively reduced, the dish would have lost some of its impact.

This Woodstock revolution almost didn't happen. Mehlman, a native of Los Angeles, had dreamed of opening an inn in New England ever since she took a spur-of-the-moment bike trip to the picturesque town in 2007. But despite their civil partnership in England, Saromova couldn't come to the U.S. as her spouse until the Defense of Marriage Act was overturned in 2013. "We were waiting year after year for the end of DOMA to happen," Mehlman says.

After it did, Mehlman embarked on a fruitless real estate search through New Hampshire that ended in a quick side trip to the Lincoln Inn. She fell in love with the circa-1875 lodging. Though it was a little pricier than she'd hoped, she bought the inn and moved to Woodstock in April. Saromova joined her in September, and the pair, now moms to two whippet puppies, were legally wed on October 17.

Mehlman admits that negotiating immigration laws has been daunting. But living in Vermont is an unexpected development that still feels dreamlike to the West Coast girl. "Right now I'm looking out the window at the [Ottauquechee] river and hills, and everything is covered in beautiful white snow. I say, 'Is this real, or am I gonna wake up?'" she says wistfully.

The love story that crossed continents has a sweet ending, and dessert at the Lincoln Inn offers many more of them. A puckery round of passionfruit cream filled my dessert plate, haloed with daintily cut diamonds of gelée made from mandarin oranges that Saromova squeezed by hand. To one side, a rectangular flurry of powdered sugar created an impression of sun hitting snow. The brightness might have been blinding if not for a little contrast: a pair of cigar-shaped sesame cannelloni filled with mild citrus cream.

No, that dinner will never happen again — but food is, after all, ephemeral by nature. Happily for future diners at the Lincoln Inn, Saromova and Mehlman's passion for creating a one-of-a-kind experience is anything but.

Speaking of The Lincoln Inn & Restaurant At The Covered Bridge